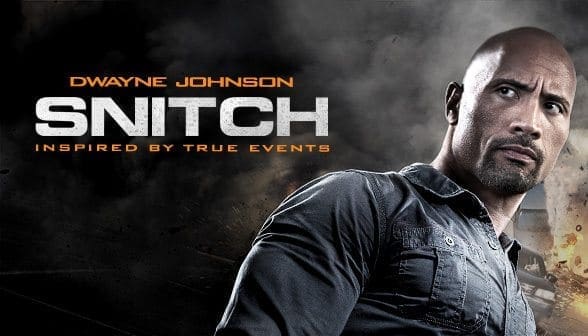 I am not afraid to snitch. If I was ever in a situation again where I had the opportunity to snitch and it meant that the “bad guy” would be put away, I would do it. I’ll tell you why, if they ever decided to come after me I’m going to fight back. Snitch: The Jim Lincoln Story. Sounds pretty cool. I’m not saying it would last very long, but anyway. Snitch is set up a little different. Jason, played by Rafi Gavron, is your typical dumb kid dealing with his parents, Dwayne Johnson and Melina Kanakaredes, divorce. He sort of, but not really, agrees to have a package shipped to his house that contains ecstasy pills. When the package arrives Jason is surprised to learn that it has been intercepted by the DEA and they have placed a tracking device in the box. What follows is a heart pumping scene when Jason panics and tries to run only to be apprehended a moment later. Once all is said and done his father, John (Dwayne Johnson), learns that the person who shipped the package agreed to help the DEA in order for a reduced sentence. John tries to get his son to do the same thing, but is resistant because he doesn’t know any drug dealers and won’t “snitch” on any of his friends. This causes a problem for them because the movie places a large emphasis on the mandatory minimum sentence laws for drug trafficking, which are steep and he faces at least 10 years in prison. John offers to help the DEA make arrests in exchange for his son’s freedom.

I like The Rock (he will always be The Rock to me) and he has some pretty decent acting chops, when he’s not doing The Game Plan. Going into this I expected him to be kicking ass and taking names, when in actuality he’s the one who gets his ass kicked. At one point he gets beaten by some gangsters and doesn’t even through a punch. It was obvious this wasn’t written with him in mind so he’s a bit miscast, but still delivers a believable performance. Before you start thinking this is Death Sentence or Black Dog starring The Rock I’m going to deflate your balloon right there. This is a drama about a father trying to prove and redeem himself to his son via trying to free him from prison. There are only two action scenes in the entire movie, one of which I found to be a little ridiculous in such a grounded movie and the other left me wanting more. The lack of action was a little disappointing to me. Like I said I expected The Rock to be kicking ass and, although I hate it, clotheslining baddies and he does none of that.

The movie is chock full of talent, my favorite being Barry Pepper as the weathered DEA agent in charge, and these players help elevate the movie, but it isn’t quite enough. The Walking Dead’s Jon Bernthal has an important role in the movie, and while he does a good job with the character, he’s almost pointless. He’s only there so The Rock can make his connection to the criminal underworld. This is a throw away role that is elevated to needless levels. Besides Bernthal’s character, there isn’t a weak link in the chain in that regard, the problems arise in the story’s narrative and direction. The message driving the movie is not ignored or forced on you in anyway, but it was a bit mishandled. The narrative may have been better suited for a court room drama. Director Ric Roman Waugh has been in the business for a while, although only directing a few features and doesn’t seem to know what he wants out the movie. He employs the documentary style filmmaking to a point that’s annoying. I kept moving my head in hopes to look around whatever object was blocking the image, but to no success. The pacing is extremely slow, even for a drama and I use that term loosely. Usually in movies such as Snitch the hero’s family is threatened and you are meant to feel that they are in danger. While this does happen in Snitch I never really cared. When they were threatened the thought that popped into my head was “he’s not going to do anything.”

Snitch is not a dull movie and it isn’t trying to be something that it’s not, but I felt like I was watching half a movie. If the story had been developed a little further, incorporating the trial and sentencing aspect, as well as the danger these characters placed themselves in, it could have been more enjoyable and possibly could have been like a drug related Heat.

Synopsis: A father goes undercover for the DEA in order to free his son who was imprisoned after being set up in drug deal.