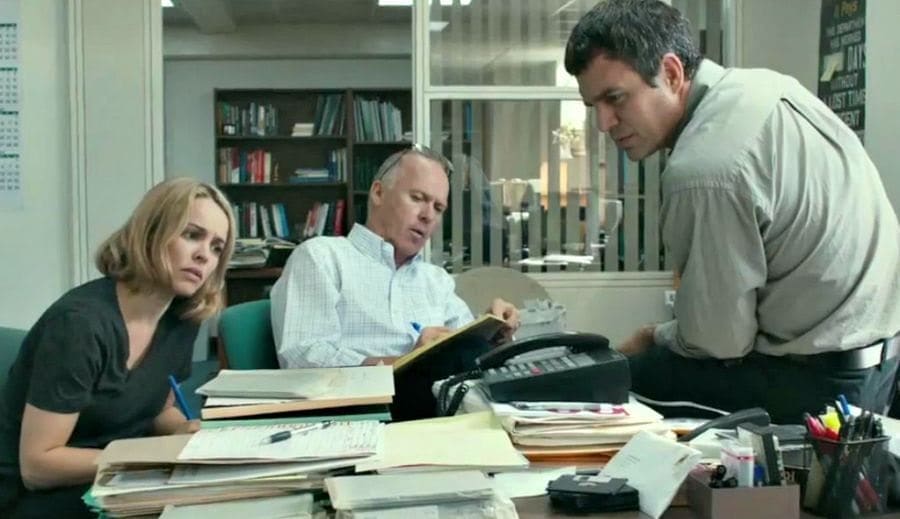 In January 2002, The Boston Globe ran one of the most controversial stories in the paper’s history: the coverage of the Catholic Church’s sex abuse scandal and cover up. Spotlight, titled for The Globe’s investigative news team run by Walter Robinson (Michael Keaton), exposes the sexual abuse of eventually 249 priests in the Boston area. The ensemble cast features Mark Ruffalo, Keaton, Rachel McAdams, Liev Schreiber, John Slattery, Brian d’Arcy James, Billy Crudup, and Stanley Tucci, and each played their roles in perfect balance throughout this film. Keaton’s “Robby” Robinson has run the Spotlight team at The Globe for decades when a new chief, Marty Baron (Schreiber), is brought in to supposedly “clean house”, but quickly he latches onto a buried story about child abuse by Catholic priests in the Boston area. He assigns this story to Keaton’s Spotlight team led by reporter Mike Rezendes (Ruffalo) who has top billing for this film, deservedly so. McAdams and James round out the Spotlight team.

The film spans the year 2001 and Tom McCarthy’s tight writing paces the film well (he also directs). Nowhere does the narrative feel disjointed or drawn out as the team systematically searches for clues that not only prove the priests’ abuse of children but also that Cardinal Law (Boston’s Cardinal) knew about the crimes for decades but failed to do anything other than move the offending priests from parish to parish. Shreiber, the outsider from Miami, doesn’t understand small community/large city connections when arriving in Massachusetts, and the running joke for the first third of the film is that The Boston Globe is suing the Catholic Church. Schreiber who deadpans most of the film does quite well as Baron, the new Jewish editor everyone initially dreads before getting to know him (the real life Marty Baron spent a decade with the Globe before moving into the top role at The Washington Post where he’s been since 2012).

For much of the film Rezendes tries to open sealed Church documents from the precedenting case against John Geoghan a Catholic priest who was prosecuted for sexual abuse in 1991 after three decades of evidence that was hidden by the Church and Cardinal Law. With the help of trial lawyer, Mitchell Garabedian (Tucci), who has 84 plaintiffs filing individual suits against the Church, Rezendes fights the good fight throughout the film. Ruffalo’s performance will surely snag several award season nods as will much of the cast.

McCarthy’s portrayal of the the victims truly as victims and the reporters who are less hero and more hard worker makes this a powerful film for this year. The interviews that Rezendes and McAdams’ Sacha Pfeiffer conduct with adult victims sometimes decades after they’ve been molested lends serious weight the importance of this film. Having grown up in a city community similar to Boston’s, this reviewer grew up hearing jokes about Catholic priests behind the robes, which may’ve diluted the story for me when it broke. Spotlight brings the story of what amounted to over 1,000 survivors stories (in the Boston area alone) back into the, well, spotlight.

Spotlight is one of the strongest films of the year, and, while it is clearly award-bait, the true (Pulitzer prize winning) story is important for not only its artistry but also for the message it holds.

Synopsis: In 2001, the new editor of The Boston Globe assigns a journalism team to investigate the allegations that an unfrocked Catholic priest had molested children from his parishes for three decades. The true story uncovers a Catholic Church coverup that reaches beyond Boston, MA to the ends of the earth.