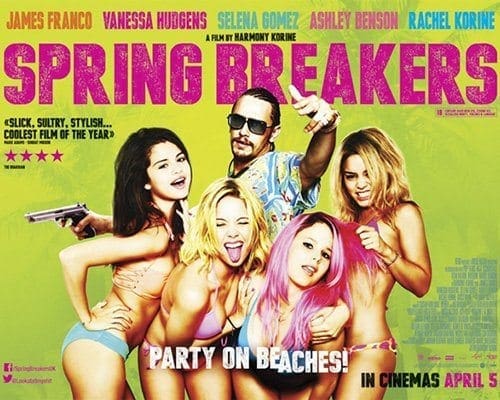 Pack your bags, kids, it’s time for spring break. That’s right, that time of the year where we get to cut loose and forget about our troubles. A preview to summer if you will. We get forget about finals, forget about grades, forget about bills and anything else we could remember to forget. Booze, remember the booze though. Neon lights flood the streets as bathing suit clad college students drink and party into the wee hours of the morning. Most people break away from their mundane lives to have a good time and that is indeed what happens. Some people, as showcased by Cops and other shows of the same nature, go to have a good time and end up on the wrong side of the law, or worse. The basis of Harmony Korine’s drug induced, alcohol fueled trip to hell deals with the latter two. Four college girls who are tired of staying home for spring break decide to head down to good old Florida for a week of debauchery and mayhem.

My spring breaks were never exciting. They usually consisted of me working or doing other non-exciting things, I even spent a week here in Phoenix sitting on my uncle’s couch watching movies while he worked, but if it wasn’t for that week I would’ve never been introduced to The Boondock Saints or Donnie Darko, so it wasn’t all bad. Spring Breakers is significantly more over the top than any vacation or bender you’ve ever been on, I’ll guarantee you that, well, maybe for a good majority of you.

The movie starts off with a version of a Girls Gone Wild video most likely ghost directed by Michael Bay filled with gratuitous use of alcohol, dancing, and topless girls. The word gratuitous plays a huge roll in this movie. Whether it’s alcohol and drug use, nudity, or James Franco, there is not one bit of it in short supply. Even the use of the neon color pallet, which is used to undermine the dark tone of the movie (more on that later), is in abundance, especially in our heroine’s wardrobes. I say heroine, but these girls are far from it. To start they steal one of their professor’s car and use it as a getaway vehicle for a brutal robbery of a local diner, the proceeds of which are used to finance their trip to Florida. It’s during a drug infused rager at a motel room, which was visualized in a way to make you feel like you were yourself high on cocaine, that the girls are arrested and faced with two days in jail or pay a hefty fine. With no more diners around to thieve the girls reluctantly opt for the jail time only to be bailed out by local rap artist-slash-drug dealer-slash-gun runner-slash-Britney Spears aficionado. He seems almost honest at first, albeit strange, but he’s actually the harbinger of doom for these girls.

Things immediately spiral out of control as one of the girls heads back home, while the other three adopt James Franco’s Alien as their own and begin to assimilate themselves into his violent lifestyle, almost like a sick and perverted version of Charlie’s Angels. Through flashbacks and flashforwards we are shown that the girls have taken to a life of crime and have adopted a sports team persona as they wear matching bathing suits and pink ski masks with unicorn patches sewn to the foreheads as they rob and assault unwitting tourists. Things get increasingly worse as the girl’s and Franco’s symbiotic relationship gets more and more dependent on one another.

If there was ever a movie for Disney’s starlets to help break their good girl image it is Spring Breakers. This movie is not for the faint of heart. Every effort is made to offend just about everybody. Don’t like drugs, it’s got drugs. Don’t like alcohol, it’s got alcohol. Don’t like violence, it’s got violence. Don’t like James Franco singing a piano rendition of Britney Spears’ “Everytime,” James Franco sings a piano rendition of Britney Spears’ “Everytime.” Selena Gomez is the good girl of the group and is the one that buzzes out early so she doesn’t get into much shenanigans, but Vanessa Hudgens sheds her Disney ears, along with everything else, in a pool scene that is sure to make her mom cringe.

There have been comparisons to Spring Breakers narrative style as a dream, but it’s closer to a hallucination than anything. The girls frequently phone their moms and their conversations serve as a sort of narration into what the girls are really thinking.

The beautiful cinematography is complemented perfectly by a surprisingly haunting score by Skrillex and Cliff Martinez. Skrillex “drops the bass” with his signature style house music or techno or whatever it’s called now which drives the hallucinatory scenes, but simpler, more melodic beats help build tension during the darker parts of the story.

From the first tension filled robbery to the final bullet filled, blood soaked moments of the movie Spring Breakers is a tense and wild ride that paints a dark picture about the seedy under belly of the spring breaking culture, if there is one, that should be used by parents as deterrent when their kids ask if they can go to the beach for spring break.

Synopsis: Four college girls who land in jail after robbing a restaurant in order to fund their spring break vacation find themselves bailed out by a drug and arms dealer who wants them to do some dirty work.