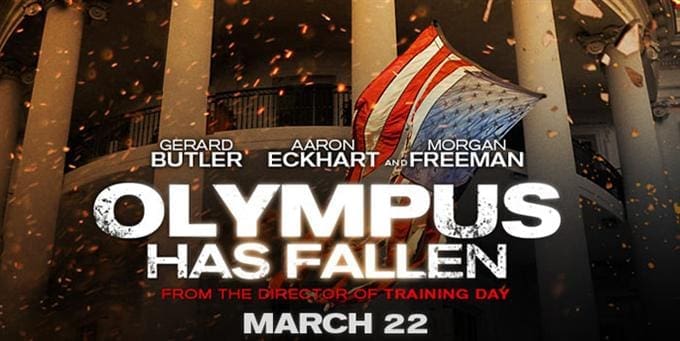 I miss the days of Independence Day and Air Force One when presidents fought their own battles. Even though Bill Pullman was kind of a dweeb he still said “you know what? Give me my helmet because I’m about to make a badass speech to a bunch of hillbillies who have no business flying billion dollar planes, but love their planet so much that they are going to take to the skies to kick E.T.’s ass and so am I.” Harrison Ford was like “unh uh, I ain’t getting in no escape pod when my family needs me, also terrorists suck.” Aaron Eckhart plays the president this time around in the first of two movies this year about the White House coming under attack from “threatening” bad guys, and he is not quite as wimpy as some other movie presidents, but *spoiler* he is a hostage through most of the movie. Gerard Butler is the ex-special forces guy who had a falling out with the president after he failed to save the president’s wife after she fell out of a car on a bridge. Sound familiar? It should. Olympus Has Fallen takes a lot of story elements from other action movies like Air Force One from the disgraced secret service agent, to the inept police and military forces who try to stop the incursion.

Not much. Gerard Butler is your typical badass who is trying to redeem himself after the president’s wife is killed so he heroically charges into the thick of things and miraculously survives the onslaught of enemy forces and single-handedly defeats literally everybody. This is the type of movie Butler needs to be doing, unfortunately he’s decided along the career path of the romantic comedies with such snooze fests as Playing For Keeps and P.S. I Love You. Well, P.S. you’re dead, leave your wife alone she needs to move on. The movie doesn’t pull any punches. It is full throttle action that doesn’t disappoint…if you can manage to turn your brain off for two hours. Also, Morgan Freeman.

The story driving Olympus Has Fallen is a cool concept, so cool Hollywood thinks we need two similar stories, but the heart on the sleeve story and action sequences are way over the top and borderline unbelievable. I’m all for suspension of disbelief, but there is a limit to how much I can take. For example the terrorists storm the building while one of those Hercules planes buzzes over the city spraying bullets into innocent citizens from four mini guns. The terrorists do have a goal, but it could have been better achieved than blowing up the front door and saying “knock, knock.” They could have removed that scene entirely and it would’ve made more sense and perhaps made the movie more intense. The biggest eye rolling moment of the movie was the use of the word “hashtag.” Yes, it is called a hash sign, but if you were born before 1990 and have ever used an actual telephone you know it as a “pound sign” or “key.” I bring this up because at one point the symbol is required for an important abort code and one character yells “hashtag. Hashtag! HASHTAG!” and because Butler’s character is not a dimwit he doesn’t know what it is. It gets better. A third character, instead of calmly explaining “actually what he meant was the pound key,” she says , and I kid you not, “shift 3”…go ahead, read that again. It explains itself. I also want to point out one last thing. This movie mimics Air Force One so much the moment Dylan McDermott, this guy: Shows up on screen I knew he was going to be a bad guy. He pretty much plays the equivalent of this guy from Air Force One: Olympus Has Fallen definitely doesn’t lack in the action department, but it’s kind of uneven and silly and most of the movie takes place at night with no power so it’s hard to get your bearings and know who’s fighting who. It gets points for being the first out of the gate, but I’m waiting to see what the original destroyer of the White House, Roland Emmerich, has in store for us with White House Down.

Synopsis: Disgraced former Presidential guard Mike Banning finds himself trapped inside the White House in the wake of a terrorist attack; using his inside knowledge, Banning works with national security to rescue the President from his kidnappers.

Beauty and the Beast | Movie Review