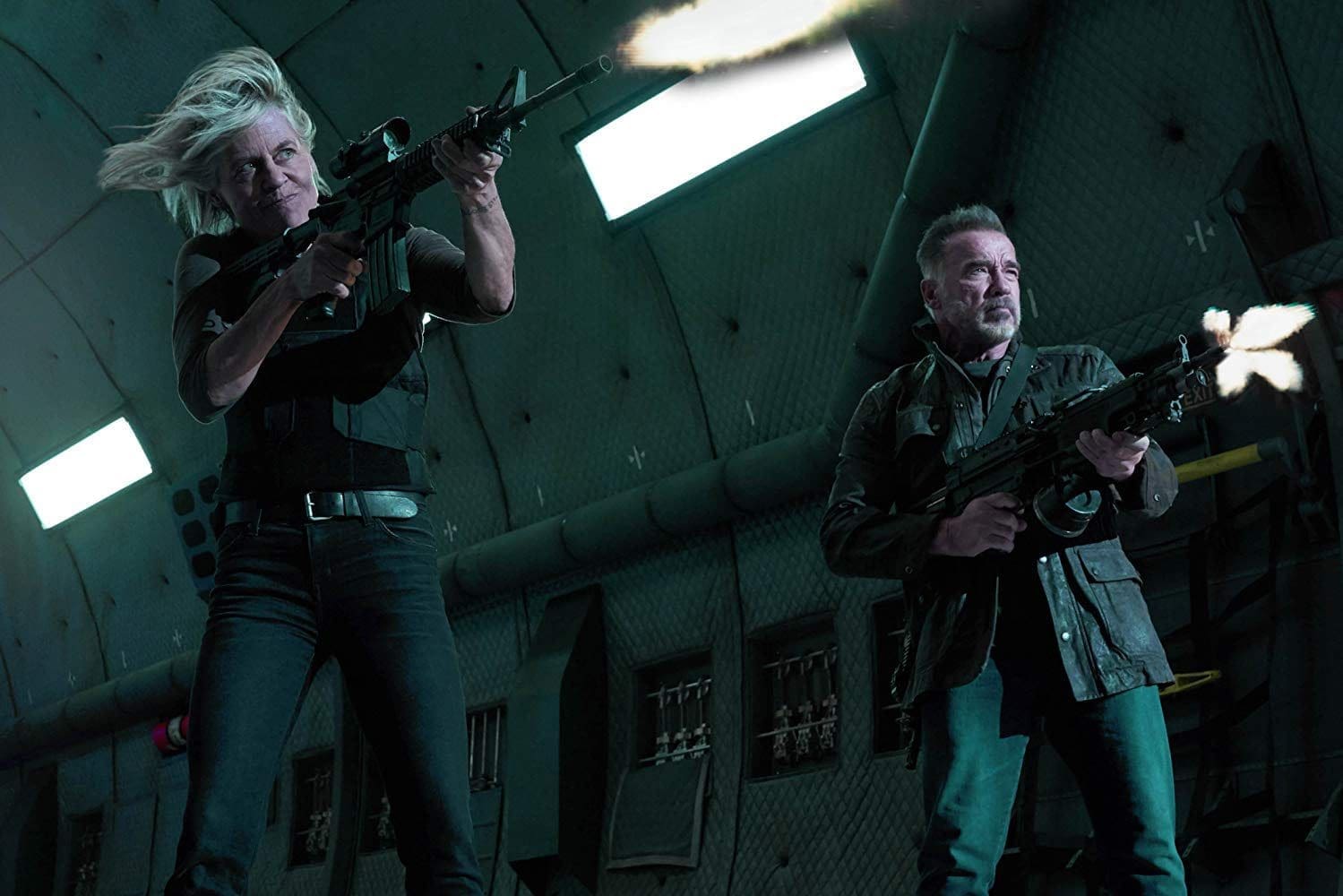 It’s been nearly 30 years since Terminator: Judgement Day, an iconic piece of film history that has set the bar so high for the franchise that subsequent sequels have not been able to compare. Terminator: Dark Fate comes close to reaching that bar as it introduces new Terminator models and characters while still showing us the fate of Sarah and John Connor. This film picks up where T2 left off and ignores all installments between, which is exactly what we need.

Dark Fate opens with a flashback of Sarah Connor and John Connor as another Terminator (Arnold Schwarzenegger) catches up with them after they saved the world from Skynet. It then switches to Mexico City’s present-day where a new protector, Grace (Mackenzie Davis), emerges from the future. She seeks out a young Mexican woman named Dani (Natalia Reyes) to protector her from a new type of Terminator; a hybrid of liquid metal and titanium skeleton. As Grace and Dani try to escape this new threat, Sarah Connor returns to help stop the future from happening again.

Linda Hamilton reprises her role as Sarah Connor and shows us what her life has become; a hardened woman with nothing left to live for. Of all the characters, hers has the most depth, and Hamilton’s performance is grizzled but subtle. It’s great to see her in this iconic role again and play off of Arnold Schwarzenegger who returns as the Terminator who killed John all those years ago.

The plot itself is straightforward; an indestructible killing machine is after an innocent person who is a key to the future resistance to machines. The strongest parts are the action sequences and fight choreography, which is surprisingly hands-on.

The high point of this film is Mackenzie Davis as an enhanced human with cybernetic parts. Unlike her machine counterpart, she is dangerously flawed, which leaves plenty of room for Hamilton and even Reyes to get in on the ass-kicking. Unfortunately, it also brings us to the only major flaw of the movie. There is no depth to these characters. They are bold. They are bad-ass. But they are essentially the same one-sided (male-coded) action stars we have had for the last 40 years.

Look, I enjoy mindless action as much as the next person. And if this movie couldn’t have risen any higher, so be it. But it could. It had all the pieces. And even had a whole series of perfect setups for it to go deeper. Hamilton’s lost child and failure to process even basic emotions. Davis’ power and vulnerability being both integral sides of her coin. Reyes’… well pretty much everything Reyes. Plus a fairly obvious relationship twist that I shall not spoil here. All of these and more could have been used to build our heroines as more than just one-dimensional action stars.

It may seem like a small thing, and if it was just another action movie, it would be. What makes it different here is how the movie as been billed and how it wants to present itself. The movie wants to be a girl-power action movie. An Atomic Blonde Terminator. And it could have been it. It has all the pieces, but none of the depth. I can’t help but wonder what difference it could have made if there was even a single female name in that story by/screenplay by list…

Tim Miller does a bang-up job with Terminator: Dark Fate when it comes to the action sequences, and the new lore it sets up for the future is interesting. I am curious to see if and where this franchise goes. But for next time, maybe diversify the writer’s room to get female representation.

Synopsis: A new terminator and protector are thrust back into the past to protect or destroy a Mexican woman who is vital to the future of mankind.

A look at the short film “North Bay”