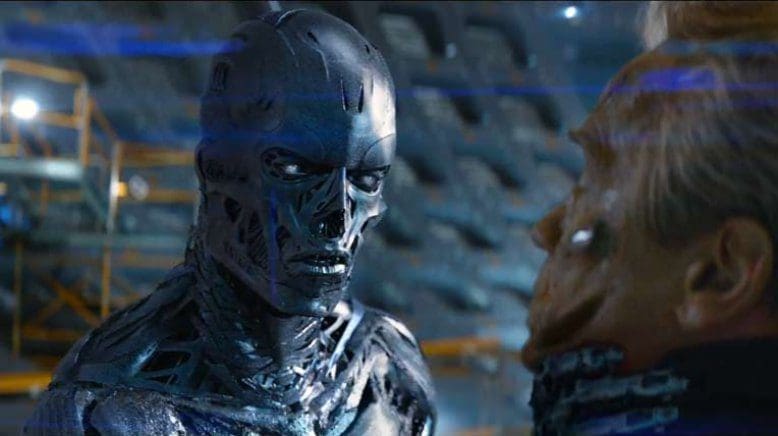 The Terminator franchise hasn’t had much success since the first sequel in 1991.  Writers have been struggling to come up with compelling ideas to continue the story and directors have failed to capture a fraction of the awe and wonder of the first two films.  Perhaps the studio felt that, with enough CGI, a movie with a cyborg would guarantee success.  After the failed efforts of Chappie, it should be evident that even the best effects can’t forgive a poor script.  It would have been nice to see James Cameron back at the helm, but his full attention is on three simultaneous Avatar sequels.  Instead we get Alan Taylor, who directed Thor the Dark World.  I enjoyed Dark World, including its occasional misplaced humor, so I was eager to see what Taylor had in store for us.  What I learned from watching this latest sequel is there is no one like James Cameron and imitation is flattering.

In Terminator Genisys, a prequel of sorts takes place as we see where Kyle Reese (Jai Courtney) starts his journey before travelling to 1984 and rescuing Sarah Connor (Emilia Clarke) from the first terminator.  He is inspired by the words and actions of John Connor (Jason Clarke) and determined to keep Sarah safe, but upon arriving in 1984 he finds that more than one terminator has shown up and Sarah Connor, the once innocent waitress without a care in the world, is now a badass warrior; who has been training for the cyborg apocalypse most of her young life.  Sarah’s been in danger since she was a child and, after an unfortunate encounter left her an orphan, has relied on the protection of an aging terminator (Arnold Schwarzengger).  None of this makes sense to anyone who has watched the original Terminator or its superior sequel, but the easiest explanation I can come up with is the results of successful time travel have allowed possible futures to revise history by sending terminators from alternate timelines into the past.  Confusing as it may be, it does make for some interesting storytelling.

One of the ways this movie changes history is by having John Connor become an antagonist.  A terminator attacks John in the future, giving him the power of man and machine, which causes him to rethink the global takeover of Skynet.  It’s up to Kyle, Sarah, and her guardian terminator to figure out the right date in time to finish off Skynet, and avoid John Connor in the process.

If I was to have you brush up on your Terminator film knowledge, I would watch both the first and second movies, but especially the first film because this one pulls a Back to the Future II situation by putting our familiar characters smack dab in recreated scenes, except with different actors.  You’ll find yourself smiling at the 1984 references, but don’t get comfortable because not much time is spent there.

I am impressed with Emilia Clarke’s portrayal of Sarah Connor, replacing Linda Hamilton.  Emilia’s character has more in common with the Sarah from Judgement Day than the first film.  She’s committed to fighting and knows almost everything that leads to humanity’s annihilation, up until the changes made by this movie.  The one common thread besides Arnold Schwarzenegger’s presence is Skynet, now evolved into a social media app and operating system.  With her terminator’s help, nicknamed Pops, and Kyle Reese, she makes a desperate attempt to destroy, once again, all hard drives containing Skynet and ending the new judgement day.

I rather enjoyed all the nods to the earlier two films, but I would have preferred the movie stayed in 1984 longer.  The familiar scenes in that time period make you miss James Cameron’s touch, but you still enjoy seeing them and it’s a fun ride as well.  I credit that entertainment to Arnold specifically.  His humor and delivery inject some much needed energy into the film.  I didn’t feel he was utilized well in Rise of the Machines, but that movie did have great action scenes.  In this film he has spent years learning how to be human with mixed results.  Don’t ask him to smile.  He also takes his comedic cues from Terminator 2, which is pretty much the tone for Terminator Genisys as well.

While I enjoyed Emilia Clarke’s talents, it became difficult to fully enjoy the dramatic elements due to the uneven pacing and script.  The action is of course a staple of any Terminator movie, but near the middle of the film it starts to feel forced.  A bad guy shows up for no logical reason except to start a car chase.  It’s a terrific car chase, but still.  Also the whole human race being threatened by a computer program feels like a Mobius strip of inevitability.  No matter the outcome of any of these films, as long as the idea of artificial intelligence controlling our defense systems is out there, we are never safe.  The studio is hoping to make a new trilogy out of this film.  I won’t complain if they do, but I hope whatever new evil terminator or A.I. shows up is as fun as Arnold on screen.  Jason Clarke just didn’t quite get there.

Terminator Genisys is the sequel we’ve waited years for.  It’s not the strongest delivery, but it’s a good film that stands on the shoulders of James Cameron while tracing its own path in the process.  Alan Taylor’s use of humor throughout is not unwanted, but he could try smaller doses.  Emilia Clarke is Sarah Connor for the new generation.  Schwarzenegger is the Terminator no matter how old he is and that is made very clear here.  I should also mention JK Simmons is great as a detective spending decades solving a time travelling robot mystery no one believes except him, but it’s a part I feel wasn’t deserving of his abilities.  Matt Smith plays another ancillary character that doesn’t get fully realized in this film.  Perhaps they are being saved for the sequel, but if you put great actors in a movie, give them something they can make shine.  Besides all that, including some glaring plot holes, I would recommend seeing this in the theaters.  Arnold is the big draw here.  He will make you laugh and pump your fists at all the right moments.  Don’t overthink the story and you’ll have a even better time.  It’s about cyborgs with big guns after all.

Synopsis: John Connor sends Kyle Reese back in time to protect Sarah Connor, but when he arrives in 1984, nothing is as he expected it to be.

I want to see this for sure! Looking forward to it more after this review! My friends have been a bit mixed…