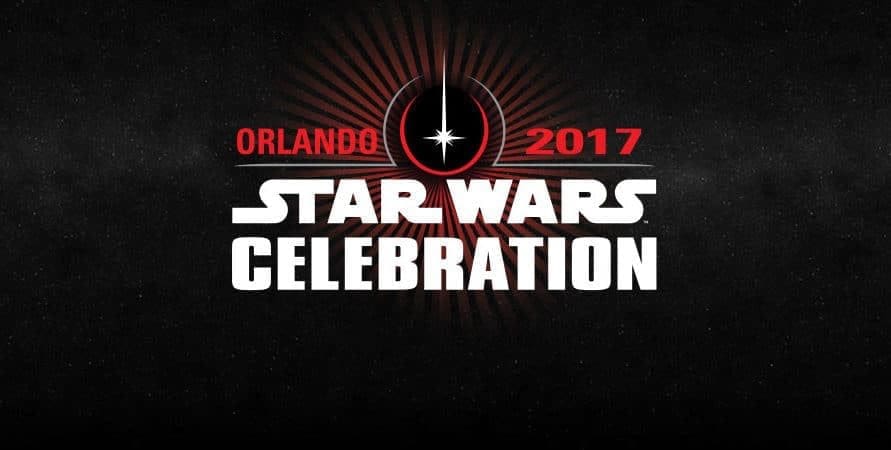 Star Wars Celebration 2017 was a grand adventure of galactic proportions! The event ran from April 13 – 16, 2017 and there were so many people to meet and things to see and do. We were only able to attend on Friday and Saturday but the experience was nothing short of incredible. Parking wasn’t terribly expensive and there were buses that drove attendees to and from the farther parking areas. On Friday we were able to get into the vendor/exhibition hall early and get photos of some of the amazing booths including the debut of Star Wars Lifesized (an exhibit with authentic character displays from the collection of Gino Sabatino). The character displays were incredibly detailed and life-like as they were meticulously recreated from original film production moldings and patterns. There were many artists in attendance also including Brian Miller, Joe Corroney, Lin Zy and Brain Rood of who were selling special beautiful Star Wars Celebration 2017 art prints. There were quite a few Celebration exclusive items that were available for purchase but there were a few that were highly sought after.

I happened to stumble upon a few of these high demand items while at Celebration. The first one and seemingly the one with the highest demand was something that I wanted the ‘regular’ version of but was ecstatic when I learned I would have an opportunity to grab a limited and exclusive Celebration 2017 copy of Timothy Zahn’s “Thrawn” novel. I had walked by the Del Rey booth Friday morning and spoke with them about the book when they informed me that they would be giving tickets away for people to buy a copy of the novel. They were strictly enforcing their rule of no loitering or forming lines near the booth (which I was very appreciative for since there were a lot of stories throughout the weekend of the bad experiences people had with lines forming early and no one enforcing the ‘no line’ rules that were made clear on the Star Wars Celebration website.). I continued to wonder about taking photos of cosplayers and checking out booths and made my way back about 10 minutes before the tickets were handed out. There were a lot of people starting to stand around the booth in anticipation for this special edition of the novel and as I stood there listening to the Del Rey representative explain the rules and that a Thrawn pin would be included with the novel before handing out tickets I felt people move in closer all around me and before I knew it I was elbow to elbow in a very large crowd of hopefuls. One woman was quite crafty and made her way to the front of the crowd asking if anyone had swag to trade with her. The crowd silently stared at her with their answer but she remained at the front of the crowd to get a ticket. The tension was very thick during those last few minutes before the tickets were passed out. You could see and sense the displeasure and anxiety of some people in the crowd. The Del Rey rep started handing out tickets and I was able to grab one and get in line to make the purchase although I did not know why people were trying so hard to get this book. As I waited in line I spoke with others waiting with me and discovered that the day before, on Thursday; over 2500 copies were supposedly sold. This was due to customers buying upward of 5 novels per person causing the shortage of books so that Del Rey was only able to give 50 tickets for Friday & 50 tickets for Saturday as well as having a raffle for another 75 books after giving the tickets away on Saturday. The $35 novel was being sold on eBay for as much as $199. I met so many people that wanted to get this that it is possible that someone could sell it at a marked up price. The Thrawn novel was such a big deal this weekend but there were other great panels that occurred. The biggest of which were The Last Jedi, Carrie Fisher Tribute and Rebels panels. I was only fortunate enough to get into The Last Jedi panel but it was well worth the trouble as I was able to go into the Galaxy Stage room where the president of Lucasfilms(Kathleen Kennedy), The Last Jedi director (Rian Johnson) and cast appeared on stage to discuss the upcoming film. There were a lot of great moments and amazing production photos displayed on screen for everyone to enjoy. Before they ended the panel they showed the trailer for The Last Jedi twice as they traditionally have done. As people left the panel they were given posters for The Last Jedi film that were revealed during the panel, very much to the delight of the attendees. This very same poster is now highly sought after and is even being sold online for as much as $100 to $300. I heard nothing but good things about all the other panels at Celebration.

Other exclusives included the Luke Skywalker in X-Wing Pilot gear at the Hasbro booth, Funko Pop exclusive figures and much more. Hasbro also gave a preview of their San Diego Comic Con exclusive Thrawn Black Series figure which will definitely be a hot item this year.

There were complaints about organization logistics as far as how lines for panels, booths, and the Celebration Store were being regulated but I also heard about fans being rude and even violent towards volunteers and I could absolutely see it happening from both perspectives. The line for the Celebration Store was about 3 hours wait time average at any given time throughout the weekend. Other lines for items were a lot shorter in wait time; about 30 to 90 minutes. Fortunately, I heard about many more positive experiences than negative but there were enough negative experiences for Lucasfilm, or whoever runs Star Wars Celebration, to listen to the fans and re-evaluate how this year’s Celebration was run to make improvements for 2019 and future events. I personally had a fantastic time and enjoyed interacting with all the fans. Booth personnel was always very courteous and helpful. I was even able to go to an evening event for Star Wars Old Republic which was hosted by the developers of the game. At the event, they gave away drink tickets and free t-shirts and there was a section for people to participate in a LAN party gaming event. Celebration is not only a great event for the family but also for people of all ages and I look forward to going to the next one in 2019.

View our photo gallery of the event below. Photos by Charles Brown. All rights reserved.

COMIC AND MEDIA EXPO 2015 is back for its second year!!