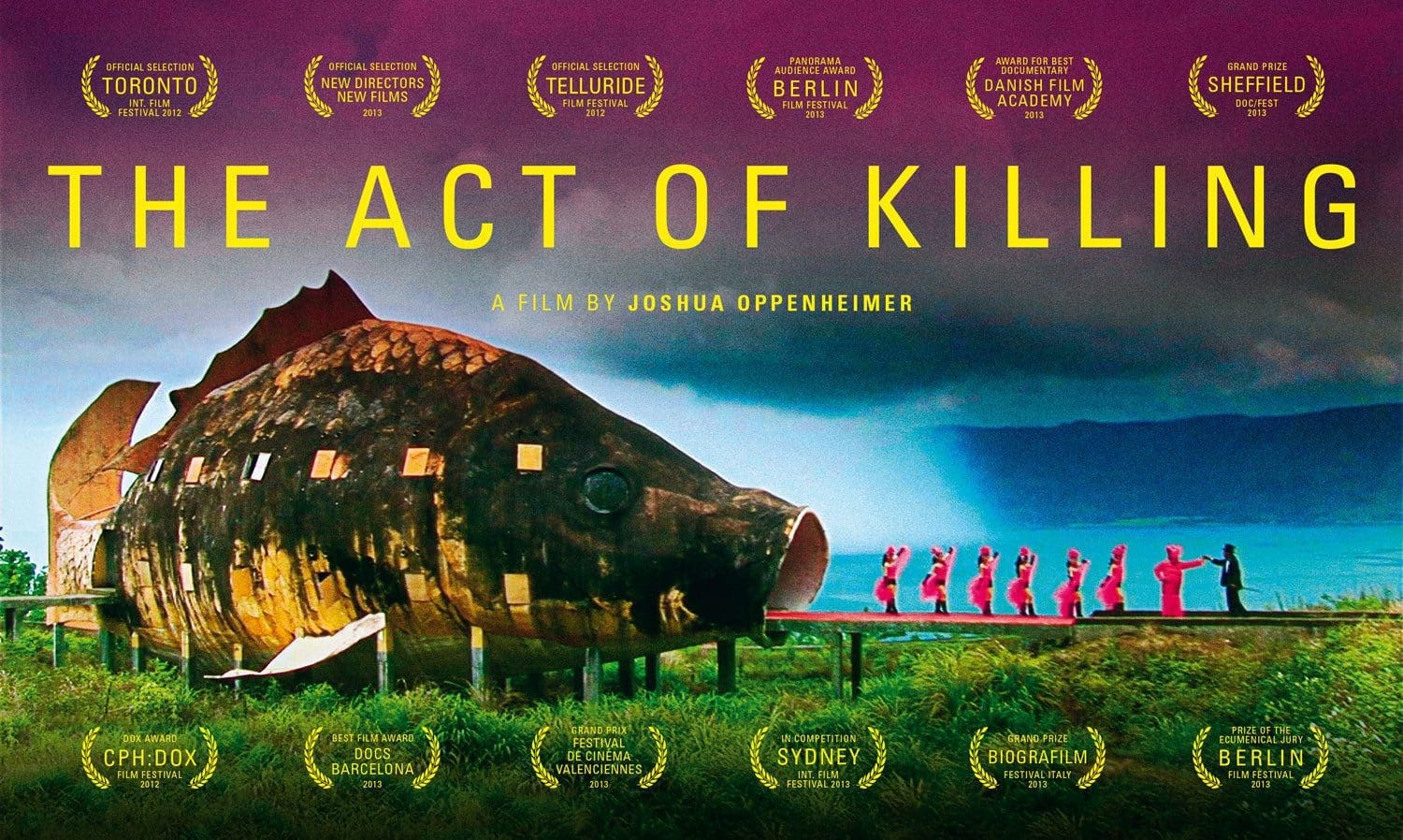 Right off the bat, The Act Of Killing kick starts with the words, ‘It is forbidden to kill. Therefore, all murderers are punished, unless they kill in large numbers, and to the sound of trumpets.’ If you had any uncertainties of what the film would be about it, it has now been made so very clear.

The film opens on Anwar Congo, calmly walking through a sea of people with his crew, seeking actresses. They test out some of the acting from the locals, focused on mothers and their children, begging and crying not to burn down their homes as Anwar watches in the distance. A subtle smirk on his face. The atmosphere is set.

Anwar speaks freely and easily about mass murder and the stench of corpses. It’s eerie to witness a man talk about death with a smile on his face, all while knowing that every moment we as an audience witness is very true and real. Only 10 minutes into the film and I felt incredibly uneasy. The terror that Anwar and his gangsters present only continues to heighten at a rapid pace. There is so much laughter and joy shared between them. They love each other like family, yet killed like they had nothing left in the world. It’s very easy to forget just what these men were capabe of. All the lives lost solely because of the comman of one man, Anwar.

Scenes change from moments of inside jokes and shared laughter to aggression and violent monologues. What really works for the film is when they show Anwar how he looks and acts on camera by revealing edited clips from days already shot. You see Anwar analyze the scene and when he finally speaks out, it’s in regards to his mistake in wardrobe for that day. Not at all on the fact that he’s reenacting how to kill someone with less blood spilled so that there is less of a mess.

“I wore jeans for killing.” One of the many haunting lines from Anwar. A man so removed from humanity. From right and wrong. A man who looks past the bloodshed and sees no wrong. This can be seen as the scariest kind of person, one with no understanding of the evil they commit. Because he lives and does as he wishes. As he would say, he’s a gangster. A free man, free to do whatever he wishes to do.

“Killing is the worst crime you can do- So the key is to find a way to not feel guilty. It’s all about finding the right excuse.”

A lot of the people ‘acting’ in the film for the reenactments, I feel, are finding it very easy to put themselves in a victim of crime’s shoes. So many moments are so incredibly haunting and eerie. So very realistic it’s damn near terrifying. And you can see it in Anwar and his fellow former-executioners eyes. The memories flashing before their eyes. The cries for help and mercy ringing in their ears. And just like that, they all shake it off and manage to bring a smile to their face. And the audience is left staring in disbelief. Unsure of how to react.

Anwar Congo, spoken as a movie theater gangster and executioner of hundreds of communists, stands witness to one of the reenactment scenes where an entire village is being wiped out. Ordering people to capture runaways. Observing the chaos and destruction surrounding him. So much hate on display for the world to see. Surely you’d think all this evil would hit him right in the heart. And slowly but surely through the cours of the film it does. You see him slowly become effected by all the wrong he’s done. But do we sympathize?