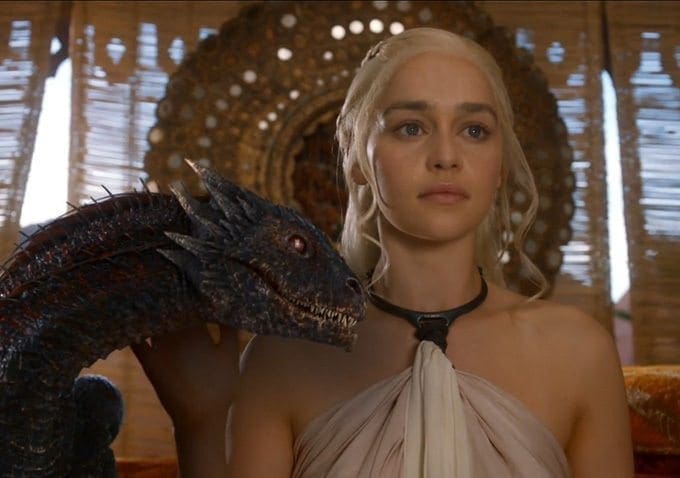 I am going to jump around with this week’s installment, simply because it was a jump around kind of episode. Written by GRRM, this episode was far different from his last effort with Blackwater from season two. Where Blackwater stayed focused on one story for the entire episode, The Bear and the Maiden Fair was just as good, but all over the place when it comes to story arcs. This is not a bad thing mind you, as these stories need to be told, and no matter how much we want more episodes per season, it’s just not going to happen.

Let’s start with the Starks. Rob’s seemingly in big trouble with the war. He is losing too many men too quickly, and he has had to spend too much time off the war effort with family issues. This week we find out that he is also now going to be a father. The holdup from getting to Lord Frey’s for the wedding of his uncle Edmure is sure to cause even more problems.

Bran is still being counseled by Jojen, and Osha doesn’t much care for it. We hear her story about being North of the Wall and her man turning into a Wight, which was a pretty intense scene (hats off to Natalia Tena for making it such).

Arya is still upset with the Brotherhood for selling Gendry off. We did get an awesome quote from her with her answer to “Who is your God”, to which she replied “Death”. She ran off to find herself being caught in the woods by The Hound.

In Kings Landing, Sansa was talking to Margaery about having to marry Tyrion, and it was almost like Margaery was reading the viewer’s mind when she mentioned that she doesn’t have to marry Joffrey anymore.

Jon Snow is still traveling to Castle Black, but was able to confront Orell about that whole “cutting the rope” business. Orell is playing both sides with his jealousy of Jon with Ygritte. It will be interesting to see how it all turns out with the battle they are planning, but if history speaks true, it won’t end too well for the Wildlings. Jon might be a bastard of the North, but at least he remembered his history lessons.

Going back to Kings Landing for the scene that was both awesome, but also left me looking for more, was in the throne room with King Joffrey and Tywin. I loved how it played out; I just would have liked to see Tywin reel him in a bit more. His smirk as he walked away was priceless.

Poor Tyrion just can’t win. Between Bronn putting evil thoughts in his head, and having the least understanding girlfriend in the entire world, you’d think the guy was cursed. We will see how things move on with the wedding soon. I am just hoping that it is going to be this season. Daenerys and her ever-growing dragons did a good job of scaring the pants off the Razdall. She is going to have to sack all the slave cities outright if her negotiation tactics remain the same. I still think the transformation from the Dany of season one to the Dany who doesn’t take any guff from anyone, is one of the best arcs of the series.

The winner this week has to go to Jaime and Brienne, again! You could almost tell that Brienne didn’t know what might happen to her after Jaime was gone, but she knew it would most likely end her life. I am probably not the only one who wanted to see Locke get his comeuppance this week, but Jaime jumping into the bear pit unarmed and without a plan was great.  I think it will do its job of turning those non-Jaime fans over.  His transformation from season one has to be at least as good as, if not better than Daenerys’.

With only three more episodes this season, things are heating up in intensity and a lot of the stories are wrapping up, while some of the others are just getting started. It will be interesting to watch everything unfold in the next couple of weeks. Just in time to wish the seasons were longer again.