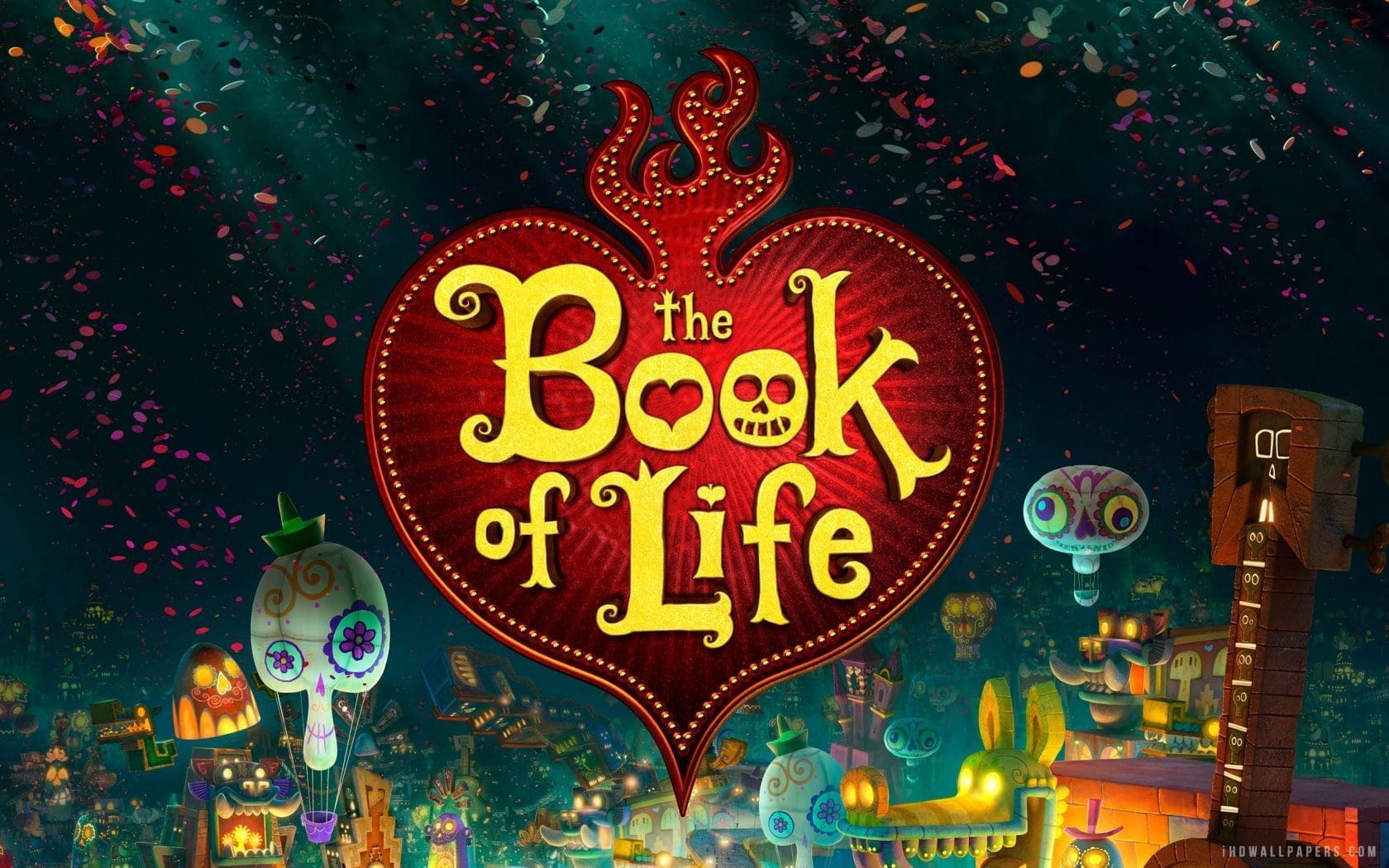 Too many cultures in western civilization fear death and the uncertainty of afterlife. While many religions tell their children tales of what happens after death or even demonstrate how they fear death, the Mexican dia de los muertos (day of the dead) has consistently approached death as a natural extension of life –something to embrace and celebrate. Guillermo del Toro’s (producer) new Fox Searchlight pictures’ The Book Of Life brings this concept to the big screen in an animated feature film that does just that.

The Book of Life opens with an extended exposition of the juxtaposition of the “Land of the Remembered” and the “Land of the Forgotten” with the remembered being chock full of colorful sugar skulls, dancing mariachi skeletons, and the ancestors of those who’ve gone before being remembered and celebrated around the Nov 1-2 holidays. While both of these lands are obviously subterranean, the forgotten land is deeper and darker where souls who’ve been forgotten go to disintegrate into nothingness.

These two lands are controlled by mischievous La Muerte (Kate del Castillo) and Xibalba (Ron Perlman) who make wagers to determine who controls the much cooler Land of the Remembered. These two look down upon the small Central Mexican town of San Angel that’s coincidentally in the shape of a vihuela (guitar). Early in the film the audience is introduced to Manolo (Diego Luna), a young boy from a bull-fighting family who inspires to be a great guitar-playing musician, his best friend Joaquin (Channing Tatum) whose father was the countries greatest fighter, and Maria (Zoe Saldana), their best friend who both are fated to fall for. La Muertre and Xibalba wager who’ll marry Maria for control of the upper world, but Xibalba is a sneaky devil who tips the scales in Manolo’s favor.

The film flashes forwards to adulthood. Maria who’s been sent to finishing school in Spain returns to her hometown an articulate, modern woman with forwarding thinking ideals. Manolo has always struggled between being the bullfighter his father, Carlos Sanchez voiced by Hector Elizondo), expects him to be and the musician he wants to be, while Joaquin (with the help of Xibalba’s talisman) has followed in his father’s footsteps to be a great protector of Mexico. All three resituate themselves as adults and the conflicts ensue as both men attempt to win Maria’s affections. Conflict ensues, and what I love about this film is that I could not ascertain how it was all going to end.

Most of the film takes place on the Day of the Dead, and Manolo is forced to quest after his love for Maria. This carries him to the afterlife, and director Jorge Gutierrez does a nice job of extending the life we live into an afterlife describe in the film as “brighter, more colorful” where these characters see their lost loved ones again. While this perspective isn’t shared by some religions, the writers didn’t make a huge deal out of this element of the narrative. Through Xibalba’s deception Manolo meets his entire ancestry including his mother Carmen (Ana de la Reguera) who scolds him for joining her in the afterlife “too soon” and his grandfather Luis (Danny Trejo, is he in every movie that has to do with Mexico?) who at times is just a skull that Carmen carries around.

As Manolo fights for the women he loves in the underworld, in San Angel, Joaquin continues his own journey to not only win Maria but to also become the town hero against the big bad who is threatening to destroy the only home most of these families ever love. Together these three and their host of dead and undead ancestors come together to build to a satisfyingly fresh climax that gives the audience a sense of accomplishment for these characters they comes to love through the film.

As a former music editor, I can’t divorce my reviews from the music or score in these films, and I first noticed this soundtrack while we waited for the lights to go down. Mumford & Son’s “I Will Wait” was playing over the speakers but sounded as if mariachi was performing the song. It wasn’t awesome, but I like variations as much as the next music aficionado. Once the movie started I heard other popular tunes such as Radiohead’s “Creep” and Elvis Presley’s “Fools Rush In” that morphed into an original song by Paul Williams and Gustavo Santaolalla called “Can’t Help Falling In Love With You.” The original tracks were catchy, and I was impressed that Diego Luna performed all of his own vocals. But beyond all of that, the best tune of the film was Cheech Marin (who voiced one of the mariachi members) singing Biz Markie’s “Just a Friend”. Performances like that just made this a feel good soundtrack for a feel good film perfectly released at the beginning of this Halloween/Dia de los Muertos/Harvest Season.

While The Book of Life’s plot isn’t necessarily original, the animation is top notch. This screening was in 3D, and it seems the film was made to be seen this way. There wasn’t any gimmicky 3D scenes, just subtle animation that is more effective visually. The film opens wide on October 17, 2014. Grab your Pumpkin Spiced Latte, dress your kids in their favorite sugar skull makeup, and make it an afternoon to see this film. It’ll play in both 2D and 3D but trust me that 3D is the way to go.

About “The Book of Life”

Synopsis: Manolo, torn between his love for a woman and loyalty to his family, sets out on a quest to save his town with his best friend Joaquin. This quest takes him through the underworld and relies heavily on animation that focus on the Mexican dia de los muertos.

“THE FAULT IN OUR STARS” Movie Review