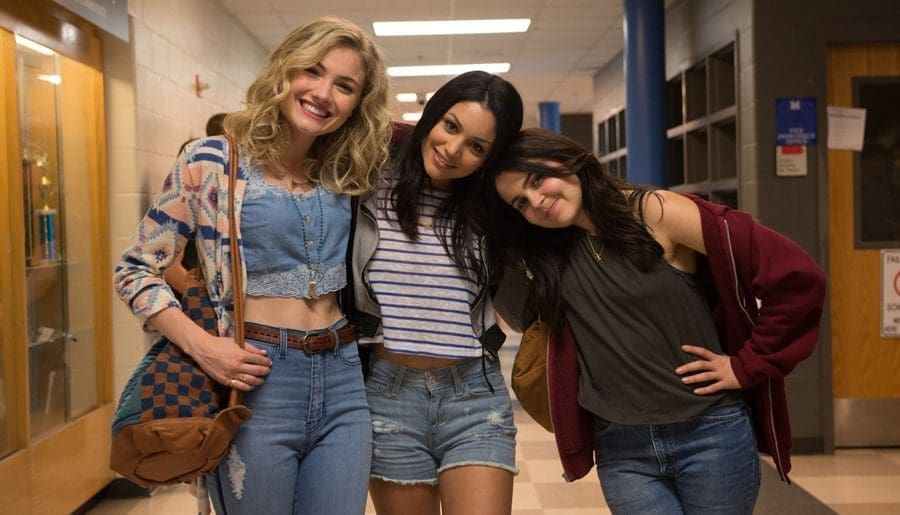 It should be noted that I am not a teenage boy, or girl for that matter, so my opinion of this film won’t carry much weight.  Although I have seen my share of high school romance comedies.  Some have been very fun and memorable and others require you to scroll past their poster on Netflix before it rings a bell.  Many carry the familiar formula of an uncool person trying to reinvent themselves so their peers will like them, with the help of someone they usually wouldn’t hang out with.  Can’t Buy Me Love, She’s All That, and Mean Girls comes to mind.  Since every decade needs to retell this story in a slightly different way, it makes sense for Hollywood to come out with another one now.

In The Duff, directed by Ari Sandel, Bianca (Mae Whitman) is your typical unpopular girl with two very popular friends, Casey and Jess.  There’s also Madison and Wesley (Bella Thorne and Robbie Amell), a couple who break up regularly.  Madison is your typical passive aggressive, sadistic teenager, which they highlight early on, and Wesley is the typical hunky jock who lives next door to Bianca and suffers from foot-in-mouth disease.  During a party at Madison’s, Wesley explains to Bianca that she is a DUFF, a designated ugly fat friend.  According to his theory, boys find her approachable and friendly, but only talk to her so they can get to know more about Casey and Jess.  All high school groups have their duff, Bianca is led to believe, and this strange logic drives her to dump her only friends in the hopes of achieving a true identity.  She then strikes a bargain with Wesley and offers to help him with his chemistry work so he can play football again and get a college scholarship if he, in turn, helps her dress and act more confident so she can attract a super hot boy named Toby (Chris Wylde).

The only real addition to this same-ole story is the use of viral videos.  Embarrassing photos have been around for decades, but they still had to be passed around.  Now something scandalous and incriminating can be seen around the world in a few seconds.   When Bianca’s crush for Toby is broadcast throughout the school via the internet, her efforts to standout take an ironic turn for the worst.  It’s possible that the harassment she endures because of these videos might lead her to commit suicide, but this is a teen comedy and not a Lifetime movie.  Fortunately Wesley is there to help her out and keep her focused and upbeat.  Her mom, played by Allison Janney, is also there to provide words of wisdom, because she happens to be a motivational speaker for divorced people.  Can Bianca ignore the pressures of ridicule and alienation to finally triumph over her insecurities?  Unless this is a German art film, I can’t imagine this ending up unpredictable and sad.

The funny thing about these kinds of high school movies is they are supposed to teach you to be yourself, regardless of how uncool it might appear to other people.  Bianca sort of already knew this, but abandons this principle to get with a guy she barely knows.  She only relearns this lesson when her plan brings her closer to the man that has been by her side this whole time and that person likes her for who she is, even though he is a douche for most of the movie.  One other cliché they give Bianca is the job of journalist for the school newspaper and her teacher, played by Ken Jeong, wants her to write an article about what homecoming means to her.  Luckily this emotional whirlwind of social media and relationships gives her plenty of inspiration.

The target audience for this movie will enjoy The Duff.  It is funny at times and hits all the right sentimental moments.  Robbie Amell is great as the douche with a heart of gold.  Mae Whitman plays the lead well and you do hope she finds closure at the end, or just beats up Madison.  Bella Thorne’s Madison is pretty one-dimensional, but that’s not uncommon among bully characters.  It would have been nice to see her back story the way we kind of see Wesley’s.  I also enjoyed Chris Wylde and Ken Jeong, who play the only teachers with funny dialogue.  I would recommend this for anyone under 19 and on a date, or if you are huge fans of Mae Whitman.  There are moments that will make you laugh no matter how old you are and you will find someone in this movie that you may relate to because, as all high school movies suggest, you may have been a duff at one time in your life.

Synopsis: A high school senior instigates a social pecking order revolution after finding out that she has been labeled the DUFF (Designated Ugly Fat Friend) to her prettier more popular friends.