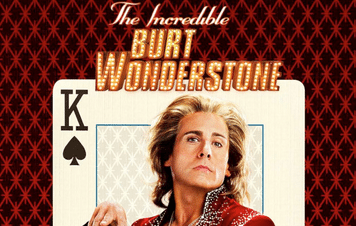 Who wants to see a magic trick?

Ta-da! Believe it or not there is more than one magic trick in The Incredible Burt Wonderstone that is similar to that one from The Dark Knight, one of them involving a power tool.

I grew up watching magic and was fascinated by it, and I still am to a lesser degree. I personally would still like to learn a few card tricks and every time I see a trick deck in the store I always contemplate buying it. As a kid I wasn’t familiar with David Copperfield, we were a Lance Burton household and every time he had a special on TV we would all watch it as a family. That was the heyday of magic. Then in the late 90’s there was a series of specials that revealed to you how all of magic’s greatest secrets were revealed. After that the magic was dead, so to speak.  Alan Arkin says in the movie “magic is the ability to make people believe in the improbable,” and I believe that statement to be true. A good magician will leave you wondering how it’s done with even the simplest of tricks.

In the early 2000’s we were introduced to the new “street performer” kind of magic. These performers still did the classic parlor tricks, but they introduced us to acts like levitating on the street in broad daylight and staying in a glass box for god knows how long. I never really adopted this new breed of magic and I feel, just like the movie unabashedly does, it’s not magic. This is actually the main source of tension in the movie. Jim Carrey (allegedly) is the Criss Angel inspired character who literally cuts his way into the lives of the traditional magicians played by Steve Carell and Steve Buscemi. The characters of Steve and Steve are at a crossroads in their lives, as both colleagues and friends, they’ve grown stale and are just caricatures of their former selves. Jim Carrey comes along and is that spark that both drives them away from one another, and ultimately brings them back together.

The last time Hollywood had a love affair with magicians we were given Nolan’s magnificent The Prestige and the not so astounding, but still solid, The Illusionist. It seems the magic love comes full circle this year with The Incredible Burt Wonderstone and Now You See Me later in the year. Now You See Me appears to be putting a little Ocean’s 11 twist on things and Burt Wonderstone is just a simple new guy comes in and the old guys have to reinvent themselves to stay relevant story. This isn’t to stay Burt Wonderstone is boring or anything like that, it just follows a formula. Jim Carrey is refreshing as the arrogant young, but not so young, street performer, unfortunately Carell falls flat in another one of his weird attempts to create a unique character. I much prefer him in movies like Dan in Real Life and Crazy Stupid Love where he plays it as a real person and I think he is dangerously close to becoming the next Adam Sandler, and that isn’t necessarily a good thing.

Burt Wonderstone doesn’t pull any punches with its comedy. It’s not lough out loud funny by any means, a giggler is a more apt description, but what laughs it does provide are consistent throughout the movie. It’s becoming more and more common place for PG-13 movies to use their one use of the F-bomb, and Burt Wonderstone’s use is one of the funniest moments in the movie. Also, did I mention Olivia Wilde is in this?

Synopsis: Superstar magicians Burt Wonderstone (Steve Carell) and Anton Marvelton (Steve Buscemi) have ruled the Las Vegas strip for years, raking in millions with illusions as big as Burt’s growing ego.  But lately the duo’s greatest deception is their public friendship, while secretly they’ve grown to loathe each other. Facing cuttthroat competition from guerilla street magician Steve Gray (Jim Carrey), whose cult following surges with each outrageous stunt, event their show looks stale.  But there’s still a chance Burt and Anton can save the act – both onstage and off – if Burt can get back in touch with what made him love magic in the first place.