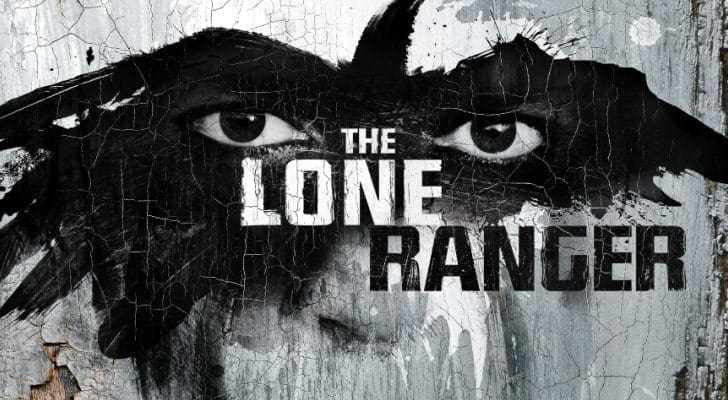 Albert Lamorisse’s The Red Balloon tells the tale of a boy and his balloon, but symbolizes dreams and the cruelty of those who destroy those dreams. It seems fitting, then, that The Lone Ranger’s establishing sequence begins with a single red balloon floating away from a 1930’s carnival in San Francisco.  Here, we meet a young boy with a black eye mask, munching on peanuts, and enjoying one of the many esoteric exhibits that inhabited the carnival circuits of long ago.  In a hall of taxidermied animals, the boy lays eyes on an exhibit featuring a sun-weathered, tired-eyed Native American, posed in a half-hearted threatening stance.  Fixated, the boy pauses to stare, still munching on his peanuts . . . until the Native American’s eyes move.  The boy jumps, spilling his snack.  As the Native American engages the young boy, the story begins, with a legendary recounting of a masked man seeking vengeance for his brother, and a side-kick seeking redemption for his mistakes.

Being vastly unfamiliar with the classic Lone Ranger, outside of “Hi-Yo Silver, Away!” I can’t speak for how fans of the original will enjoy this. In this rendering, John Reid, returns to his hometown, a freshly pronounced lawyer, to meet up with his family.  After a grand entrance, in which we meet up with Tonto and are introduced to one of the level bosses, Reid is pronounced a Texas Ranger by his brother.  Soon after, all the town Rangers ride out to capture said level boss.  Of course, danger strikes, and the Rangers, including Reid’s brother, are slaughtered.  Left for dead himself, Reid is reluctantly rescued by Tonto, who brings him back to health and persuades him to become the masked man, to not only avenge his brother, but to help Tonto stop the terrible men that destroyed his people by convincing Reid he is now a spirit-walker.

The Lone Ranger has potential.  With the big players from the Pirates of the Caribbean series teaming up once more (Gore Verbinski directing, Jerry Bruckheimer producing, Johnny Depp starring, Ted Elliott and Terry Rossio writing, and even Hans Zimmer composing), there was excitement that lightning could strike again.  But, this team clearly tries too hard to bring the magic of Pirates to the “cowboys and indians” genre, all the way down to re-hashing characters like Pintel and Ragetti. I personally felt the “pirate” spark die with At World’s End, and felt disappointed at how they tediously tried to use the same formula here.

One of the biggest problems for this film is it’s length.  The film spends a really long time meandering through a variety of concepts while only fleshing out a couple.  For instance,  Tonto’s speech about nature being out of balance, a respectable concept to be explored for sure, is instead illustrated by carnivorous, CGI-ed bunnies.  Are we suppose to laugh-and-dismiss or be horrified-and-respond by what man has done to nature?  We jump from serious to funny to absurd, back around through over-the-top action, and settle in on quiet poignant moments.  At times, it was incredibly difficult to tell what the movie wanted to inspire in the audience.  Entertainment?  Boredom?  I felt an unsettling mixture of both.

A particular scene that disturbed me most was when the Long Ranger and Tonto are following a horse into the desert.  Both men are sharing a single horse, and the Lone Ranger is holding a pink umbrella above the two to shield them from the sun.  They are bickering the whole time until the followed horse abruptly stops, looks around, then keels over dead.  The audience laughed!  So everything surrounding that particular moment the producers meant to be comedic?  Are we supposed to laugh at the dying horse?  If so, then yes, Tonto, nature IS out of balance.  I’m not even going to touch on the Native American portrayal in this film, because you could write thesis papers on the topic; there were times I felt vaguely uncomfortable.

The stunts, however, are phenomenal and prove to be the best bits of the film.  The climatic last 15 minutes, combined with the iconic “William Tell Overture”, will please any action film enthusiast.  Plus, the chemistry between Armie Hammer and Johnny Depp is a nice pairing, but it’s a little sad that their partnership was wasted in this script.

I’m not saying this is the worst film ever, but it you decide to see this movie, don’t expect the same joy and surprise success that the original Pirates accomplished.  Long and tedious at times, the movie does have moments of awesomeness due to amazing stunt work, smooth editing, and a thrilling score.  Like the boy in The Red Balloon, my expectations for this film may have popped, but there will always be more balloons to come. Synopsis: Native American warrior Tonto recounts the untold tales that transformed John Reid, a man of the law, into a legend of justice.