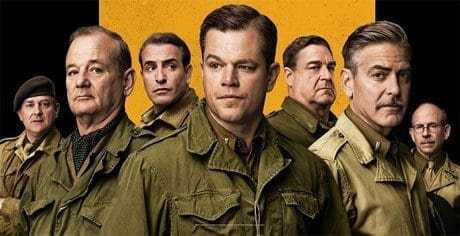 “Is a piece of art worth any man’s life?” This is the question posed by The Monuments Men and I had thought about that before going into the movie and I wasn’t sure how I felt about that. My mom may disown me for saying this, but I don’t think so. Don’t get me wrong, I understand the importance to art and they are our history, but when you compare to the atrocities that were happening in the world at that time I would say the preservation of art would be on the bottom of that list. What The Monuments Men attempts to do is prove that these priceless, and I do mean that, works of art are worth it. What it actually proves is something else entirely.

George Clooney and his band of merry men are then dispatched to Europe. Their original mission, it seems, is to guard historical landmarks and protect those priceless works of art. It seems that pretty early on the building portion of the mission is quashed when a rather short exchange between Clooney and some other gentleman ends with a “no.” Ok, just the art then. What I don’t get is that the team then splits up and heads to different parts of Nazi occupied territories. Matt Damon actually spends most of the movie screwing around in France. This could have been a feasible plot if there was some sense of urgency with their mission, they say more than one time that the war is at an end (spoiler alert: the war ends during the duration of the movie). Why don’t they just wait until the war is over and Europe is a little safer to go after the art? They originally set out to find an altar piece that was stolen, but it’s not mentioned again until they find it, but they’re also looking for a statue that one of their friends died trying to protect, but they don’t make this their driving force, there’s no simple endgame that makes me root for these guys.

I’m literally driving myself crazy the more I think about the premise of this movie. I understand it’s based on a true story, and I don’t know how close the movie follows the actual events, but take some artistic liberties here. If you want to argue about how movies like Pearl Harbor are historically inaccurate please stop reading this now, it’s a movie not a documentary. I would keep going, but there really is no point. The only thing that made this bearable is the misplaced humor. It’s a real shame this movie turned out like it did because there is a lot of good talent both in front and behind the camera. It’s a real missed opportunity in my opinion.

Swallow Review | A Mature Take on Mental Illness That Should...