Geek News Network
Home Topics Gaming The MTG Deck Lab: A Night Out with the Vampires 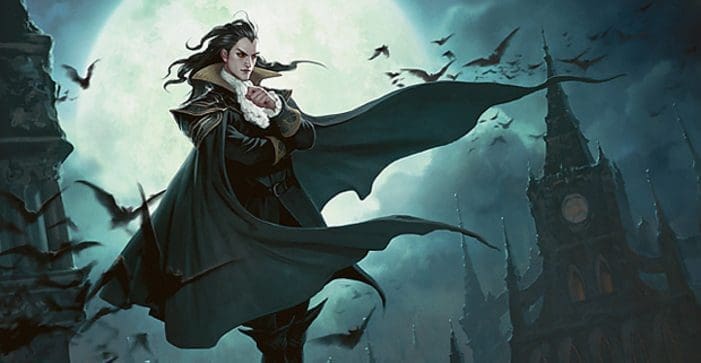 An era is coming to an end.  The gothic haunts of the Innistrad block are about to be replaced with the Elysian shores of Theros.  The dark reaches of Innistrad brought us a host of intrepid humans, like the [card]Silverblade Paladin[/card] and [card]Champion of the Parish[/card] that sought to hold back a night full monsters straight out of classic horror.  Several of the cards from this set achieved legendary status.  [card]Geist of Saint Traft[/card], [card]Cavern of Souls[/card], [card]Snapcaster Mage[/card], [card]Liliana of the Veil[/card], and [card]Huntmaster of the Fells[/card]/[card]Ravager of the Fells[/card] have all become classics.  It will be a bitter sweet moment as we watch these friends fade in the rearview mirror on September 27th, 2013.

With this in mind I figured it was time to take a few favorites for a swan song.  One area where Innistrad was particularly strong was vampires.  With great utility vampires like [card]Rakish Heir[/card], and [card]Stromkirk Captain[/card] to bolster the tribe, Innistrad represents a golden age for the vampire tribal deck.  It features three of the greatest vampires of all time, the [card]Bloodline Keeper[/card]/[card]Lord of Lineage[/card], the [card]Falkenrath Aristocrat[/card] and the soaring seductress [card]Olivia Voldaren[/card].  Since it has been confirmed that there are no vampires in Theros, I decided to take the blood suckers for a final night on the town.

Over time I have assembled a pretty solid assortment of vampires.  I never picked up the [card]Falkenrath Aristocrat[/card], but had the rest of my top three as a start.  To fill out the deck, I pulled vampires from throughout standard.  Fortunate for me, M13 gave us back the deadly [card]Vampire Nighthawk[/card] from the Zendicar block. (One of my all time favorite 3 drops.  What can’t that guy do!).  The Ravnica block also gave us a devastating addition with [card]Blood Baron of Vizkopa[/card].  So with a little cobbling here’s the deck I came up with.

*1 Mark of the Vampire

I chose to play it at a Tuesday Night Magic hosted at a Pop Culture Paradise in Tempe.  I figured it would be a more casual setting than Friday Night Magic and give me a chance to air to the vampires a bit.  Little did I know that they were running a mini-tournament with a full set of Gatecrash as the prize.  Me and my vampires were a little like the Oddfellows Walking Club turning up at the Boston Marathon.  Everyone had their A-Decks in play.  If you follow the most popular pro decks of the last 12 months, you would have seen them all.  Delvers flipped, Sphinx’s were constantly having revelations, [card]Restoration Angel[/card]s popped in and out like paramedics at a geriatric disco, and [card]Thragtusk[/card] kept showing up everywhere like Elvis on the Vegas Strip..  In short it was a hoot.  The vampires never really stood a chance at taking home the bacon, but did surprisingly well.  The tournament went six matches, and the vampiric vagabonds split in almost every match they played.  They also lost most, but rarely did we really get blown out.  The fact is, if we got far enough to drop a [card]Bloodline Keeper[/card], or [card]Olivia Voldaren[/card] we usually won.  [card]Blood Baron of Vizkopa[/card] proved to be a brutal card and we never lost a game when he was on the table.  Since he’s not rotating, I may have to see if we can find a way to abuse him in the future.  The propensity of [card]Stromkirk Captain[/card] to turn everyone into first strikers was a real problem for opponents. Even our lowly common, [card]Shadow Alley Denizen[/card], with her ability to bestow intimidate, functioned like a champ in this deck.  Given the competition, the vampires proved surprisingly effective.  But above all, they were fun.  It will be with a heavy heart that I’ll pack them back into their coffins.

Bon Voyage our fearsome fanged friends…it’s been a pleasure.  We’ll see you in Modern!