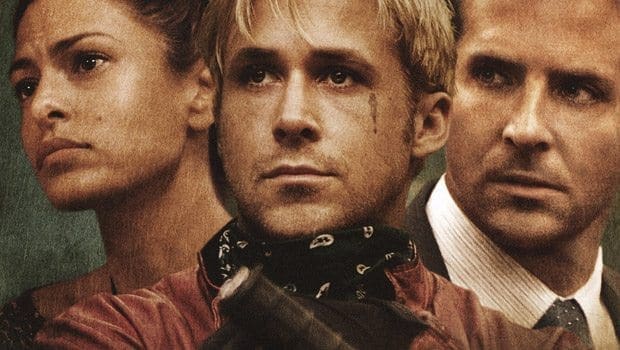 What effect does your father’s influence have on your life? That is the question that director Derek Cianfrance tries to explore in his follow to 2010’s Blue Valentine, The Place Beyond the Pines. Pines tells the story of Handsome Luke, a carnival stunt motorcycle rider, who, while visiting a town, learns that he has a young son and decides to stay and help raise him. He finds a job at a mechanic shop, but when the money dries up he soon turns to bank robbery. The movie tries to show what kind of effect a father can have on his son and is actually broken up into three distinct narratives.

This is the part that most of the trailers focus on. It follows Ryan Gosling as he goes from lowly motorcycle stunt man to brazen bank robber. He teams up with his boss from the mechanic shop, who used to rob banks too. His method relies heavily on his skill as a motorcycle rider. He goes into the bank using his gear as a disguise and leaves on the motorcycle he’d left running just outside the door. After the first robbery the camera follows him in a single shot white knuckle ride down city streets and open highway as he races at excessive speeds toward the white box truck that is waiting to hide him. Things go awry when he decides he wants to rob two banks in one day and because of some unforeseen circumstance he needs a new motorcycle and is subsequently “dealt with” by a rookie cop played by Bradley Cooper. I was under the impression that this was going to be the entire movie and if that were the case it would have been a much better picture. Gosling is awesome as his typical shy, tough guy self and the robbery scenes are as white knuckle and pulse pounding as you can get.

In the second part Bradley Cooper is trying to deal with the ramifications of what happened at the end of part 1. He has a young son, the same age as Gosling’s, and wife that have now become distant to him. This is a weird segment because there is a subplot with Ray Liotta that deals with police corruption. This is how Cooper shoots to his eventual position as D.A., but it was completely unnecessary. Had they excised the corruption sub plot and replaced it with a line of dialog it wouldn’t have drug the movie to such a grinding halt.

The third part takes place 15 years later after both of the kids are grown and Cooper is now D.A. Cooper is now divorced from his wife and his son has strayed toward the criminal side of life and has befriended Gosling’s son, unbeknownst of their past’s together. When they do eventually find out, there is a final confrontation that forces everyone to face what everything means to them. Had it just been part 1 and part 3 then it would have been a more cohesive movie.

Gosling is awesome as always and unfortunately exits the movie far too early. Cooper is kind of boring and, even though I don’t like her, Eva Mendes is one of the best parts of the movie. She looks and acts like she has been run through the wringer of life. Cianfrance, while the heart and ambition are there, tries to cram too many ideas into this movie which turns this little indie that could into a two and a half hour snooze fest that stopped being enjoyable after the first forty five minutes.

Synopsis: A motorcycle stunt rider turns to robbing banks as a way to provide for his lover and their newborn child, a decision that puts him on a collision course with an ambitious rookie cop navigating a department ruled by a corrupt detective.