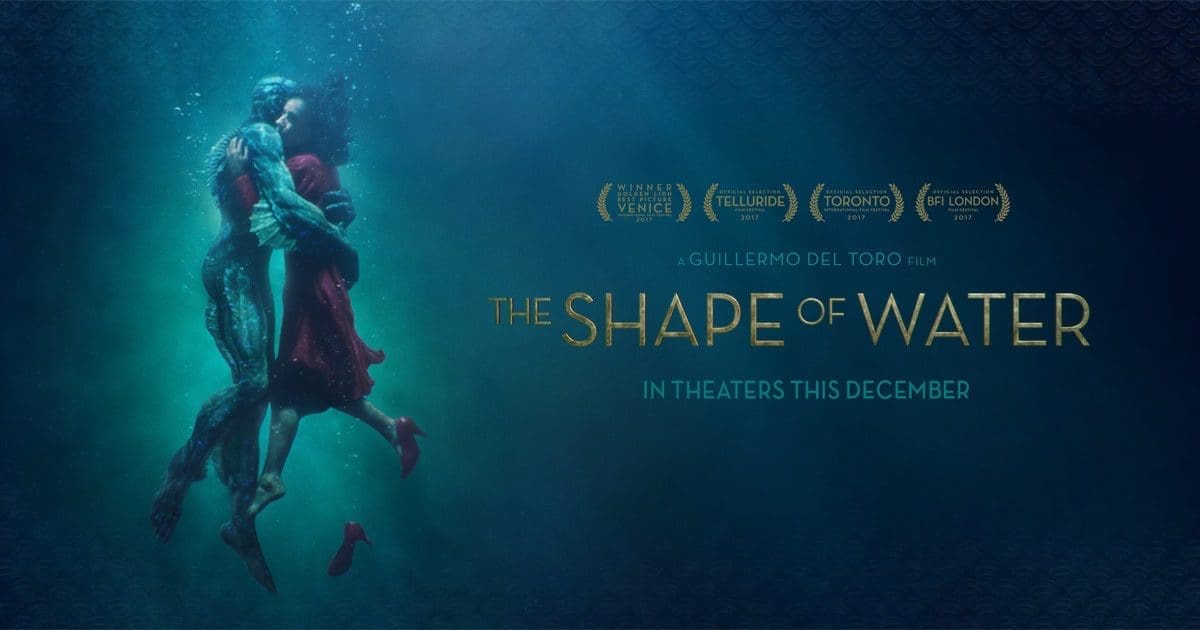 Guillermo del Toro’s The Shape of Water is a love story that’s a long time coming. It’s set to the backdrop of 1960s Cold War between an Amazonian fish man locked in a secret Baltimore military lab and the mute woman who cleans the facility. The Shape of Water’s origin began over a dinner conversation years ago and stars del Toro’s longtime collaborator Doug Jones (Pan’s Labyrinth, Hellboy II, Crimson Peak) as an amphibious fish-like man very reminiscent of the 1950s and 60s monster films. As the film opens, “Amphibian Man” as he’s listed in the cast list, is captured in the Amazon by a military group led by Colonel Richard Strickland (Michael Shannon) and shipped off to be studied outside of Washington D.C.

Elisa Esposito (Sally Hawkins) is a woman with a ritual. She wakes, boils eggs, times her vigorous masturbation sessions, cooks for her best friend, and takes the bus to the secret government lab (because you can’t have a movie set in 1965 without a secret government lab). She’s a mute who understands everything being said to her, signs responses to either her best friend, Giles (Richard Jenkins), or Zelda (Octavia Fuller), her coworker and confidante of 15 years, and embraces not only her own self-worth but that of those around her. Jenkins, who is wonderful as not only her gay best friend and neighbor but also the film’s narrator, is an out of work advertising artist who’s quickly realizing photographic ads are supplanting hand-drawn images, while Spencer teeters between the acquiescent housewife and righteously proud government employee in a position steeped in remarks of race smack dab in the early days of the civil rights movement.

Speaking of those government goons, del Toro cast Michael Shannon as Strickland who, even though he hates being defined as such, plays the villain so well, including in recent memories General Zod in the Superman franchise. Del Toro’s lighting techniques he uses as Shannon moves about scenes, hiding in cars, watching others, or sitting in his garage obsessing over his failure, leaves the audience struck between a true villainy and headstrong antihero trying to win the cold war and be all that he can be to keep those Russkies at bay. His foil, Dr. Bob “aka Dimitri” Hoffstetler (Michael Stuhlbarg), is played quite a bit subtler as a sleeper Russian scientist placed in the lab to steal the amphibian man away for the KGB. Both Shannon and Stuhlbarg are just as complex characters as del Toro weaves several threads of motivation throughout the course of the narrative.

While the antagonists are well-written, the complexity of the main protagonists drives the film. Hawkins relationship to Jenkins as caregiver, best-friend, and confidante is tested as she discovers someone who is much more like herself – someone who tests the bounds of platonic friendship and how far someone will go for loyalty. Similarly, her relationship with Spencer’s Zelda is defined by her reactions to Hawkin’s uncharacteristically breaking the law. In a world of racism, Spencer’s subtle struggle for her own racial identity mirrors Hawkin’s sudden actualization into the second and through the third act of this film. These three characters relationship to Stuhlbarg as a multi-layered, unassuming supposed antagonist lends itself to a satisfaction for the characterization throughout the last portion of this film – to put it mildly, vague as to not spoil much of the narrative for the reader. As the film advances to the final moments, there’s only one way it can end. This isn’t a film based on twists and turns, and it ends satisfyingly exactly how one would assume.

As a die-hard GDT fan, The Shape of Water fell short of the sheer awesomeness of Pan’s Labyrinth but will be more critically acclaimed that Crimson Peak (which I friggin’ adored and reviewed for Geeks New Network here ). While Crimson Peak was misrepresented in the media, The Shape of Water is exactly what you get; it’s a romantic magical realism film about love, war, and romanticism defined by a search for identity. It’s pacing is smooth throughout the film without any contrived bits sometimes found in quirky art films. As a period piece, it’s spot on in terms of authenticity to not only the setting but also the feel of the film. Sets by production designer Paul D. Austerberry had a layered texture to them and a coloring that’s typical of del Toro films. The film is heavy on blues — as one can see in the production poster of Jones and Hawkins in the water. The various blue tone shifts slightly through the film from a bright blue of Jones’s exterior in some scenes to a discussion of teal in terms of status. The only other colors deliberately used are reds when Hawkins character actualizes and discovers her passionate purpose part way through the film and that 1960s orangey yellow that surrounds Shannon’s suburbian home life.

About The Shape of Water

Synopsis: A mute cleaning lady comes across an amphibian man chained in a large tank in a secret government lab in 1965’s Cold War Baltimore. Over the course of several days, their bond grows until she must make rash decisions to save not only his life but also discover her own. The cast is rounded out by her gay best friend, black co-worker, secret sleeper Russian scientist and the Colonel whose main purpose is to stop them all.