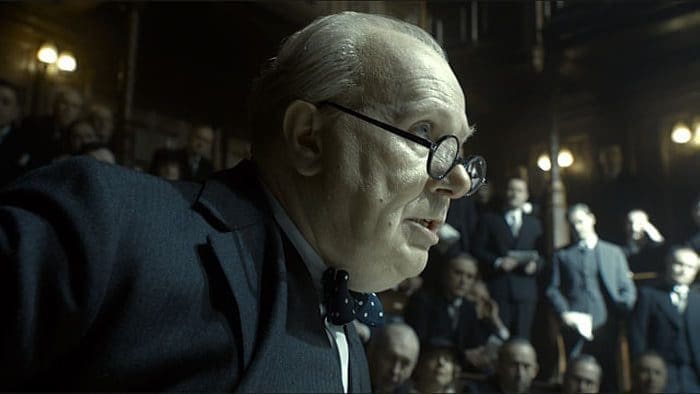 In 2017 we’ve seen a resurgence in the World War II genre, with powerhouses such as Dunkirk, The Man with the Iron Heart, and now Darkest Hour. While other films this year have taken a more action-packed route, Darkest Hour focuses on the behind the scenes politics of England during the early days of the war. With Western Europe rocked by the growing invasion of the Third Reich, Great Britain faces a tumultuous Parliament with deep divisions between the party lines. Darkest Hour takes the audience into those few days as then Prime Minister Neville Chamberlain (Ronald Pickup) is ousted and replaced by Winston Churchill (Gary Oldman) in a stunning upset to everyone, including King George VI (Ben Mendelsohn).

Darkest Hour peels back the layers of the historical icon to dive into Churchill’s humanity as he struggles with the weight of his decisions during his first days as Prime Minister. Gary Oldman leads the cast in a stunning performance that is engaging and suspenseful. The film is captivating with gripping scenes, smart dialogue and beautiful imagery but it still manages to slice through the thickness of war with humor and heart. Where the film falls short is in its abrupt ending, with closing titles that leave you wanting more.

The film opens on May 10th, 1940, as British Parliament seeks the resignation of Prime Minister Chamberlain after the fall of Norway to the Nazi Regime. Chamberlain steps down with a vote of confidence for Viscount Halifax (Stephen Dillane) to take up the role. But in a twist of fate, the Parliament selects Winston Churchill instead, a political wild card to both parties and a staunch opposition to Halifax and Chamberlain. Winston is reluctantly appointed by King George VI and immediately moves into 10 Downing Street. Churchill appoints Halifax and Chamberlain to his war cabinet in an attempt to bridge party lines, but the two men have serious doubts of his abilities and soon conspire to have him removed by a show of no confidence from Parliament. But their schemes are least of Churchill’s concerns as the Nazi army closes in on the last remaining British troops in Dunkirk and the threat of a Nazi invasion on British soil is imminent. Churchill must decide whether to surrender to Hitler before they hit English ground, or stand and fight against impossible odds.

The transformation of Gary Oldman into Churchill is nothing short of breathtaking as the make up effects render him nearly unrecognizable. Along with his bombastic performance as the iconic leader, Oldman is cemented as the character and it’s easy to for the audience to lose themselves in his portrayal. Supporting cast such as Lily James as his personal typist and Kristen Scott Thomas as Clementine Churchill add an endearing element to the story but with such a heavyweight behind a magnetic leader, their performances tend to fade into the scenery.

The politics of the film play out well and as the story progresses so do the stakes at hand. The rapid decline of Churchill as the weight of his country presses down on him is shown in very subtle but effective ways. At one point he is grasping at straws and thus sends out the order for civilian boats to lend aid in the rescue of troops at Dunkirk. This film is a complimentary piece to Nolan’s 2017 action drama, as it shows the other side of the story and the events that lead up to that perilous moment. The film crests as Winston is visited by King George VI who encourages him to fight on rather than enter negotiations and the climax of the film is Winston’s iconic speech to Parliament rallying their spirits once more.

But while the film has a fantastic build-up to this momentous occasion, the ending feels rushed and abrupt, which leaves the audience with an unsatisfied resolution. While his call to arms is the pinnacle of the film, with no visualization of a resolution afterward, it feels as though the director, Joe Wright, scrambled to find an ending with little success.

Darkest Hour overall is a fitting tribute to the man behind the legend and portrays the more vulnerable side to such a powerful leader. While the tension builds throughout the film, there are humorous and tender moments sprinkled throughout that show Churchill’s faith in mankind. Yet behind his small bouts of warmth and kindness, there is a sadness and regret that steers his decisions and ultimately he must face his own past defeats to rise up to lead the nation to victory.

Synopsis: The newly-appointed British Prime Minister Winston Churchill, must face a harrowing battle during the early stages of WWII. Within days of his appointment, Churchill realizes the reality of the Nazi invasion and must choose whether to continue to fight or enter into negotiations for surrender to Hitler. In the darkest hour of Churchill’s career, the fate of all Western Europe lands squarely on his shoulders.