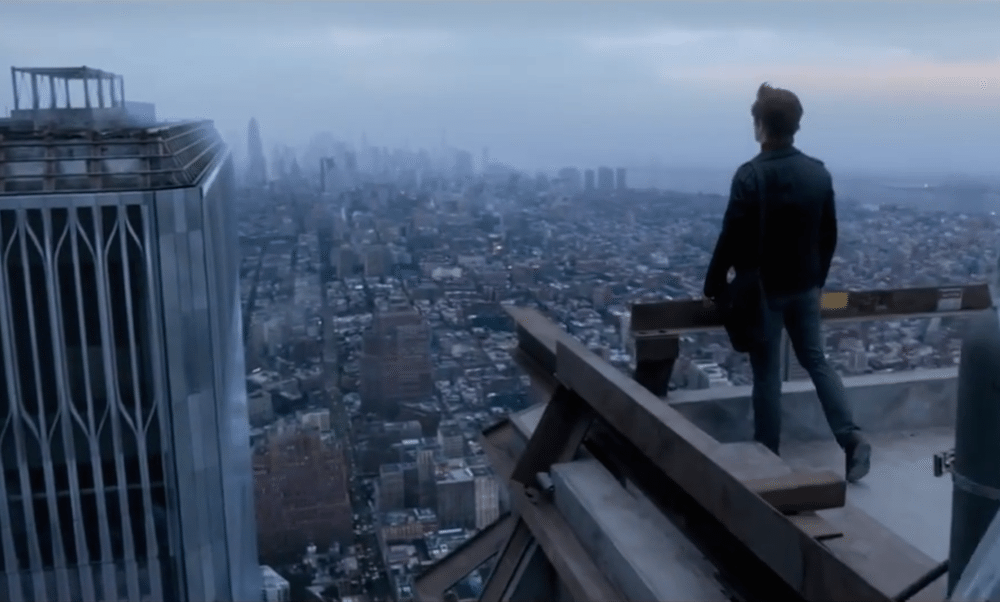 The art of the daring and impossible is a beautiful thing.  We go about our daily lives witnessing outrageous, silly videos online or perhaps a clever street performer on a night out, but a true daredevil extraordinaire can stop our feet and our hearts.  Such is the dream of Philippe Petit, a man consumed with the dream of placing his wire atop any place that will grab attention.  A dream that inspired many others and filled our souls with imagination.  Of course the dreams Philippe is determined to make come true require risk and a bit of lawbreaking.  Something that could only have been done in 1974.

In The Walk, directed by Robert Zemeckis, Philippe (Joseph Gordon-Levitt) is a street performer in Paris trying to make his own way with his art of balance and tightrope walking.  A passion he’s acquired ever since he was young.  His inspiration is the circus, which is where he meets his mentor Papa Rudy (Ben Kingsley), a patriarch of tightrope walkers.  Although hesitant to divulge his secrets, Papa Rudy confides in Philippe after being charmed by his enthusiasm and tenacity.  In time he also meets Annie (Charlotte Le Bon), a fellow street performer and musician.  They strike a harmonious relationship that only increases their passion for their work.  By chance Philippe stumbles upon an article in a magazine describing the not yet finished World Trade Center and its two 110-story towers in New York City.  His mind can now think of nothing else but to be suspended by a metal cable perched between those two buildings.  So he sets out on an impossible adventure to sneak into the towers and, with the help of a slightly reluctant team, make that dream a reality.

Much of the movie is narrated by Philippe as he explains in past tense how he devised and refined his plan.  He also is shown practicing.  Tightrope walking a few feet off the ground is one thing, but a highwire walk hundreds or thousands of feet up is another story.  Luckily there were a few very tall, parallel structures in Paris to work with.  Of course every plan requires adjustment.   Eventually he does make his way to the U.S. and now must recruit more accomplices that can carry instructions and keep this enterprise a secret.  He finds a few such men, including a hardware salesman named JP (James Badge Dale), who supplies wired radios that can’t be intercepted by police, and a businessman inside the tower named Barry (Steve Valentine), who is familiar with Philippe’s work and all too eager to get involved.  If all this preparation isn’t complicated enough, they still have to figure out a time when the towers are unoccupied and sneak up to both roofs with all their equipment.  Once there they must suspend a thick metal cable between the two without being noticed and make sure it’s properly fastened and capable of supporting a human being.

I wasn’t sure if Joseph Gordon-Levitt’s French accent would be a distraction and as the story unfolded it became an afterthought.  The humor and stage presence of Philippe compliments Levitt’s acting and his quick wit elevates the character beyond a mere impersonation.  I almost wouldn’t believe an insane, animated individual like this existed in real life, but seeing as Levitt had access to Philippe on set it can easily be assumed he wasn’t too far off.  Philippe is a performer and loves to entertain an audience so he makes sure to give them a show no matter what the circumstance.

The buildup to the execution of Philippe’s plan is pure excitement.  Every little detail has to fall into place.  Any interruption delays the walk and they need the cover of night to hide their illegal activity.  While the story seems to lack serious, emotional depth, the heart and determination of Philippe comes through loud and clear once he does eventually step out into the void.  Nothing but confidence and skill can save him now.  He is 110 stories above the world without a safety net.

Robert Zemeckis is known these days for his technological prowess, utilizing the most advanced CGI to bring his films to life.  His movie Flight began with an amazing plane crash that left your heart pounding.  The Walk brings that heart-pounding moment near the end of the film and stretches it out a good 20 minutes.  Even though you know it’s CGI and these actors aren’t in any real danger, you still lean back a little when the camera peers off the edge of that roof.  Every footstep takes your breathe away.  The wind and the clouds reminding you of the silent beauty separating you from the growing crowds below.  The slight noise of metal adjusting itself as though the cable could give way at any time.  There aren’t any assurances in that moment and yet the confidence that Philippe exudes is remarkable.

The Walk is a beautiful love letter to New York City and the World Trade Center.  A Frenchman gave a gift to that city and brought those buildings to life by way of his personal dream.  Joseph Gordon-Levitt is very entertaining in this film and carries the movie with his mannerisms and charisma.  Charlotte Le Bon does a great job as well portraying the woman providing the support Philippe needs when he seems to lose control of his own ambition.  James Badge Dale is a real highlight as the New Yorker who can talk his way out of anything.  Steve Valentine also adds a great energy to his scenes.  Ben Kingsley can do no wrong and is possibly the strongest character onscreen.

My only issue is the narrative feels superficial.  The characters are fun to watch, but I never felt like this is real, even though this is an actual event that occurred.  All that is moot once the main attraction takes place and the wonder washes over you.  I suppose if you want to compliment the experience of seeing such a visually, immersive film, you should watch the documentary Man on Wire.  Any person with a dream that can offer positive inspiration to the world should be encouraged.  Granted they may have to break some rules, but that’s the price of rising above the comfort of complacency and self-assurance.  The Walk shows us there is nothing out of reach and we just need the confidence to step out onto that ledge.

Synopsis: In 1974, high-wire artist Philippe Petit recruits a team of people to help him realize his dream: to walk the the immense void between the World Trade Center towers.

Writers: Robert Zemeckis & Christopher Browne, based on they book “To Reach the Clouds” by Philippe Petit