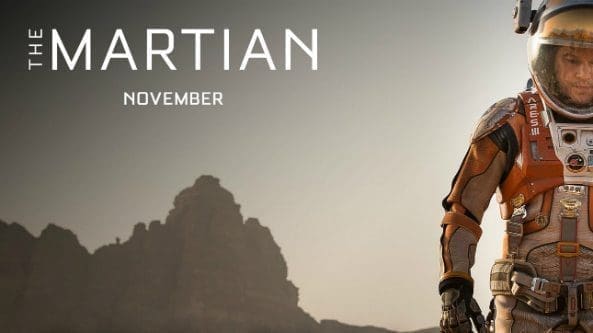 If there are two words to describe each and every time that you see Matt Damon in a film those words would have to be “unbridled charisma”. Although many actors have very likable personalities, only a slight few garner the ability to draw in the audience in nearly every role that they play. Even when Matt Damon plays a psycho murderer in The Talented Mr. Ripley or an asshole detective in The Departed, his presence onscreen is still very affable. Due to this appeal, Damon has been a mainstay in Hollywood for over twenty years now and has gained the ability to star in countless big-budget blockbusters. One such blockbuster is Ridley Scott’s new sci-fi book adaptation entitled The Martian.

Damon plays Mark Watney, a botanist who is part of a team of NASA astronauts that are on a mission to discover more about the surface of Mars. While searching for soil samples a brutal storm breaks out, Mark is hit with debris and presumed dead, and his team is forced to leave him behind as they blast off from the planet. Mark finds himself marooned and with very little supplies so he does the best with what he has in order to try and contact Earth and hope that he can survive until help arrives.

Ridley Scott used to be one of my favorite directors but his last couple of films have been very lackluster in my opinion. Luckily The Martian breaks the losing streak and Ridley Scott bounces back in a very big way. The acting, editing, and cinematography are beyond brilliant. Scott is able to craft a film that not only has the audience feeling complete empathy for Mark’s situation, but he is able to break up the serious moments with light sparks of humor throughout. This not only keeps the mood of the film in a very positive light but it also keeps the audience engaged without feeling bored.

A portion of that is accomplished with the acting. Matt Damon does a phenomenal job at playing a man at war with himself. He knows what he has to do but he doesn’t know if he can actually accomplish it. He’s snarky, arrogant, and extremely funny which gives his character a great three-dimensional presence and keeps you enthralled with each new event that occurs. Although Damon has the majority of the screen time, scenes involving Jessica Chastain’s character Melissa Lewis are just as engaging. She is the leader of their NASA team and she is able to give a strong gravity to her character while showing a great amount of compassion and humility at the same time.

In addition to the acting, the cinematography and editing are beyond reproach. You actually believe that Matt Damon is trapped on the Mars due to the CGI being completely seamless. From the space ships to the planet itself, the fantastic use of CGI made me believe at times that this film wasn’t actually a work of fiction. On top of that, the pacing and brilliant editing made the one-hundred and forty one minutes simply fly by. I was glued to the screen from start to finish and never once did I feel uninterested in what was going on. To put it plainly, The Martian is a fantastic tale of survival and a film that should not be missed.

Synopsis: A NASA botanist gets marooned on Mars and tries to survive while waiting for rescue.