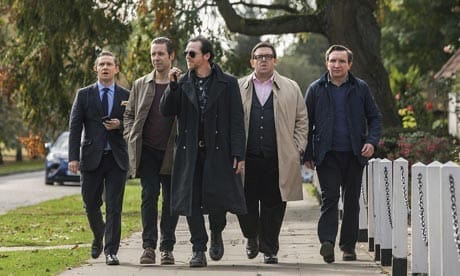 Let me bring you back to 2004. That’s right, almost ten years ago. I was headed over to my friend’s house for some tofu tacos and a little movie watching. The movie on that night’s docket was a little British movie by the name of Shaun of the Dead. I had never heard of it before and was a little leery because I had never seen a movie from across the pond. He popped in the bootleg DVD (the movie hadn’t been released here in the states yet) and what followed was 100 minutes of pure awesomeness. Shaun of the Dead is important to me for a few reasons. One of the most important is that it introduced me to British cinema. Sure, I had been recommended Snatch by Scott Derrickson (name drop) earlier in the year, but I didn’t really have the guts to check it out. Another is that it introduced me to Edgar Wright and Simon Pegg, whose careers I’ve since followed with excitement.  A few years later Hot Fuzz was released, and it’s no secret that I’m no fan of that, but it’s still a solid movie with plenty of laughs. This year marks the release of the third chapter in the “Cornetto Trilogy” The World’s End.

The World’s End follows five childhood friends as they try to finish a legendary pub crawl in their hometown, only to find that strange happenings are afoot. I found that The World’s End was a perfect allegory for the “trilogy” as a whole, not only with the filmmaking and the writing, but with the overall story. We know through a prologue narrated by Pegg that the five were childhood friends and since the fateful night they have grown apart. Most of them have grown up, gotten married, had kids, have successful careers, all except Pegg’s character who is stuck in the past, he even wears the same clothes from twenty years ago when they meet up. I identified with every one of the five guys, but mostly with Pegg’s, which scares me to no end. He was so caught up in recapturing that moment that he forgot to savor the memory and make new ones, which ultimately ends up driving him further into personal darkness.

Edgar Wright has proven himself to be a filmmaker that can make you laugh, surprise you, and in the case of The World’s End, bring a tear to your eye. This time around Pegg and Wright decided to take on some more serious issues like suicide, alcoholism, and the cost of growing up. The only real complaint I had with the movie was that those issues were kind of glossed over with the sci-fi element of the movie. Personally, I think the movie would have been perfect if they had chosen to focus on one element over the other and to go with the theme of the movie I would have ditched the sci-fi.

In the end, The World’s End is a movie that delivers on so many different levels that it’s hard to knit pick the few hiccups that it does suffer from. It’s a perfect end to a trilogy that, like the friends in the movie, started off as a bunch of stupid kids on a silly drinking quest to growing up and finding out what’s really important.

Synopsis: Five friends who reunite in an attempt to top their epic pub crawl from 20 years earlier unwittingly become humankind’s only hope for survival.

HITRECORD On TV re: The Number One

Sorry to Bother You | Movie Review