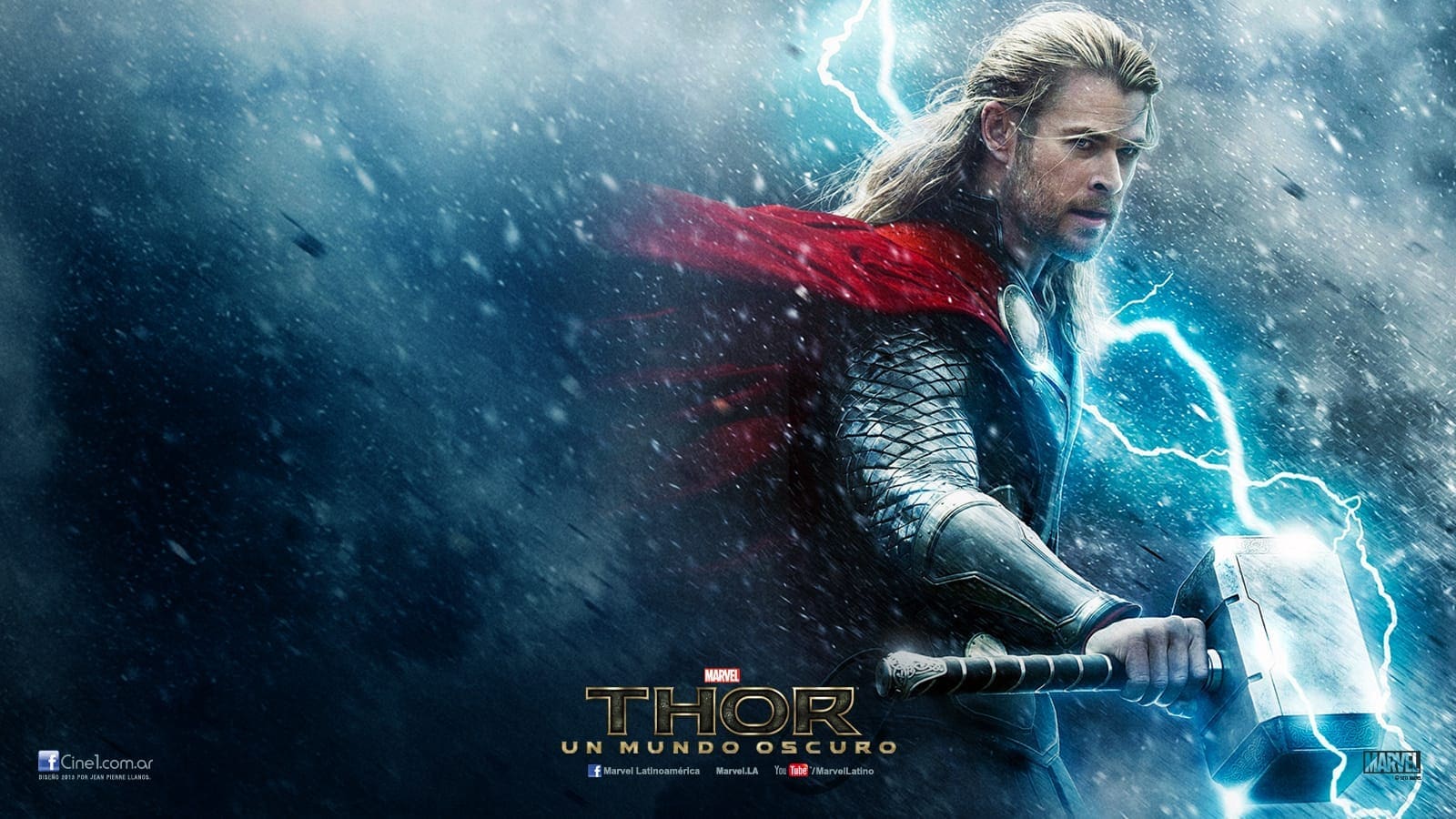 Before the movie even began, we were treated to some exciting previews, my favorite being for Captain America: The Winter Soldier, in which we see a tease of Cap’s sidekick Sam Wilson, aka The Falcon.  Just that was enough to get me pumped up for the movie, and I was not disappointed in the least.

The latest installment in the Marvel Universe series returns its focus to Thor, demigod and next in line for the throne of Asgard.  The movie opens with a back story telling of the Dark Elves and the universe as it was before Odin’s father lead the Asgardian forces to victory over the army of Dark Elves and their leader, Malekith (Christopher Eccleston) who is about to use a weapon of “Aether” to return the universe to darkness.  The Asgardian’s rout their foes and believe the Dark Elves to be slain, however Malekith has escaped to lick his wounds and return.  The Aether weapon is too powerful to be destroyed, so it is hidden away where it is never to be found again.

So, of course we know the Dark Elves will find the Aether weapon and use it to try to plunge the universe into darkness again.

Thor is played once more by Chris Hemsworth, his bulging biceps and his rock hard abs.  Natalie Portman returns as Jane Foster, Anthony Hopkins as Odin, and, lest there be fan girl riots, Tom Hiddleston is back as Loki.  The performances are done quite well and the actors have good chemistry and interplay between them.

The movie moves along very well and has enough gravitas to ensure that there is a palpable feeling of danger going on throughout.  There are also many moments that make the viewer laugh.  (Though there was a big missed opportunity with having a cameo from Chris O’Dowd from The IT Crowd, and a malfunctioning piece of hardware.)  Though the film runs 2 hours long, it is a very tightly told tale.  There were not moments which dragged and everything helped to move the plot along and added to the building story.

One of the things I appreciated about this sequel is an expansion of a line from the first movie where Thor says of science and magic, that he comes from a world were they are one and the same.  In this film we see spears that shoot energy bolts, swords with laser edges, ships which look like old Norse boats, but fly and are equipped with energy weapons.  Everywhere there is a very well done, and pretty, mix of science and magic.

The effects are very well done and the cinematography of the scenes set in Asgard are really beautiful to see.  The funeral scene after the Dark Elves surprise attack on Asgard is a breathtaking spectacle of light.  Heimdall’s control room is finely wrought with detail, and is animated intricately.  The soundtrack, composed by Brian Tyler, is another incredibly well done layer, adding majesty and mood to the film, but not overpowering the actors.

Of course we know that at the end Thor will emerge triumphant and that the Dark Elves will be vanquished, at least for the next 5000 years.  (Seriously, between this movie and The Fifth Element, what is it with 5000 year cycles of galactic badness coming to destroy the universe starting on Earth?)  The film wraps up well, but does leave a few cliffhangers to be answered in the future.  There are a few twists, some of which I saw coming, a couple which surprised me.

I thoroughly enjoyed this film.  Was it perfect?  No.  Are there some plot holes?  Sure.  That said, Thor 2: Electric Boogaloo, sorry, The Dark World, kept me engaged and interested from the beginning, it gave me characters that I gave a damn about and *Spoiler Alert* it gave me a naked, though pixelated, Stellan Skarsgard, running around Stonehenge, attempting to avid being arrested.  I am looking forward to going back to see it again and look for the Easter Eggs that Marvel Studios loves to put into these films.

About Thor: The Dark World

Synopsis: Faced with an enemy that even Odin and Asgard cannot withstand, Thor must embark on his most perilous and personal journey yet, one that will reunite him with Jane Foster and force him to sacrifice everything to save us all.

Rated: PG-13 for sequences of intense sci-fi action and violence, and some suggestive content

“Much Ado About Nothing” Movie Review