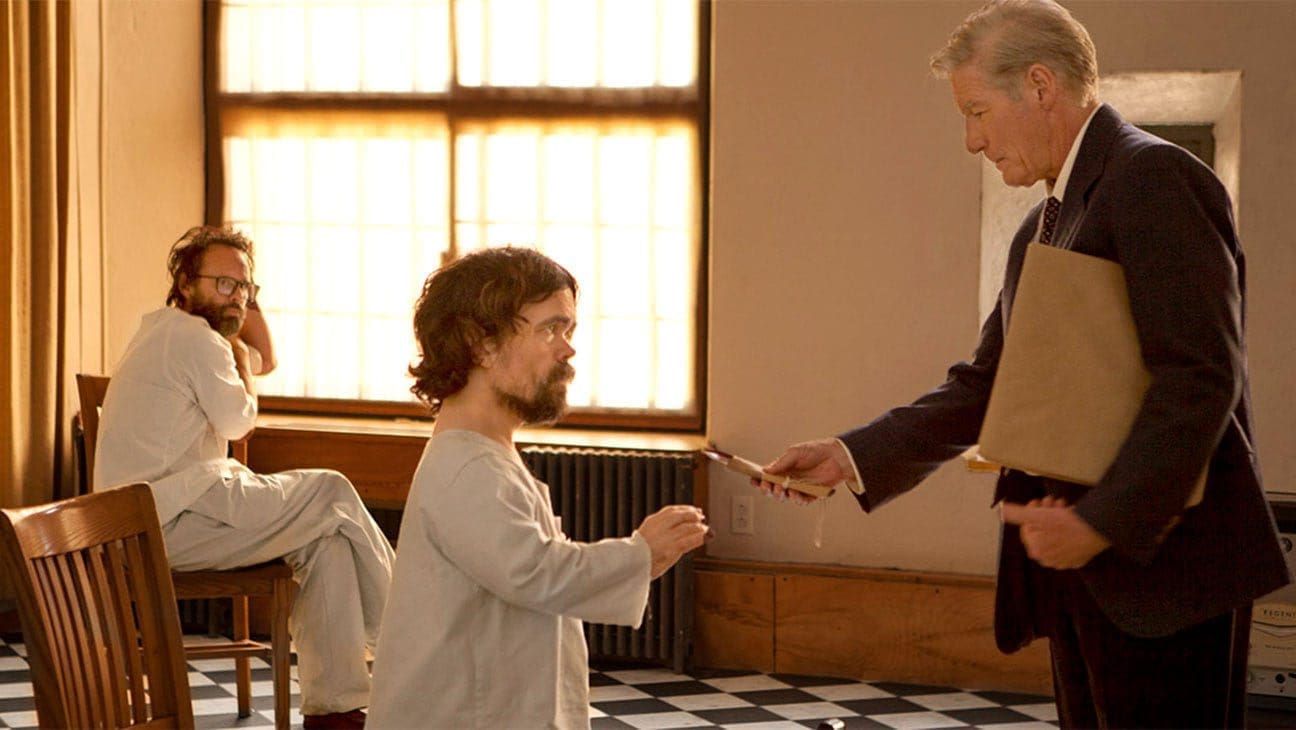 Paranoid Schizophrenia has always been as fascinating as it has been terrifying.  Our understanding of this mysterious illness has come a long way since the dark days of institutionalism.  A step forward in the field is depicted in Three Christs, which is an adaptation of the book “The Three Christs of Ypsilanti” by psychologist Milton Rokeach.  In his book, Dr. Rokeach discusses his case study with three patients in the early 1960s.  Rokeach, who was appalled by the inhumane and harmful practices of the time, believed a new approach was needed.

In the film adaptation Dr. Rokeach is renamed Dr. Alan Stone (Richard Gere).  Dr. Stone wishes to pursue a more hands-on approach to study Schizophrenia, void of institutionalized cruelty.  Stone finds three schizophrenic men: Joseph, Leon, and Clyde (Peter Dinklage, Walter Goggins, and Bradley Whitford).  All three men believe they are Jesus Christ.  Stone brings these men together and encourages them to interact as a support group in hopes they may overcome their delusion.  While the three men remain convinced each is the one true Christ, the personal approach still proves to benefit the patients.  All the while, the progress he is making is under threat from the institution, which is skeptical of Stone’s methods and eager to resort back to electroshock when things get out of hand.

In reality, much of Dr. Rokeach’s experiment was ethically dubious.  It was manipulative and many of his methods involved being dishonest to his patients.  He was criticized for this and ultimately came to agree with these criticisms.  Yet, as an early voice against the evils of institutionalism, Rokeach was still revolutionary, making him a morally complicated figure.  This would make the perfect subject for a compelling film… if the filmmakers had cared to genuinely explore it.

Sadly, director Jon Avnet fails miserably in this adaptation.  Not only is Three Christs a deeply untruthful retelling of events, but the liberties it takes actually serve to make this story less interesting.  Dr. Stone is not depicted as morally ambiguous, but unabashedly glorified as a sympathetic and selfless hero.   Richard Gere gives a solid performance, but his talent for playing empathetic characters actually works against him here.   Much as Dr. Stone manipulates his patients, the audience is manipulated into forgiving the ethically dubious nature of this premise.

Three Christs doesn’t just fail as a faithful adaptation, it fails as a movie.  The pacing is poor, the supporting characters are underdeveloped, and the plot is extremely predictable.  The build up to the climax leave nothing to the imagination and is so painfully scripted that it comes as no surprise to learn that it was a complete fabrication.  It’s one of many overly dramatic moments created just for the film and ultimately sends a message inherently contrary to that of the source material.

Despite its numerous narrative failings, there are a few silver linings.  Peter Dinklage, Walter Goggins, and Bradley Whitford act their hearts out as the Three Christs.  It’s these performances that make this movie watchable and, as a display of their talent, almost makes it a worthwhile experience.  Walter Goggins especially gives a strong and very memorable performance.  Also, there are a few feel good moments that are fun despite being contrived.  However, none of this comes close to saving a movie this deeply flawed.

What’s most frustrating is there is clearly a fascinating story to be told here.  Yet, instead of exploring the nuance of this complex period in the history of psychology, we are given this romanticized Hallmark version of it.  Instead of encouraging the audience to think, it continually steamrolls us with emotion.  I wouldn’t say the movie is totally unwatchable if you want to turn off your brain and roll with scenes that are painfully scripted and unrealistic.  Sometimes that’s fine in a movie.   However, here it is an egregious waste of a stellar cast and its thought-provoking source material.

Synopsis: Dr. Alan Stone finds three men afflicted with schizophrenia who believe they are Jesus Christ.  He forces them to confront one another in hopes of discovering means to treat schizophrenia that diverge from the cruelty of 1960s intuitions.