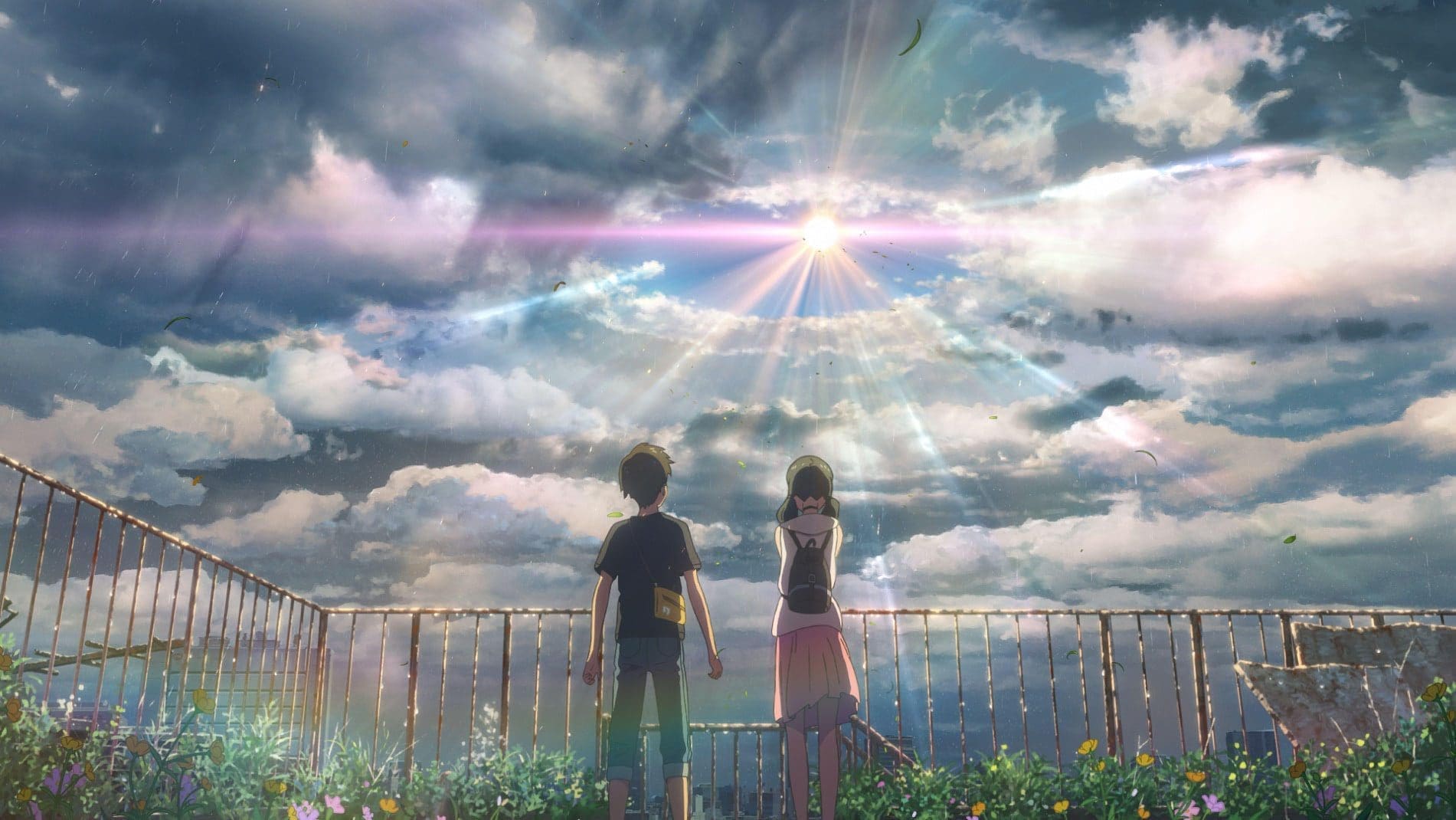 Every year, heavy rains plague Tokyo with severe flooding.  While in real life, underground infrastructures for flood control divert the water to avoid damage, in Makoto Shinkai’s latest film, Weathering with You (2019), power over Tokyo’s weather lies within one teenage heroine.

Director Makoto Shinkai has a history of stunning anime films such as Your Name (2016) and Garden of Words (2013.)  His animation work spans for nearly two decades, in which he has released six award-winning films.  For instance, Your Name became the highest grossing anime film of all time with its visuals and remarkable score by RADWIMPS. Weathering with You comes after as another one of Shinkai’s most thrilling works.

Weathering with You begins with the careful details of Tokyo city life.  From iconic and colorful signs that make up the neon jungle of Shibuya down to the gritty and cluttered walls outside of nightclubs, this film immerses viewers in the Tokyo streets from the beginning.  We follow Hodaka Morishima, a 16-year old who desired escape from his isolated island home and ferries to Tokyo. Rain continuously resounds in the background as he struggles to survive in the city. Eventually, he finds his place with an occult magazine agency researching the elusive sunshine girl.  By chance, Hodaka meets Hina Amano, a “100% sunshine girl” with the ability to control the weather.

Makoto Shinkai films tend to combine realistic worlds with a touch of fantasy, and Weathering with You follows suit.  The attention to detail sets the viewer in the dilapidated city life of Tokyo.  The streets of Shibuya bustle with vibrancy and a level of authenticity that makes even ancient and grimy buildings appear captivating.  The setting works to describe the characters further such as the child-like adornments of Hina’s home to the clutter of books and papers of the magazine agency.

The aspect of weather in this film ties the characters together, establishing a connection that impacts them physically and emotionally.  Binding the characters to one central element proves essential as this film introduces a diverse range of characters, such as an elementary school boy who is popular with girls and an occult magazine editor that does not believe in the supernatural. By having the power to change the weather, Hina appears to affect these characters directly, a tremendous responsibility for an adolescent.  She struggles alongside Hodaka through the stormy weather.

Various music montages by RADWIMPS play throughout the film which provide moments of fantastic visual storytelling alongside a remarkable score.  From soft piano melodies to uplifting songs, the music matches the film’s atmosphere almost perfectly. Listening to RADWIMPS vocalist Yojiro Noda singing with Toko Miura is an absolute pleasure.

In comparison with Makoto Shinkai’s other films, the lack of character development causes this film to not be as powerful as some of his previous works, notably Your Name.  Weathering with You is driven by fate in a similar way to Your Name, the characters do not grow as much as they do in the latter.  Though considering the strong character traits Hodaka and Hina possess especially in their desire to just live, this does not discount it from being worth watching.

The beautiful animation and enchanting score add Weathering with You to Makoto Shinkai’s repertoire of fantastical films showcasing the wonders of nature and how it brings us all together.

You can find tickets for the fan screening here as well as the wide release this weekend here.

About Weathering with You

Synopsis: GKIDS proudly presents the highly-anticipated new film from director Makoto Shinkai and producer Genki Kawamura, the creative team behind the critically-acclaimed, global smash hit Your Name. The summer of his high school freshman year, Hodaka runs away from his remote island home to Tokyo, and quickly finds himself pushed to his financial and personal limits. The weather is unusually gloomy and rainy every day, as if to suggest his future. He lives his days in isolation, but finally finds work as a writer for a mysterious occult magazine. Then one day, Hodaka meets Hina on a busy street corner. This bright and strong-willed girl possesses a strange and wonderful ability: the power to stop the rain and clear the sky…