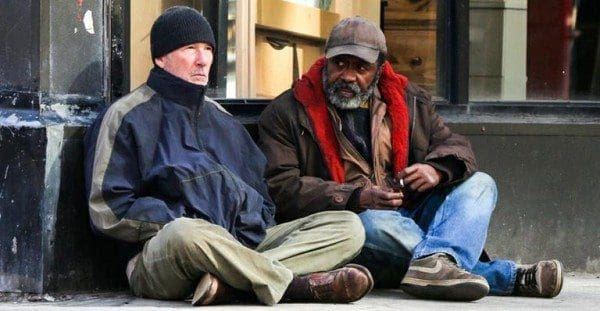 It can best be said that humanity as a whole is only as good as how we treat our least fortunate.  The homeless population in the U.S., and for that matter the world, has been an ongoing dilemma.  In order to avoid an emotional response or hold any personal responsibility, we as a society have created government programs who know how to best handle the somewhat delicate details of engaging these individuals and determining what’s best for their well-being.  Non-profit organizations also help to fill in the areas that the government cannot fully cover and, when called upon, we donate a few dollars or a can of peas their way as well.  The system isn’t flawless and often times the most in need fall to the wayside, unable to stabilize their life and escape the annual statistics of homelessness.  Whether it is related to work, money, mental illness, or domestic violence, if that person seeks our help, or doesn’t, we should be there for them.

In Time Out Of Mind, directed by Oren Moverman, Richard Gere plays George, a widower evicted suddenly from his friend’s apartment.  He is confused, tired, and wandering the streets of New York City with no identification.  His estranged daughter Maggie (Jena Malone) wants nothing to do with him.  George desperately seeks answers to his current situation, and how he came to live on the streets, by finding shelter wherever he can.  Shelters in New York City have a strict security process and discipline their residents to adhere to curfew and find employment if possible.  Guards monitor any disorderly conduct while you are arranged a bed and locker.  There is no privacy and you must deal with all manner of mentally ill or dangerous roommates.  George eventually meets Dixon (Ben Vereen), an old man well-versed in the procedures of homelessness.  He tags along with Dixon, who teaches him the do’s and don’ts.  They strike up a friendship of necessity that eventually brings up the very feelings that both of them have been suppressing for years.

The movie is a test in patience as it stretches out the very thin plot in the hopes of tugging at your heartstrings with the very real settings of shelter life.  The stress in getting help and staying sane when things are at their worst.  No matter how many stories people from all walks of life bring to the table, it is hard for us to focus on any one of them and this movie tries to give us a glimpse of a single man’s journey through the system.

Richard Gere is terrific as always and occasionally unrecognizable on the streets begging for money.  His voice is a pretty good giveaway though.  I enjoyed his performance in Arbitrage, another small film of his that focused heavily on one character.  He is strong on screen and even though the movie tends to meander you are invested in his outcome.  Ultimately George is trying to find intermittent moments to attempt reconciliation with his daughter, but mostly uses his time getting through the day on what little he has from panhandling.

Time Out Of Mind suffers from an exhaustive runtime, but succeeds in its main actor’s performance and the supporting cast.  Richard Gere and Ben Vereen are great together onscreen.  Jena Malone doesn’t have much screen time, but is serviceable in the few scenes she does have.  Kyra Sedgwick has an even smaller role in this movie and does a great job as well.  The movie could have done a better job communicating to its audience the purpose of the journey.  Maggie is an obvious unresolved conflict that George must sort out, but his personal journey is full of so many false starts that you wonder if it’s going anywhere at all.  We know George is lost emotionally and mentally, but that doesn’t mean we should be too.  Still the film manages to successfully put us in the shoes of a damaged man, body and soul, and for that it’s a worthwhile endeavor.

About Time Out of Mind

Synopsis: George seeks refuge at Bellevue Hospital, a Manhattan intake center for homeless men, where his friendship with a fellow client helps him try to repair his relationship with his estranged daughter.