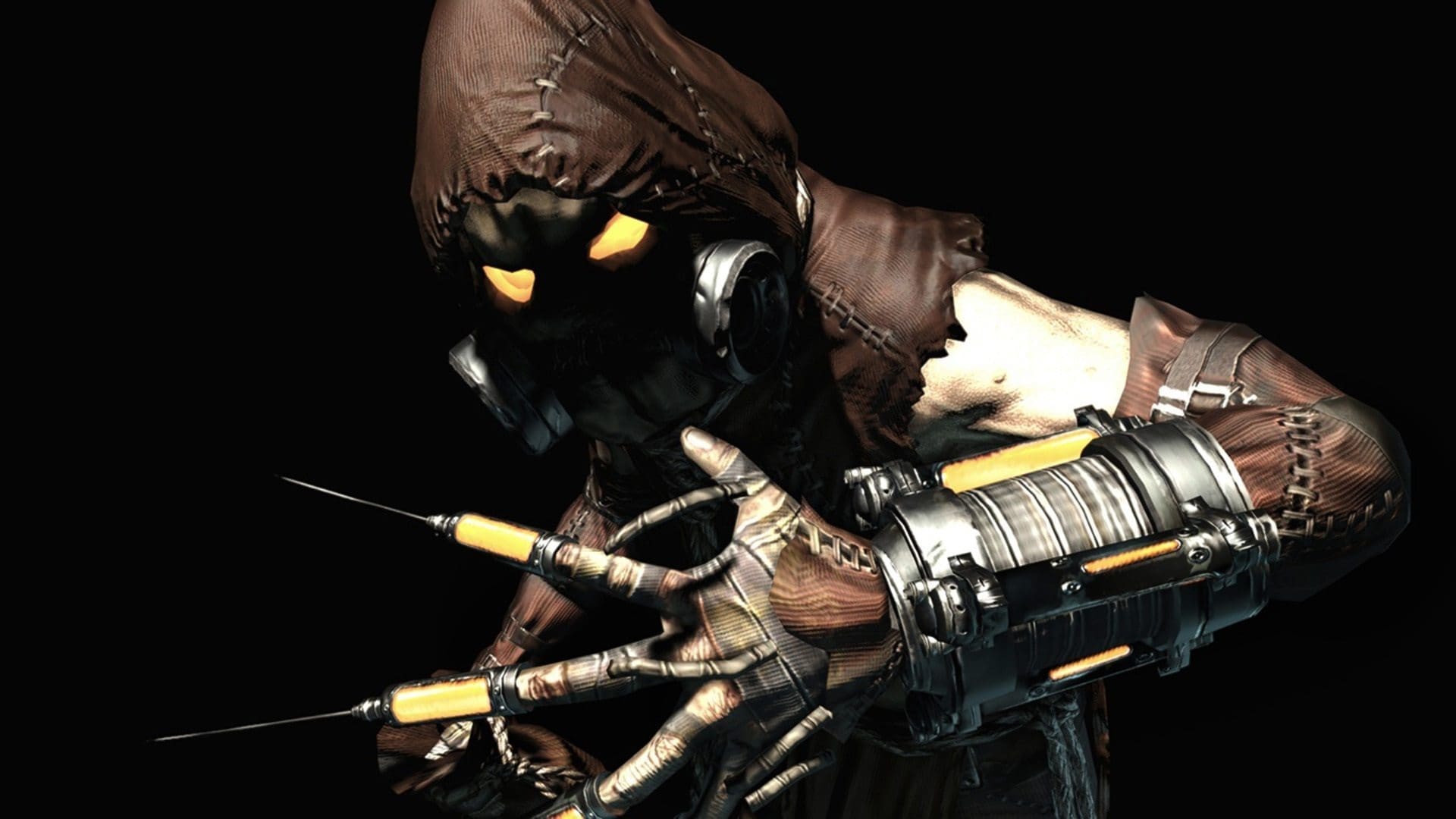 Video games bring us all different kinds of characters. We get to see brave heroes, evil villains, gorgeous femme fatales, anything and everything under the sun. But, what about those characters that don’t exactly fit in? Those characters that may have a few marbles missing. They bring something completely different to our character spectrums, but, their outlandish personalities have given us laughs, chills, and more questions than we ever thought we would see in a game. On today’s Top 10 list, we are looking at the Top 10 Craziest Characters in Video Games. Keep in mind, these are all just my opinions, if you disagree, or have your own idea, leave a comment below! These are in no particular order. But, let’s start our journey into insanity!

10. Kreig the Psycho from Borderlands 2
It takes a special kind of crazy to out crazy the regular psychos in the Borderlands series. Like the other nonsense spewing, prone to violence, wastelanders, Kreig has his own mask, and trade mark weapon, a buzz saw. But, why is Kreig crazier than the rest of the pack? It’s a special crazy to end up helping the people trying to kill you. Gearbox created a shot little feature called “A Meat Bicycle for Two.” to introduce the new character. We get to see Kreig’s struggle with himself, his inner thoughts, his sane side, who for some reason sounds like Sam Eliot, pleads with the dominant personality to act normal while talking to a certain siren. Unfortunately, he just invites her on the poop train and cuts a man’s head in half. Playing as Kreig is a treat, hearing his inane ramblings and even unlocking an ability to set yourself on fire. Kreig is a psycho we can’t just love to play.

9. Doctor Steinman from Bioshock
There are a lot of crazies down in Rapture, but one in particular always struck a chord with me. Doctor Steinman was once a gifted plastic surgeon, who made people beautiful. But, after splicing for too long, his mind started to break a part, and his view of aesthetics changed dramatically. Not ever seeing things as perfect, he butchers his patients, and even his own face. Finding his audio journals are a trip in itself, getting to hear the doctor go into madness. The fight scene with him may be the first boss battle, but, it’s surely not one we are going to be forgetting any time soon.

8. Psycho Mantis from Metal Gear Solid
The Metal Gear Solid series is known for their interesting characters, but none take the care more the Psycho Mantis. First appearing in Metal Gear Solid for the Playstation, Mantis, clad in a gas mask, taunts Snake and constantly breaks the fourth wall. Claiming he can read your mind, Mantis reads your memory card and then tells you how bad you suck at Castlevania. On top of that, with his powers, he even makes the controller vibrate. Being a fan favorite, he makes a small appearance in Metal Gear Solid 4, but, we see with modern technology, he just isn’t as powerful as he once was. Being a psycho who tangles with us personally, we all have a personal grudge, if not connection, with the memory card reading menace of yester year.

7. The Origami Killer from Heavy Rain
While the entire cast of Heavy Rain may have their share of problems, the main antagonist, only know as the Origami Killer defiantly has some issues. Kidnapping and murdering children is pretty twisted to begin with, but, the manner on how he does it takes it that one step further. Locking kids in storm drains and letting the heavy rainfall kill them by drowning. Further on in the game we get some more insight on why the character does what they do, but, revealing anymore would ruin a very good mystery. My advice is give it a play through and see what I am talking about first hand.

6. Vaas from Far Cry 3
Vaas is one of the best villains we have seen in gaming for quite some time. The head of a pirate group in Far Cry 3, Vaas kidnaps a group of young people, hunts and tortures them. Violent, and believing what he is doing is for the greater good makes him even more terrifying. Violent just for the sake of violent, Vaas hunts down his prey mercilessly, and enjoys both psychological and physical torture. Add all of that in with your character being under the influence of some psychedelic drugs and you have a cocktail for madness. Vaas makes me never want to attempt to go skydiving, less I end up getting stuck in his jungle.

5. Sugar Plumps from Little Inferno
Little Inferno is an indie game by the Tomorrow Corporation, makers of the popular indie game World of Goo. The game involves playing a game called Little Inferno, a fireplace setup where you burn things in order to stay warm. Playing as an unnamed child, you start getting letters from your next door neighbor, Sugar Plumps. She seems friendly at first, but, as the letters keep coming she seems more and more…unstable. As the game goes on, it seems Sugar Plumps may not be as crazy as we all thought, but, in order to find that out, you have to play the game! I’m not going to spoil that ending for you!

4. Moira from Fallout 3
Oh Moira, what can I even say about you, you made me do such…terrible things. Moira is both a sales person and researcher in post apocalyptic Washington D.C. Moira is very curious of how things work, but, can’t leave her shop in order to go test things out herself. So, she makes you, her guinea pig. Sending you to go get radiated, beat up, and maimed in order to finish her fallout survival book. Of course the book, which you do receive a generous copy of if you finish all the dangerous tasks, can be useful, but, if you are just sick of Moira’s shit, you can take care of her in another way.

3. Randall Forrester from Red Dead Redemption
He may not be a main character in Rockstar’s Red Dead Redemption, but, he is defiantly a character that made you raise an eyebrow. During one of the Stranger’s quests that are available in the game, you come across a quest called “American Appetites” there you meet Forrester. He is in the middle of the desert with a man with a broken leg. Lying and saying he was attacked, he asks you to catch the man when he attempts to run away. Capturing him, you bring him back only to find Forrester had plans for him…plans like eating him. Yep, he is a cannibal, and you as John Marston get to decide if he gets his next meal or not.

2. Scarecrow from Batman Arkham Asylum
I could have put a lot of characters from the Batman series on this list, but, I chose the Scarecrow for a reason. Not only is he pretty crazy, but, he makes other people crazy. Playing through the game and getting to his fight was probably one of the most terrifying moments in the game. Scarecrow, the lanky figure with a burlap sack over his head, uses a toxin to make people hallucinate their worst fear. Of course, Batman’s deals with his parents death and protecting his city. A crazed former psychiatrist always makes for a good crazy villain in video games and comics.

1. Trevor Phillips from Grand Theft Auto V
He is a possible cannibal with a meth problem who lives by a strange code. Trevor Phillips is one of the most fun characters in recent video game history. He is not a good guy, but, his abrasive personality and one-liners left me giggling as I rampaged through Los Santos. He butts heads with the other two main characters, and his unpredictability makes you wonder what he is going to do at every turn. Though he is defiantly crazy, he also may have the best grasp on society in the GTA game. He seems to be happy with who he is, and doesn’t want to change. He takes life by the throat and does what he wants. He may be nuts, but, hey, maybe we all are. Or perhaps, he’s actually the real sane one here….well…

Jeremiah Comstock could fit here too

You Gotta Play This celebrates Earthbound