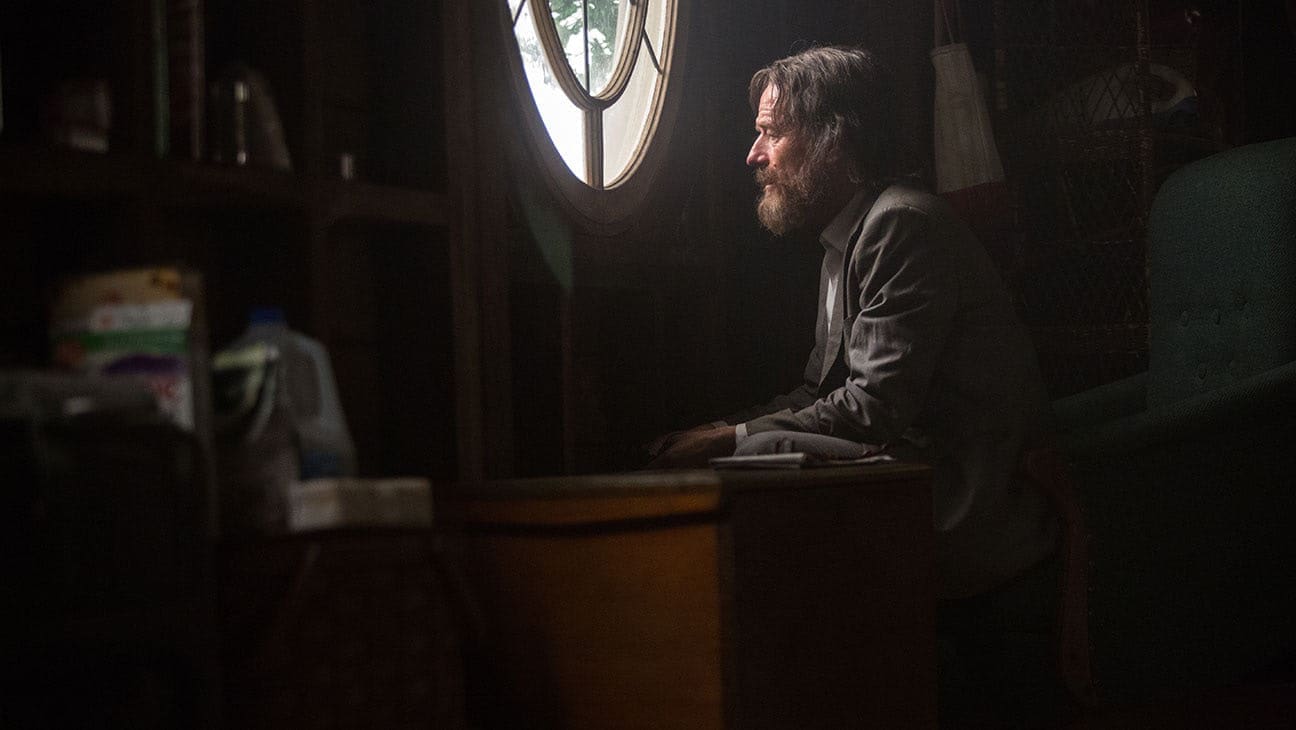 In the hustle and bustle of life today, we run from task to task, from meeting to meeting, numbly following routines and routes, until, for one man, a power failure during his commute causes a shift in his daily routine that results in him pausing outside his family home after a long day at work. A house ruled by a nagging wife in an unhealthy marriage based on jealousy sex and avoidant contact with his twin daughters. That seemingly insignificant hiccup to Howard Wakefield’s day and his reaction is this two-hour tale adapted by Robin Swicord’s of E.L. Doctorow’s short story “Wakefield”.

Wakefield’s a delicious think piece that demonstrates the insane range of Bryan Cranston (Breaking Bad) who plays the title character and voice overs practically the entire film from his own carriage house garage attic. See, upon his arrival home, his attention is drawn to the door to his attic door above the family’s detached garage. Following a raccoon up the stairs, Wakefield looks out a broken window down into his own home where his wife Diana (played by Jennifer Garner) is feeding their daughters and trying to reach him on his iPhone. Wakefield glances down at the phone, presses the mute button, and sits down to collect himself outside of the world’s noise. He wakes suddenly the next morning, realizes he’s late for work and becomes intrigued at how his family’s reacting to him missing. Thus begins the premise of the film. Howard Wakefield steps outside his own life to watch as a voyeur as his family continues on without him mere yards from where he looms in the attic where surprisingly no family member cares to go.

Through a paucity of flashbacks, we learn that their marriage was based on his winning a competition against his best friend to see who could bed Diana first. Wakefield won and they ended up married because that’s how things seem to work in this world. People get married, become pregnant, buy houses, get good jobs, pay their bills, and die of old age. This film examines what happens when a character attempts to escape this monotony to find something more.

Howard makes several larger than life pronouncements throughout his journey and I found several of them little over the top as if I were reciting Whitman and barbaric yawping from rooftops, but for the most part I appreciated what he declared about the life he’d been living. For example, declarations that he was “unshackled” and “became the Howard Wakefield I was meant to be” was a bit too much overarching exposition that could’ve more easily be shown through his characterization. Other bits like “I never left my family. I left myself” felt more like a sudden inspiration to reexamine the lives we all live.

Truly the only people with whom Wakefield has any real time relationship within the film are two differently-abled children who live next door in a group home. One evening they discover him and the three of them build a brief relationship as he ruminates not only about the fears of being caught but also how he will eventually reinsert himself into society after his existential detour concludes.

As Wakefield continually explores his relationship not only with himself but also with those he left behind, the audience grapples with the contrasting notions that Wakefield is either a self-serving egoist or true victim of his own construction. While Wakefield meditates on his relationship with his wife of fifteen years, I couldn’t help become angry at his selfish actions of purposefully abandoning his children. Relationships end every day. Divorce is commonplace is our society, but his desertion of his children weighed heavily on me as I screened this film.

Moreover, while Bryan Cranston’s one-man performance alone is worth watching, I did find several plot holes in the film. The glaring question of why no family member ever checks the carriage house garage attic will remain a mystery (yes, the twins do start up the stairs once but only to be scared away by noises). The confusion of timing in the film was distracting. What I thoughts were mere days were marked by his much longer hair and beard, and it wasn’t until much later in the film that the writer used holiday references to attempt to date stamp the narrative (e.g. pumpkins and costumes or bringing home a freshly cut Christmas tree). Or even after giving away all of Howard’s clothes and obviously struggling to make financial ends meet, why does Diana not sell her missing husband’s car? I’m sure many of these questions could’ve been solved by minute bits of dialogue.

As with many contrived narratives, as we march through the seasons and descend upon the year’s end, Wakefield’s story comes to a conclusion. I enjoyed having no idea how the film would end and while I found amusing irony in the final scene, I did feel cheated when the credits rolled. The conclusion itself reminds me of a question I had of Wakefield himself: Is he a coward to not face rejection? Or is he resolved to see this thing through? I’m not sure either is true albeit the acting talent alone satisfied me enough to recommend this film.

Synopsis: Family man and daily train commuter Howard Wakefield (Bryan Cranston) takes a almost year-long detour from his monotonous life to pretend to be missing all the while spying on his family from the family’s carriage house attic.