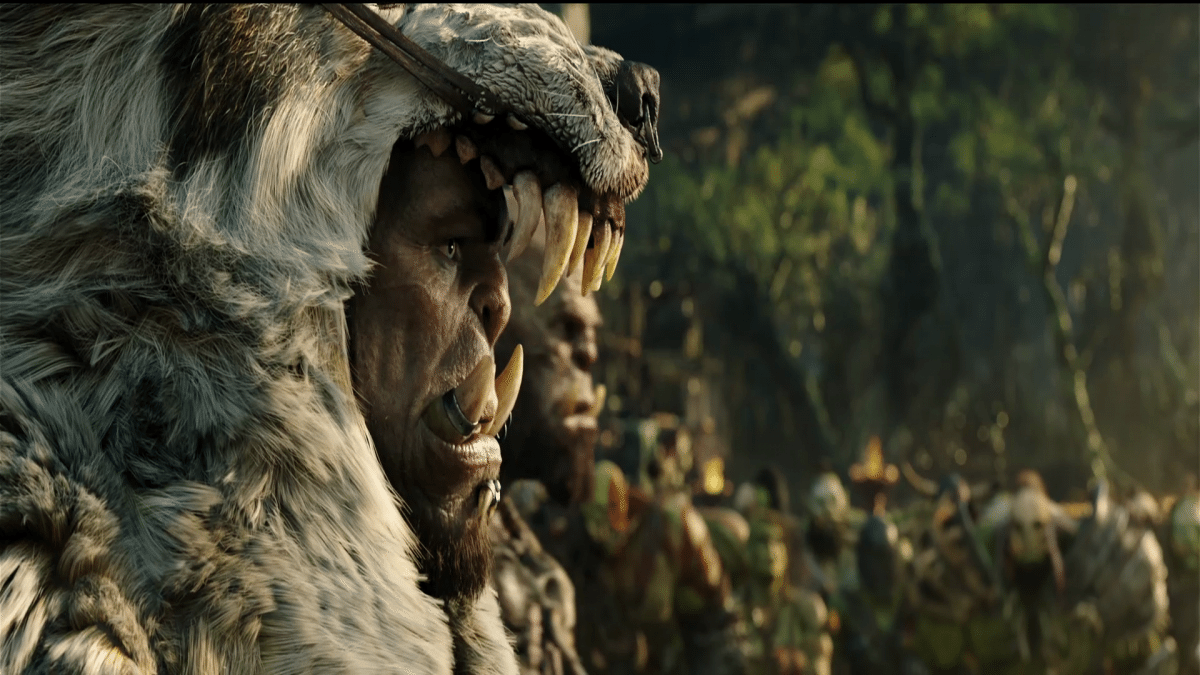 Let me say first off that I love a good fantasy adventure.  It’s great to see an entire world created that is different from our own, but with characters that have unique abilities and who share familiar personalities.  The best stories can immerse you in that world and leave you there without worry that you’ll get lost or confused by its unusual appearance and politics.  Lord of the Rings is a perfect example of a world, unlike ours in many ways, that we had no problem diving into.  A little narration here, a little exposition there, and we were on our way to Mordor.  I know the computer game World of Warcraft also has a very diverse and immersive environment.  Of all the adventures it has amassed over the years, I was curious which ones would be ready for their cinematic début.  There is very little I know of this game, but I do know my fantasy adventure films and Warcraft the movie is a feast for the eyes.  The brain not so much.

In Warcraft, directed by Duncan Jones, the orcs arrive in Azeroth from another plane of existence.  They cannot survive their lands any longer and must invade this new world to further their species.  Commanded by Durotan (Toby Kebbell), the Orcs conquer several villages and prepare for the eventual arrival of their remaining population.  Meanwhile news reaches the humans and King Llane (Dominic Cooper) instructs Lothar (Travis Fimmel) to obtain a prisoner for interrogation.  There is a female orc named Garona (Paula Patton), who is shunned by her people and provides a translator of sorts between the two species, a wizard known as Medivh (Ben Foster), who is burdened with protecting all of Azeroth from being destroyed, and Khadgar (Ben Schnetzer), another wizard who is necessary to the humans victories despite the comedic nature of his presence and subsequent dismissals by Medivh.  Many more characters make their introduction throughout this movie, including a not-so-subtle evil orc named Gul’dan, and their presence is more or less to provide bodies to fight in battle.  The underlying plot is whether or not the orcs and humans can live on this world together or does one species have to die off completely for there to be peace.

I should note the orcs in this story are not the bad guys, but their instincts are terrible.  They are like Klingons in their assessment of  situations.  Direct violence and confrontation before dialogue and negotiations.  That philosophy can’t last forever unless you think you possess a power that is unmatched by anyone.  Well surprise because there is a magic power that is shared by several people and your all powerful evil orc now has competition.  The human knights of whatever their kingdom is called, I’m not remotely interested in looking them up anymore, also have some skills of their own and aren’t afraid to let loose their fury as well.

The fantasy part of this movie is very interesting and entertaining.  It’s like an amalgamation of Lord of the Rings, Chronicles of Narnia, Harry Potter, and the Golden Compass.  Take those comparisons with a grain of salt because it’s really just visual cues I am referring to.  This movie makes its own path of wonder and succeeds spectacularly in that regard.  The orcs are well conceived and some of the best CGI to date.  The rendered landscape is pretty decent and the characters that inhabit them give it a nice medieval atmosphere.  The part of this movie that intrigued me the most was the magic and the wizards.  They have a wealth of abilities that are mysterious and exciting and you are given a fair amount in this movie, but you hope for more.

The adventure part of this movie, much like the story itself, feels very flat and two-dimensional.  The movie tries to give you depth from the characters on both sides, but it doesn’t quite work.  You have orcs that want to fight the humans, but they also try to think about why they are fighting and that dialogue just feels stale.  I equate the orcs to Grundy in the DC universe.  Grundy is always trying to formulate a cohesive, logical idea, but it’s a caveman simplicity that can’t quite piece together all the factors that are involved.  So the orcs are dead set on fighting humans, but there might be trouble in their own clan and maybe they need to clean house first before making anymore drastic decisions.  There’s also a side story of a baby orc that shows up a few times throughout the movie, but we lose interest in that because the main story is so weak.  The humans don’t fair any better in this movie as most of them are just cannon fodder.  Lothar does most of the heavy lifting as does Medivh and Khadgar.  King Llane is alright as a character for the most part.

I did have a problem with the age of some of the characters in this movie.  I felt some of the performances would have held more weight if they were done by an older actor and most of the humans in this movie looked like they were in their 30’s.  Particularly Ben Foster’s Medivh.  I pictured someone closer to an Alec Guiness or Ian McKellan type.  I know it’s nice to see a different take on a powerful wizard, but, for someone who is supposed to have years of experience in magic and travelling the world, Foster seemed young for that backstory.  It would have also been nice to see older knights interspersed throughout the army.  It made the whole kingdom feel like as if it were run by all young people and older adults were banished for some reason.  Again it became one of several aspects that plagued my mind as I consumed this cinematic environment and its culture.

The difficulty I’m finding with enjoying this movie as a complete experience is the lack of cohesive storytelling or a lack of nuanced characters.  Even if the story was stronger and they gave us a more compelling reason for the orc invasion, the evil orc wizard, the random magical subplots, the unnecessary use of Glenn Close (not a spoiler and you barely recognize her), and an ending that screams sequel in the works, you are still stuck with characters that don’t engage you on an emotional or intellectual level.  It’s based on a video game and it’s a fantasy adventure, but it’s also a movie.  Whether it’s in the horror, comedy, musical, or sci-fi genre, you want characters that speak to you with some depth.  If that depth is missing, you notice the poorly edited plot points that much more.  Plot points that are abruptly introduced to you without warning or explanation and do not service the story.  It just muddles the concept and leaves you trying to find a way back into this world after being forced out with bad narration.

Warcraft is a heavily flawed film that is bandaged quite well by superb CGI and fight scenes.  The magic elements give it some originality and actually make me think of what we might expect in Doctor Strange.  I’m not impressed overall with the acting, but Paula Patton, Ben Foster, Travis Fimmel, Dominic Cooper, and Ben Schnetzer do a serviceable job in their respective parts.  I only recommend it in IMAX because of the spectacle it is, but if you demand more from your movies hold onto your money and wait until it hits your local streaming service.

Synopsis: The peaceful realm of Azeroth stands on the brink of war as its civilization faces a fearsome race of invaders: orc warriors fleeing their dying home to colonize another. As a portal opens to connect the two worlds, one army faces destruction and the other faces extinction. From opposing sides, two heroes are set on a collision course that will decide the fate of their family, their people, and their home.