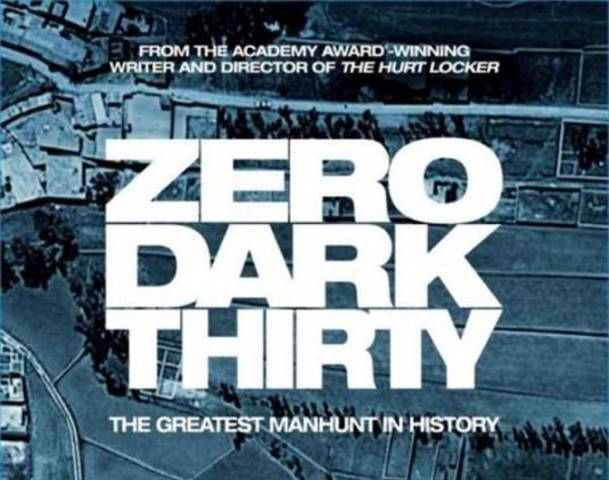 Tuesday, September 11, 2001. We all remember where we were. I was in tenth grade at the time. I woke up and turned on the TV. I initially thought it was a small aircraft, not realizing the size of the Trade Center towers. We listened to the Kevin and Bean show in California on the way to school. Normally it was a comedy show, this morning they somberly kept us up to date with what was going on in New York. By the time I arrived at school the first tower had fallen and by the time first period was over the second was gone. This is how Zero Dark Thirty starts. We’re in darkness as we listen to frantic radio calls and 911 recordings of first responders and victims trapped on the top floors of the burning buildings. I would argue that this is one of the most powerful scenes in recent memory and all we are witnessing is a black screen, a black screen that manifests the darkness that shrouded that day.

We pick up two years later on the manhunt for the perpetrator of the attack, Osama bin Laden. Screenwriter Mark Boal and director Kathryn Bigelow manage to turn a decade long crusade into a gripping procedural that follows a female CIA agent, known only as Maya, as she tracks down the infamous terrorist. Maya is played by Jessica Chastain (Lawless) with a stoic humbleness that brings a human element to the story. Most of her colleagues are relentless and robotic because they have become numb to what they’re doing in their daily lives. At one point one of her partners transfers to the home office of the CIA in Virginia because he needs a mental break among other things. Maya, however, knows what she’s doing but is nervous at first because she’s new to their tactics. She eventually grows stronger, but retains her heart and is the driving force behind the operation, she makes it personal because she’s lost friends to this.

As to the movie’s critics, if anything, this movie is anti-torture. We ran an interesting article from Black Hawk Down author, Mark Bowden on the subject and you can read it here. When information is gathered from the enhanced interrogation techniques in the movie the information turns out to be mostly false. If you want to see a little movie that is pro-torture then I suggest you check out Unthinkable. People who nitpick the historical accuracy of this movie are probably the same ones who called out Pearl Harbor on its inaccuracies. Do you really think Michael Bay is going to deliver a historically accurate movie? Didn’t think so. These aren’t History channel documentaries here, they are movies, which are made to entertain. Should this movie be shown in classrooms? Absolutely, it’s a movie about a defining point in our generation.

Even though I knew how the story was going to end  I still found myself shocked. Osama bin Laden’s compound is found with an hour remaining in the movie where the narrative then switches to Maya trying to convince Washington that this is the place they’ve been looking for. The agents were actually looking for bin Laden’s courier, but happened to stumble on a gold mine. Maya knows he’s there and makes it a point to remind her boss how many days have passed since its discovery. I’ve never been able to fully understand the term “white knuckle” when referring to movies, but once the decision is made to raid the compound that is exactly what I felt. My heart was racing and my palms were sweaty. Kathryn Bigelow bookends Zero Dark Thirty with two of the most intense scenes ever filmed, or technically not filmed. The SEALs board two top-secret stealth helicopters and from then on it’s literally edge of your seat nervousness. The tension comes from the time it takes from once it starts until once it ends. The moviegoer in me expected some five-minute shootout when in fact it was closer to thirty, and from what I hear it is almost real-time. The scene swaps back and forth between the night vision POV of the SEALs and the eerie darkness surrounding the compound and the reflection of the night vision lenses is almost haunting.

I found it very emotional once the raid was over. Just like I remember where I was when this all started, I remember where I was when it all came to an end, so to speak. I’ve seen World War II vets break down during screenings of Saving Private Ryan and I think I understand now where that comes from. I was there for all of this. These events have impacted our lives, some more than others. I’ve had friends who fought that fight. I hope this movie touches everyone who has been directly, or indirectly, impacted by this, because I know I was.

For a decade, an elite team of intelligence and military operatives, working in secret across the globe, devoted themselves to a single goal: to find and eliminate Osama bin Laden. Zero Dark Thirty reunites the Oscar-winning team of director-producer Kathryn Bigelow and writer-producer Mark Boal (The Hurt Locker) for the story of history’s greatest manhunt for the world’s most dangerous man.