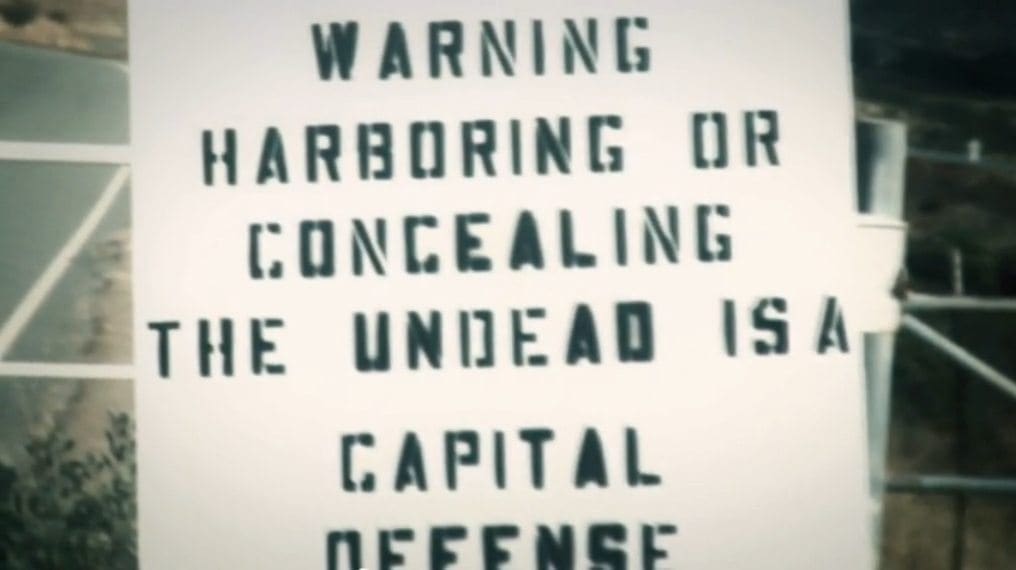 Universal Dead starring DB Sweeny, Gary Graham and Doug Jones is a web series written by Kelly Parks (who is also one of the producers). He hopes to turn it in to a feature film that takes a different approach to the origins of the Zombie outbreak.

“I love zombie movies but the idea of the zombie outbreak being caused by a virus never seemed workable to me.” Parks told me in a recent interview.

The well filmed and acted show starts with the characters of Captain Trent (Sweeny) and Dr. Macavoy of the CDC (Graham). They are traveling to a hidden secured base where a Dr. Vataber (Jones) has made claims to have new information about the outbreak.

“We originally were going to cast it with local San Diego actors (it was all filmed in or near San Diego). We did find some awesome local actors but then by chance I met Doug Jones (HELLBOY, PAN’S LABYRINTH, JOHN DIES AT THE END) when he gave a talk at a San Diego Filmmakers event and he agreed to read the script. He loved it and he did a wonderful job as the brilliant but conflicted Dr. Vataber. Casting Dougie made us confidant enough to reach out to a couple more people. I’d met Gary Graham (ROBOT JOX, ALIEN NATION [TV], STAR TREK: ENTERPRISE) at Comic Con and it turned out he’d read a script of mine that was floating around and liked it, so we hit it off. And I met DB Sweeney (FIRE IN THE SKY, EIGHT MEN OUT, 24) at a Hollywood get together and it turned out Gary Graham was a mutual friend. He agreed to read the script and he was in.”

San Diego has been lost to the zombies with no chance of recovery. The position of the CDC is that this is a pandemic. The use of the description “the Undead” is not one supported by the government. They are to be referred to as “the Infected.”

“Infected” with what though is the question.

“I’m a former aerospace engineer, computer programmer and a nit-picky science geek. I’m the guy who points out all the mistakes in movies. (“There is no sound in space!”) I used to write movie reviews for FeoAmante.com and I’d always include a “Science Moment” where I’d discuss whether the movie got its science right.”

“In Universal Dead, the argument Doug Jones’ character makes about why it (a virus) doesn’t work is based on things I’d said to my geek friends many times. So I finally came up with the alternate (but still sci-fi) explanation in the web series.”

Dr. Vataber is a physicist, not a doctor, so Macavoy questions his ability to bring anything new to the table. But Vataber and his unrelenting dedication to the basic facts of science and physics during his “demonstration” with a “live” zombie” forces Dr. Macavoy to rethink his position on everything he has stood by so far.

“The continuing popularity (of zombies) has to do with our fascination with gloom and doom. Look how people were freaked out by the Mayan prophecy of the end of the world (a complete myth, by the way — the Mayans made no such prediction) and yet still strangely gleeful about it. And of the ways the world could end, what’s more truly horrible (and therefore fascinating) than the dead rising to eat the living?”

“I plan to make every effort to get the movie made. The three episode web series was always intended to be an extended trailer to generate interest in making a feature. It’s effectively the first act of the movie. I wrote the full feature script so it’s ready.”

“Universal Dead is a different take on the zombie apocalypse. I intend to take the genre in a new direction. Let me show you.”

*Update* – Universal Dead has been accepted into the LA Webfest 2013

Interview with “Divergent” Cast and Photos from the AZ Premiere