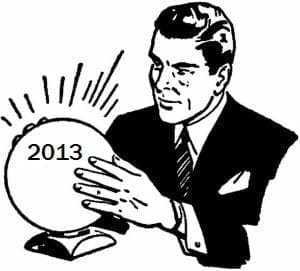 11. Disney will finally announce a big-budget remake of The Black Hole, satisfying the demands of that one guy in Inglewood.

10. The British Medical Association will discover that the Doctor does not have enough credit-hours for certification, and he will be forced back into residency.

8. A popular mainstream superhero will gain self-awareness and leave the pages of his comic book; everyone blames Grant Morrison.

7. Fanboys will spend the entire year complaining about Star Wars VII without any actual knowledge of what will be in the film.

6. The Broney fad will be replaced by Carries: adult male fans of the Care Bears animated show who also have the power to move things with their minds.

5. George Lucas will retire to Belize, moving in to the hacienda previously owned by security mogul John McAfee.

4. Fans turn against the upcoming Justice League movie when it is announced that Justin Bieber has been cast to play Snapper Carr.

2. Now that she has conquered both the worlds of literature and film, JK Rowling will turn her eyes towards an animated television show, “Weasley Babies,” concentrating on the early adventures of those adorable ginger wizardlings.

1. For its season finale, Glee will do a theme episode about the Walking Dead, but someone won’t do the proper research, and three of the cast members get turned to walkers.  Stay tuned next season to find out which ones!

Gambino is a Mastermind.