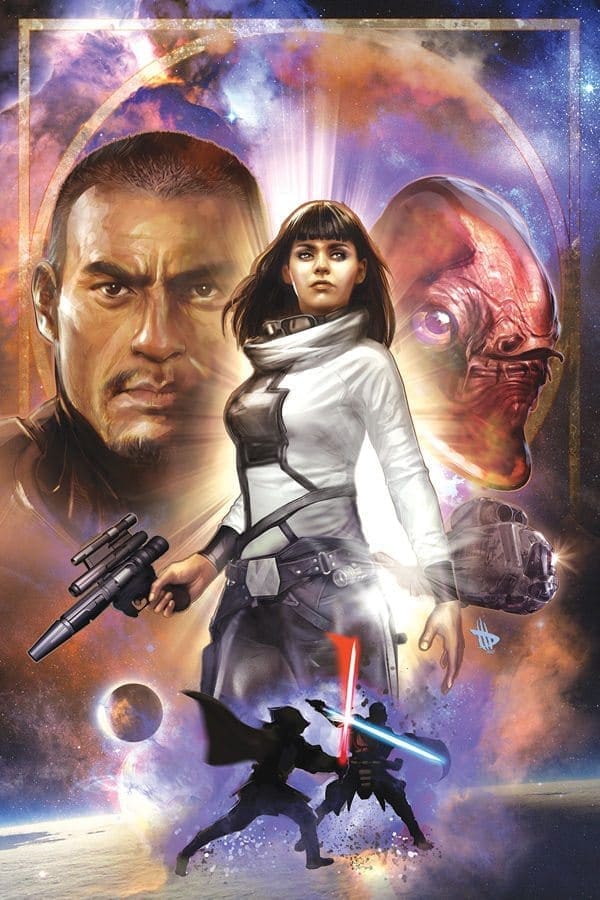 Some comic books might be a great jumping on point, others are one-and-done stories, or some are just worth the price of admission alone.

This week, Grant Morrison‘s finale issue of Action Comics hits shelves, Jeff Lemire and Ray Fawkes bring Constantine over to the DCU, BKV and Fiona Staples‘ Saga continues to be the best thing is comics, and Gabriel Hardman and Corinna Bechko (Betrayal of The Planet of the Apes, Planet of the Apes Cataclysm) new Star Wars book just sounds interesting.

Cyborg takes center stage as events fall into place for next month’s massive new story arc: ‘OFF THE GRID’!

Also, Batman continues to be question the Superman/Wonder Woman alliance and Aquaman’s future with the League.

Plus: The Shazam backup story reveals the origin of Black Adam-and what it means for Billy Batson’s survival!

The lead story, written by Grant Morrison with art by Rags Morales, Brad Walker, Cam Smith and Andrew Hennessy, is destined to be a milestone in The New 52 – and that’s all we can say about it for now!

Plus, in the backup story, written by Sholly Fisch with art by Chris Sprouse and Karl Story, learn how Superman’s battle against the Little Man has some very far-reaching consequences. Mayor Dillisch deals with body parts littering his highways. May Tao investigates Lester while Lester investigates May Tao. Em gets an invite to an unusual Church meeting.

At long last, Aric of Dacia will take his revenge on the alien race that have pursued him at every turn. As his Visigoth forefathers sacked Rome, so too will Aric of Dacia bring a devastating assault to the doorstep of his oppressors. Taking the battle directly to the Vine planet of Loam, he will decimate their armies, he will level their cities — and he will not stop until the whole of their empire is reduced to ash. But when one man declares war on an entire world, what painful consequences will he reap for himself — and for the whole of human race?

Featuring the return of superstar penciller Cary Nord, PLANET DEATH is THE event that will define X-O Manowar’s place in the Valiant Universe. Don’t miss this juggernaut of a storyline when X-O Manowar descends on PLANET DEATH in March! The epic finale of DEAD PRESIDENTS!

Not everyone gets out alive! I mean, besides the Presidents, duh. After a tragic encounter with an artifact known as ‘The Dreamstone,’ infamous treasure hunter Fabian Gray was possessed by five literary ghosts and has been granted access to their unique abilities.

Join writer FRANK J. BARBIERE and artist CHRIS MOONEYHAM for the most exciting début of 2013 as they introduce you to a unique world full of action, black magic, exotic locales, and literary allusion!

The star of JUSTICE LEAGUE DARK is unleashed in his all-new ongoing series!

Liar, cheater, manipulator . . . John Constantine is all of these, and yet he uses these skills and more to protect the world from the darkest corners of the DC Universe.

What Constantine learns in this first issue will shake the very foundations of the New 52. . . and only he knows how to deal with it!

In an all-new adventure from Joe Dredd’s early days as a Mega City-One Judge, writer (and Eagle-award-winning 2000 AD Editor) Matt Smith presents a tale where ‘all the young juves, carry the news,’ only in this case, the news is delivered with a lethal blow! Despite her famous heritage, Ania Solo is just a girl trying to make her way in a galaxy gone bad. But it all gets worse when she comes into possession of a lightsaber and an Imperial communications droid-and discovers she has been targeted for death!

* In the aftermath of War, the Solo clan lives on!

* From the acclaimed creators of Betrayal of the Planet of the Apes!