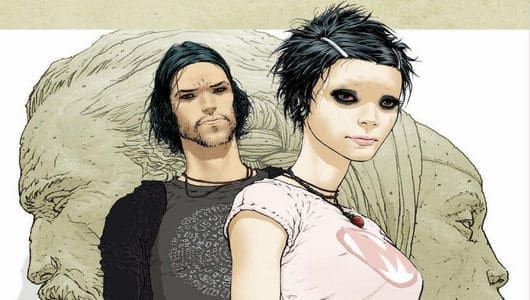 This week, “The Creep” HC by John Arcudi and Jonathan Case hit shelves this week and I highly recommend it, Tom Taylor‘s “Injustice: Gods Among Us” comic book continues to kick ass, “Deadpool” #8 starts up a new story arc and “Deadpool Killustrated” ends with issue #4, “Superman Family Adventures” is without a doubt the best Superman book out right know and it’s ending with issue #12, and Mark Millar and Frank Quitely‘s “Jupiter’s Legacy” #1 finally hits shelves and boy does it look good. A young boy puts a gun in his mouth and pulls the trigger. The police don’t care—not about his death or the death of his best friend two months earlier. The dead boy’s mom seeks help from an old flame that’s employed as a detective. Will the detective’s freakish appearance get in the way of uncovering the terrible secrets of these two teenagers? Collects issues #0-#4.

* From the writer of B.P.R.D. and the artist of Green River Killer. In this special issue drawn by TMNT co-creator Kevin Eastman!

The Turtles have struggled to survive against unstoppable enemies and impossible odds. The time has come for the next stage of their training to begin. The lesson turns deadly, though, when a mysterious new opponent arrives and teaches the Turtles they have MUCH left to learn! All-new digital adventures in print for the first time!

Based on the upcoming DC fighting game from NetherRealm Studios, creators of Mortal Kombat!

Superman discovers that not every nation on Earth is willing to fall in line with the new world order!

A team of the world’s most powerful Super Heroes unites to confront an old ally. When only one can survive, which will it be: the man or the bat? When juves across sector start manifesting psychic abilities, Dredd must team up for the first time with Psi-Division to combat the spreading chaos. But just what is causing the psi-outbreaks as it crosses the dimensions — and what does it have in store for Mega-City One? Can Deadpool rid the universe of the scourge of classical literature?

The Three Musketeer are all for DONE! Sherlock Holmes gets to the bottom of HIS OWN GRAVE! First. . . flashback to Deadpool’s adventures in yesteryear with Iron Man!

Then. . . Deadpool is hired by a demon to reclaim damned souls!

Plus. . . Wade gets in touch with his feminine side! Following the high crimes in the début issue of EAST OF WEST, the fallout spreads across the broken nations of America. Forces align to stave off the apocalypse, while equally powerful ones do everything they can to bring it to pass.

One of the most exciting new books of the year, this is EAST OF WEST, a brand new, ongoing, monthly comic from the award-winning team of Marvel’s FF, JONATHAN HICKMAN and NICK DRAGOTTA. While London deals with the brutal Badoon invasion, the fate of the Guardians of the Galaxy may have been decided millions of miles away. Because you demanded it! The return of the lunch lady! Er, we mean, the return of DARKSEID!

Has he returned for good-or evil? Is he going to make us pancakes?

When the Super Family leaps into action, will they be trapped in Apokolips?! The comic-book event of 2013 finally arrives as superstar creators MARK MILLAR and FRANK QUIETLY give us the superhero epic that all future comics will be measured by.

The world’s greatest heroes have grown old and their legacy is a poisonous one to the children who will never live up to their remarkable parents. Unmissable.