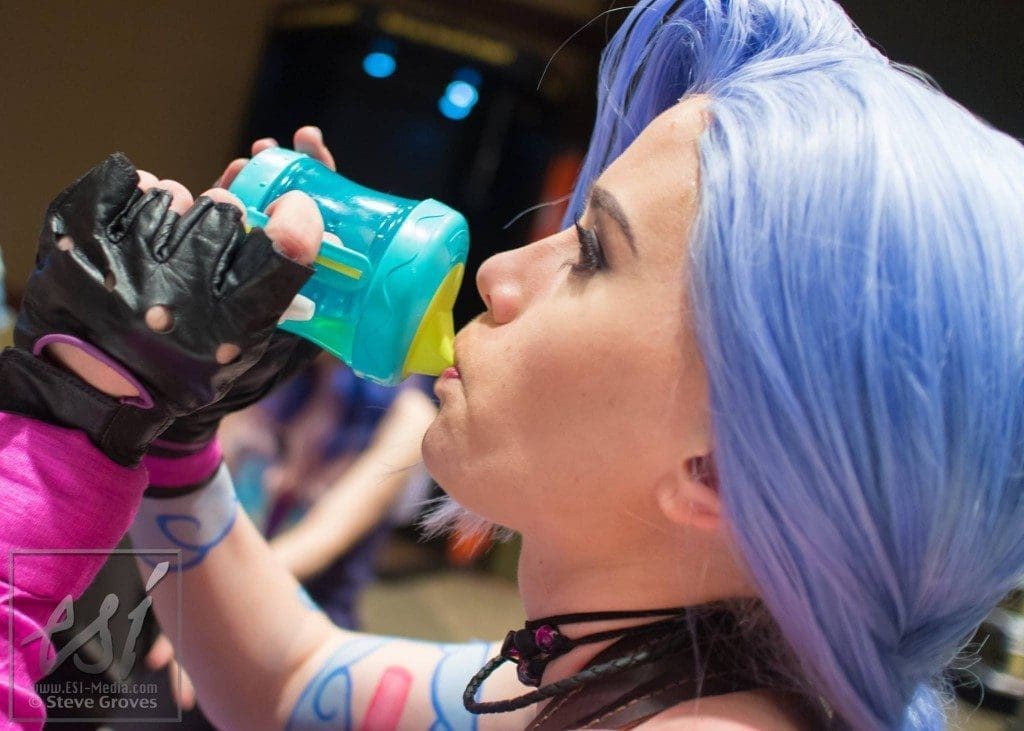 So its summer time once again which means everyone is packing up and hitting the road for conventions across the country (and if you’re lucky enough, the world). Either way, there is nothing quite like finally arriving to your destined weekend of cosplay, comics, and panels. We’ve also all been there when the magic starts to fade a little and someone gets ‘hangry’ or a costume piece goes awry. As much as we try to pack, prepare, and of course have absolutely every piece to your costume, inevitably something comes up and you’re left in a bind. As we all frantically finish those final touches on our costumes, here are some other things every cosplayer must have for a simple and smooth convention experience.

Gatorade or Water… You need a ton.

Your health is number one. Never forget that. It’s insanely easy to get caught up in all the excitement of running from booth to booth in the vendor as you’re frantically searching for the best price on that limited Funko Pop figure and forget simple things like water or some other drink that will boost your H20 intake. However, staying hydrated is the number one best thing you can do for yourself while you’re out there. This is doubled when you’re in a huge costume, and even more so if you’re living in the Southwest (Arizonans, I’m looking at you). Bring Gatorade and you’ll be in good spirits and feeling more energized.

Also, with your water throw in a packet of Airborne or Emergen-C. This little fizzy tablet will save your life. This will boost your immune system to help avoid all the con-cooties out there, but since it’s packed with Vitamin C, you’ll get a little Popeye style boost of energy!

This one is just general good advice. At least once in your lifetime you’ve been around someone who smelled like Bigfoot after a hot summer’s day. That’s even more awful when you’re stuck in a small room for hours. Be kind and courteous to your fellow convention goers and apply liberally and often. Also, as a hygiene product, I’m also throwing Purell or other antibacterial products in here because no one wants to catch something during (or after) a convention.

Emergency Contacts (who you gonna call…?)

Again, generally good life advice here, but you should always have a list of emergency contacts on you and on paper! Whether you’re in your hometown or some new exotic spot in the world it’s a good idea to have the number of emergency services that you can call if you’re in a bind (lock company, local hospital, taxi company). It’s also a good idea to have a list of YOUR emergency contacts too. You never know what can happen and if something happens to you, you want to make sure you’re taken care of. Have a list of people you can count on with you. I advise on paper too, cause there is nothing worse than your phone dying and you having no way to get to those numbers…

For boys and girls in heels alike, I say invest in a solid set of insoles. Your feet will thank you! You’re in for a weekend of walking at any convention and sitting space is going to be a hot commodity and in short supply everywhere you go. Put these little squishy gels in your boots, sneakers, and definitely your high heels and you’ll be able to stand the long walk to the hotel or food at the end of the day (and better yet Sunday).

And ladies, have a pair of emergency flats on you too! You never know when you’re going to just need to pull those heels off. No one wants to walk on the floor or worse the street in your bare feet or cute tights. For about 10 bucks you can get Dr. Scholls Fast Flats. These are little flats and fold away into a cute little wristlet, ready to go when your feet can take it anymore.

If you’re a cosplayer, you know that the night before the con you were frantically trying to sew together those final pieces. You also know that once you’re out on the convention floor there is always a chance something is going to pop off or come undone. Never fear, if you have an emergency sewing kit packed with the essentials you’ll be the hero of the convention! Of course be sure to have: Super glue, thread, scissors, needles, and any replacement parts for costumes. You may not always need it, but when you do, you’ll be thankful! Worst case scenario, if you don’t need it, someone else might and as we know, sharing is caring!

Now, you might look at this and say “shouldn’t these be in the emergency sewing kit?” Sure, you can definitely keep them with it, but these two are so important they get their own category. If for some reason you can’t have a mini sewing kit, safety pins alone will suffice in the event of a costume emergency. Bobby pins are a girl’s best friend just about any day to begin with, but when it comes to wigs and keeping it together for a convention she who holds the bobby pins owns the world. Seriously, I always take a full pack of bobby pins with me to a convention. Not only are the useful, but you know you’re going to lose about half of them before you pack up to head home.

Convention food and eating out is expensive. Who needs to spend $15 on mac and cheese (even though in your soul you feel it’s going to be the best mac and cheese you’ve ever had) when there are comics and Funko Pop figures to buy?! Not me! Snack foods from home are cheap and typically better for you than what you can find at a convention too! Bring something with a little protein like trail mix with peanuts or jerky and you’ll be feeling fulfilled and full of energy you need to tackle the convention. Plus, now no one is going to falcon punch you for being ‘hangry’.

This is another item that is handy to have in general. At a convention this becomes even more important. No one wants a blister to ruin their convention going experience. Plus there is a number of other lame things that can happen that result in needing a band aid, disinfectant spray, or an alcohol swab. It’s also not a bad idea to include some aspirin and some alka seltzer too. You never know when traveling can upset your inner balance or you need the all ailment curing powers of aspirin. Plus, taking an aspirin prior to hitting the convention floor can help pre-emptively avoid aching feet, knees, and backs.

Something to Do… (book, handheld games)

You know that panel you really want to see? The panel that you traveled from a distant land to catch? The one that’s almost the entire reason you came to this convention for? Well, as it turns out it’s in the middle of the day and the convention doesn’t empty the hall in between panels. If you want to catch the panel of all panels then you need to sit and wait for hours to get a seat, let alone a good seat. What is a con-goer to do to pass the time? Well thank goodness you brought your book or some other handheld device to pass the time. It might not be the most glorious way to spend your convention time, but hey, you got to see THAT panel. At least you won’t be bored!

This one seems either obvious or strange since we have credit cards and everyone has one of those Square card readers. However, if there is a weak wifi signal or your card is just on it’s last leg, cash is king. Plus, no doubt at some point someone will end up covering something for you because the place you’re at won’t split bills (or something else lame) and you’ll need to pay someone back in cash. Plus, singles are really useful when it comes to tipping cabs, bellhops, and other helpful people you’re bound to run into during your convention experience.

GNN readers, do you have your own convention must haves? Let us know!! We’d love to hear from you!!