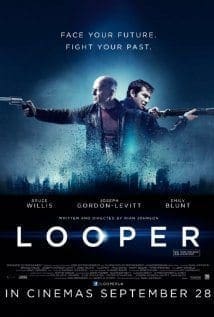 Ah Looper, the movie everyone was excited for and no one will go see. It’s true and that’s a shame. I read on Twitter that if you don’t contribute to Looper’s box office then you are no longer allowed to complain about Hollywood having no original ideas, I couldn’t agree with that more. Well, maybe a little more, but don’t take that as a knock against this movie. Before we go any further I just want to get something off my chest, I hated Brick and I thought The Brothers Bloom was boring as hell, so I was a little hesitant when I found out the writer/director of those movies was the same one that did Looper. Luckily someone in Hollywood had enough faith in this guy to give him some more money and have one last crack at redemption, in my eyes.  Mission accomplished, sir.

Looper tells the tale of a guy, Joe, who makes musical recordings that can play over and over again, no wait, he’s a specialized assassin that kills people from the future, yeah, that’s it. They call them loopers because once the future mob feels that it is done with the pastassins (past assassins [I made that up]) they send the future pastassin to the past to be killed by their younger, better looking selves, thus closing the “loop.” Confused? It’s really not. But naturally, when your future self comes back, most loopers are a little taken aback (in time ha ha) and that’s when the fun begins.

This movie was dark, and I don’t just mean in tone, it’s literally dark. Nighttime feels real and adds to the feeling that this future is not safe. The world the characters inhabit is dirty and the term “used future” comes to mind. It’s what Back to the Future would look like if David Fincher made it. Speaking of Back to the Future, remember when Marty was looking at the picture of his family watching them all disappear? Looper takes it up a notch (Bam!) with actual people disappearing and more specifically, body parts. I’m guessing that some energy crisis has plunged the world into this sad state of affairs. All of the vehicles are retro-fitted with make-shift solar power panels attached to the hood and trunk. The populace looks like technology has moved faster than they can keep up. The looper’s guns are referred to as blunderbusses, the gangsters use old timey six-shooters, even JGL drives a pristine Miata. The time machine itself was claustrophobic and scary which is how I imagine time travel would actually be.

Even though time travel is the main premise of the movie it is but a small facet of the universe. A larger part of the narrative, which you might have picked up on in the trailers, deals with telekinesis. A small percentage of the population is gifted with this ability and it is suggested that most people have very little skill, but there’s talk of stronger ones. The movie’s universe is so large and touches on so many ideas that you could fill ten other movies with backstories of all the characters involved. I would love to see a television show set in the Looper universe. Universe. I just wanted to type that one more time.

The two Joe’s are ultimately pitted against each other, and not in the way you might think, and in a way I will not get into because I believe it will ruin the movie for you. Even though they are the same person they are motivated by different goals that will evolve like Joe’s noble to selfish acts and Joe’s selfish to noble acts.

Johnson’s writing is solid and flows naturally. He also doesn’t disappoint with the camera and packs scene after with interesting visuals and camera movements. My one red mark, which prohibited Looper from obtaining a perfect 11, is that I didn’t feel that Bruce Willis’ future Joe was fleshed out enough. I needed to see more of his arc to really connect with him.

Looper definitely lives up to the hype and comes hot on the heels of Dredd, which means we won’t get another movie like this for at least ten years because you have to space these things out. Not since The Matrix has a movie dared to be so original and I really believe it will be this generations Blade Runner, although not as ambiguous.

After Who: The Day of The Doctor