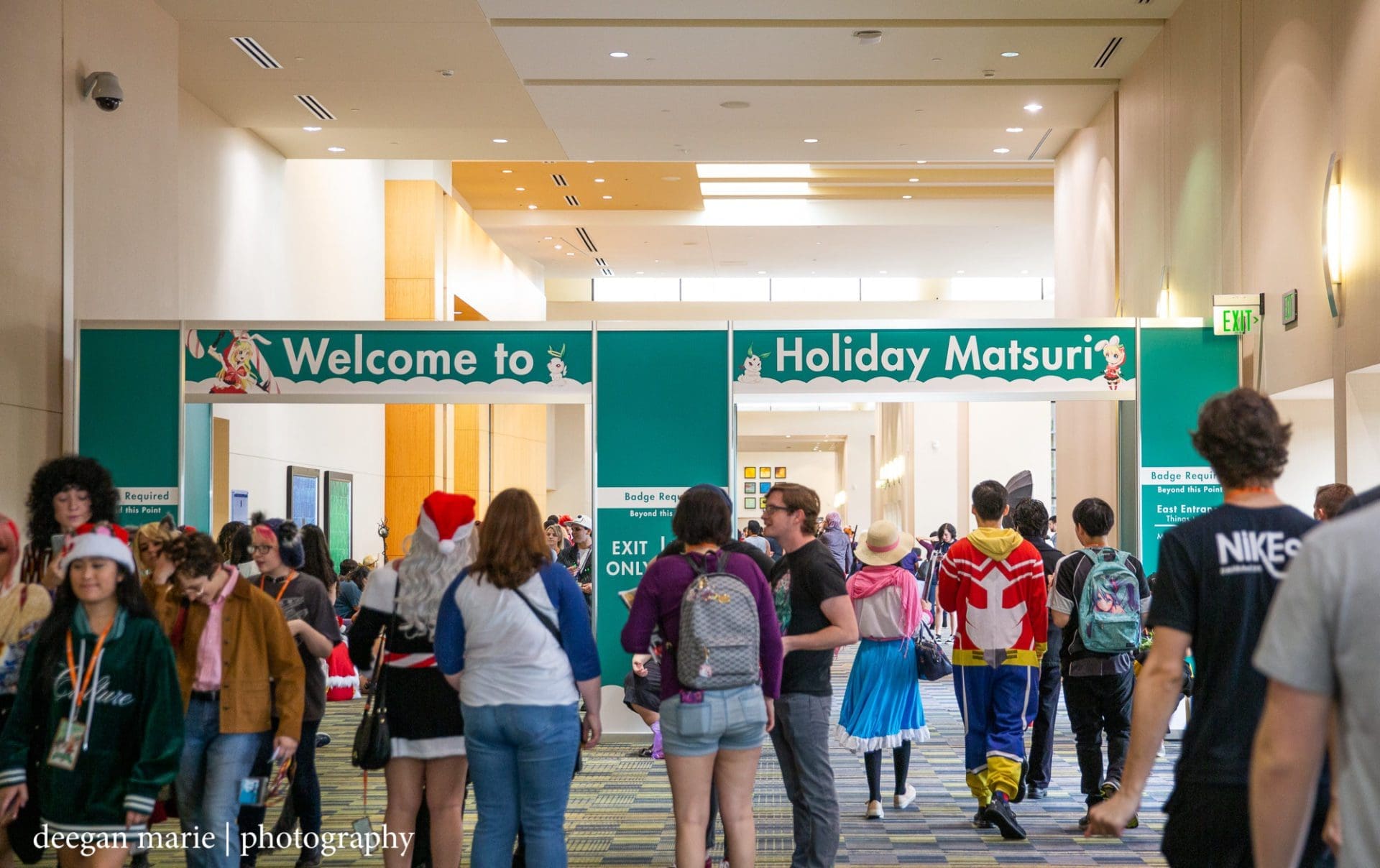 Hi all! I had the opportunity to go to Holiday Matsuri (Holmat) this past year for the first time and I was not disappointed. From the venue to the guests, everything was grade A awesome. Let’s get to the details.

The venue was in the GORGEOUS Orlando World Marriott Resort in Orlando. This resort was a great and convenient spot to hold a convention. Not only did they have normal hotel rooms, they also had 2 villa complexes as well. Plenty of space for accommodations. The best part, the hotel had its own convention center attached which makes it a perfect spot for a hotel con. There was plenty of places to eat inside, ranging from a Market Pantry, a cafeteria like spot, a Japanese steakhouse, to a pool bar and grill. While it was nice to have so many options so close, it did get a little pricey. Unfortunately the venue was kind of out on its own so there was nowhere to walk to for any cheaper options.

Other perks of the resort included the pool, which was absolutely beautiful! It had a very swanky feel to it, with TV’s hanging all around, a rock structure surrounding it, and the hot tub being in a cave. And did I mention every night at 9pm, it turned into a laser light pool show? However, one of the downsides of the hotel was that it seemed like the bars closed at 10pm every night. I’m not sure if that was their way to get people to buy the bottles of alcohol in the pantry downstairs, but it was definitely a bummer for some.

As far as the convention goes, I would give it an 8/10. I REALLY enjoyed this con, the badges were affordable, the events were different than most cons, on top of it being all around very friendly and inviting. It felt very inclusive and safe for everyone! When I asked the people I roomed with for comments about the con, every one of them said this con was a safe space for all. LGBTQ+, POC, plus size, everyone. Not saying that other cons are not safe, but this one in particular showed an overwhelming support of love and safety. Overall though, Holmat also seemed to be more of an adult convention. There were a lot of lewd cosplays, which everyone showed respect towards. On top of that, there were a plethora of 18+ panels and events. I covered a few of them, but the one that stuck out the most was Hottest Men in Anime. Boy was that event a trip! In a nutshell, it was basically an anime strip show. I was very entertaining, lewd, and spectacular. A couple things I found to be really fantastic about this con: a quiet room and the game room. The quiet room is such a perk for a con to have and I have never seen one at a con before! What a clever and thoughtful idea for con goers. The game room was stocked with some incredible games. I might be a bit biased, but the DDR machines they had, I’ve never seen such high quality ones. Whoever was in charge of that, they worked hard for those games and I can’t imagine they were cheap…

The vendor hall/artist alley was laid out like a dream. They provided plenty of space for aisles which is SO nice. You were able to move freely without large crowds stopping you. While that is a huge perk for many, the vendor hall did seem quite small in terms of how many vendors and artists they had present. They had a very unique feature, a live chalk artist! It was very cool to see them create a massive BNHA piece throughout the weekend. I’m not big into shopping at cons so I can’t give a great opinion on quality of vendors. However, I do wish they had more artists. I do look out for charms and pins and didn’t see as many booths with them as I do at other cons. All of the guests were also in the same room as the vendors and artists. I enjoyed this as I feel it brings more people though the vendor hall to get to the guests.

Since Holmat is during the holidays, the con had decked out the space in Christmas decor. Plenty of spots to shoot some cute photos in front of decorated trees, a Santa photo booth in which all proceeds went to a charity, and various other spots around the venue for a mini shoot.

Not all conventions can be flawless, unfortunately, there were a few hiccups. The most obvious one that I’m sure most people are upset about is the badge pick up line on Friday. Friday was the worst of it. The other days the lines moved quickly and were not long. It gave us flashbacks to Anime Expo. The badges themselves were of the worst design I have seen to this day. My badge ripped off the lanyard on day one. They were cheap paper designs, definitely not meant to be on a lanyard for long periods of time. I saw many people scouring the floor looking for their lost badges. As far as staff goes, I had mixed interactions. My assistant had a problem picking up his press badge as the manager was very rude until they saw he was press. As I was taking images in the vendor hall of the guests I was told I was not allowed to shoot in that area despite being press. During some of the events, if they were at capacity and large groups of people were leaving they would not let others enter. I understand being at capacity, however if large groups are leaving and you are denying others to enter, that is only hurting your reach on that event. Staff at the hotel were very helpful every time I had any questions.

Many cosplayers donned their adorable Christmas versions of their favorite characters. It was really awesome to see the creativity to come out of this convention. Although there was a lot of Christmas cosplay, there was still a good amount of normal cosplay. My Hero Academia was the star of this convention by far. The craftsmanship of this con was a bit higher than others I have been to in the past. You can tell east coast cosplayers really love this convention because they bring their A-game. That being said, all levels of craftsmanship were welcome with open arms. I always enjoy going to cons and seeing where the photographers gather to shoot. There was a circular area in the middle of the convention center that photographers set up. While it was in the middle of the building, it worked really well to be out of the way of con goers while also being a nice spot for photographers to set up gear. I did not make it to the masquerade as it was mid day on Sunday, however I heard great things about it.

Overall, I would say this convention is one I would put in my top 5. The venue is probably my favorite of any con I have attended. The layout of the convention is 10/10. I had a ton of fun for my first year and hope to attend again this year.

*Check out more of my photos from the event in our Holiday Matsuri 2018 photo gallery HERE!