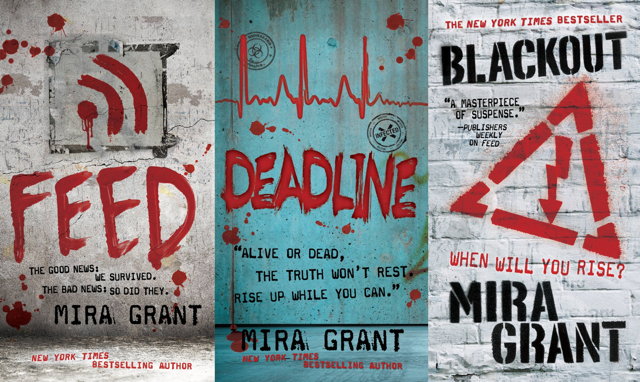 Do you think 2012’s political drama is suffering from a lack of the living dead?  If so, check out “Feed” by Mira Grant, which is the first in the deliciously titled Newsflesh Trilogy. Twenty five years after the zombie apocalypse, Georgia and Shaun Mason run the small but successful After the End Times news blog.  Their team is chosen to cover Senator Peter Ryman’s 2040 presidential bid, which seems uneventful until a suspicious attack on the campaign trail.  As they follow Ryman’s path to the White House, the Masons uncover a disturbing string of orchestrated outbreaks, and find evidence of a broader conspiracy implicating the very organizations designed to keep Americans safe from the zombie plague.  The Masons must find a way to get the news out and inspire the living to rise before being destroyed by the dead.

Grant is a master at world-building, and this universe is rich with details that make it feel realistic and believable.  For example, in a world strictly regulating human contact for the fear of infection, traditional media is overtaken by the isolation and contradictory availability of the blogosphere.  Bloggers tend to separate into one of three classifications: Fictionals (who write poetry and stories primarily to entertain) Newsies (who specialize in fact-based reporting) and Irwins (inspired by the late Steve Irwin, who seek ratings by going out and “poking things with sticks.”) I was easily convinced that this society could and would exist.  I was also impressed by the “science” of her science fiction.  In the Kellis-Amberlee virus, Grant does a good job of combining the tropes “the cure to cancer/the common cold results in the zombie virus” by adding interesting virology quirks to the mix such as Georgia’s retinal Kellis-Amberlee.  The live zombie virus in her eyes causes Georgia to wear sunglasses all the time — science becoming character development without ever feeling contrived.  And let’s not forget the driving force behind this series; the political atmosphere is emotionally charged and scarily believable.  If there are not already politicians out there currently conspiring to unleash the zombie plague to secure their seats in office, then we live in a kinder world than I believe in. Therein is the strength of Mira Grant’s Newsflesh universe: I’m terrified, but I totally believe it.

Make sure to get all three books at once—you won’t be able to stop once you start.  The conspiracy deepens in “Deadline”, and we are introduced to a cunning mad scientist and continuing dastardly deeds by the CDC. As I neared the end, I kept turning pages frantically, wondering how in the world things could get resolved! Without giving away too many spoilers, I must admit that I found the main character’s descent into madness annoying,  but aside from the massive plot bomb (you’ll know it when you hit it!) “Blackout” is a huge improvement.   In fact, despite my initial reaction to the last book’s HUGE plot twist (by throwing the book across the room) I ended up enjoying it for that moment of pure surprise when I realized I had played right into the author’s hands.  The evidence is right before you all along, but until everything comes crashing together you don’t really pay any attention.  My one true complaint in the series is the overabundance of “biting” blood tests.  Maybe it’s just my fear of needles coming out, but I swear that blood testers “bit” and drew blood WAAY more than zombies.

If you think that politics could use more zombies, definitely check out “Feed” and the rest of the Newsflesh trilogy.  Then get out and vote for the candidate you think will handle the zombie apocalypse best.  Lock your doors, load your guns, and get ready for an intense read!