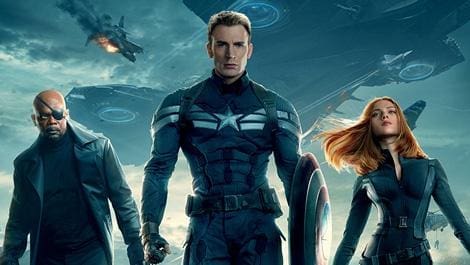 When the first Captain America came out I saw it more the reason that it was the next Marvel movie and I am a huge World War II buff and less that I was excited about it. I was, however, pleasantly surprised. I loved the look and feel of the movie. It wasn’t without its flaws, but it was all around enjoyable movie. I think the movie had itself backed up to a corner before it even came out because it was, for all intents and purposes, a prequel to the Marvel Cinematic Universe. The events depicted within had to be careful not to subvert anything that had been released before or anything in the pipeline. The filmmakers also had to be certain the story they wanted to tell because with the release of The Avengers looming the end of the movie had to feature Cap being frozen in the ice. In the end it did a good job of isolating itself while at the same time connecting and setting up future events. Captain America: The Winter Soldier is free of those shackles and it definitely doesn’t pull any punches.

I would like to state that Captain America: The Winter Soldier is the kind of sequel I would write. What kind of bugs me about sequels is that sometimes they completely ignore its predecessor. If we’re dealing with a X-Men: The Last Stand kind of situation where the future sequels attempt a restructuring of sorts to reset those events I like that, but when movies like Predators try ignore what came before, it bugs me to no end, especially when Predator 2 is a good movie in its own right. I went off on kind of a tangent there, but the point I was trying to make is that not only does Captain America: The Winter Soldier continue its logical progression, as all Marvel movies have done, it reintroduces old character(s) in a fun and interesting way, one of which kind of takes on a persona reminiscent of something out of Wolfenstein for about ten minutes.

One thing that Cap 2 suffers from, more so than the other Marvel movies, is a main focus on the bigger picture rather than the individual characters involved. In this instance it’s a weird double edged sword. While the arcs of the characters are fully realized and fleshed out, more emphasis is placed on the bigger conspiracy abound. And even though his name is in the title, The Winter Soldier doesn’t get much screen time and I think there was more there to explore, but I will say kudos to Marvel for not recasting the part like they are prone to do.

My main complaint from the first Captain America was it played it a little fast and loose with reality. Yes, Thor is my favorite Marvel movie and The Incredible Hulk is my second favorite Marvel movie and I realize that Cap is a genetically enhanced super soldier and I’m fully willing to suspend disbelief, but I found myself rolling my eyes more than once when he started throwing his shield around. Cap 2 still had the signature shield flinging, but I found myself thinking “that’s probably how a shield would fly if it could.” His suit has also gone through some interesting changes. In Cap 1 it was practical, but the design was silly (hold your comments). In The Avengers it was unpractical and less silly than the first, but still silly. In Cap 2 it was both practical and extremely slick. I liked it a lot and was bummed when he had to revert to his original suit. His helmet, though, is always goofy and I always breathe a sigh of relief when he ditches it.

Synopsis:  Steve Rogers struggles to embrace his role in the modern world and battles a new threat from old history: the Soviet agent known as the Winter Soldier.