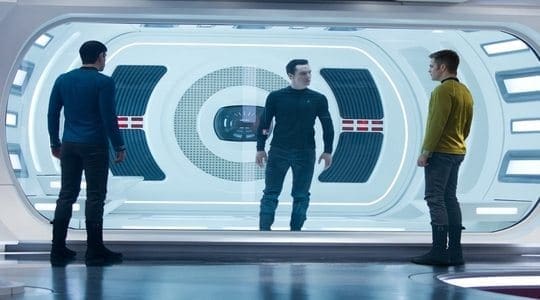 Soon after, Paramount Pictures brought Brad Pitt out to introduce “World War Z” and gave a sneak peek at what we can expect from the film. And man-oh-man does it look good, REALLY GOOD. Anyway, buddy Jim Lincoln wrote about his impressions on “World War Z” here. Then, “Star Trek Into Darkness” writer Damon Lindelof took center stage and introduced Chris Pine, Zachary Quinto, John Cho and Alice Eve. Together they all discussed their roles in the film and even Chris Pine mentioned that if you hadn’t seen the first film, not to worry, “Star Trek Into Darkness” is its own story.

First and foremost, this film looked downright beautiful. It was shot in IMAX format and post-converted into 3D later on. I would say it’s one of the best post-converted 3D movies I have ever seen. Anyway, it starts off with Captain Kirk (Chris Pine) and Bones (Karl Urban) undercover on some red-colored planet running away from some Nibiru people with what seems like a hasty escape. Meanwhile, there is a volcano on the red-colored planet about ready to explode, to where Spock (Zachary Quinto), Uhura (Zoe Saldana), and Sulu (John Cho) on are a shuttle and on a mission to stop the volcano from completely destroying the planet. Spock jumps down from the shuttle into the erupting volcano, and as lava waves are building, his rope breaks from the shuttle, and Spock is left for dead.

Then in the second half of the demonstration, it starts with James Harrison (Benedict Cumberbatch) who is being held at sick bay on the Enterprise. Kirk walks up and asks for Harrison’s help. Some words are exchanged, but Harrison agrees to help Kirk. It seems there might have been a dogfight between the Enterprise and another vessel, and Kirk and Harrison must get from one vessel to another. However, the tricky part is they must fly through space and land into a small hole in the other vessel. Scotty (Simon Pegg) is a key in this scene because he must open the small hole so that they can fly through it. Kirk and Harrison shoot through space, dodging and maneuvering through all the debris. Kirk breaks his helmet and must rely on Harrison to get them through the small hole. While all this is happening, Scotty is trying his best to open the hole when a security guard stops him and demands what is going on. Scotty is running out of time, as Kirk and Harrison are rapidly approaching the vessel, and Scotty flicks the switch opening the small hole and the security guard disappears into space. Meanwhile, Kirk and Harrison barely make it through the hole and skid across the airlock floor.

Overall, the 18 minutes I saw of “Star Trek Into Darkness” was highly enjoyable. The visuals were fantastic, the action scenes were tense, the music score was memorable and acting was spot on.

“Star Trek Into Darkness” will hit IMAX 3D theaters on May 15, arriving everywhere May 17.

About CinemaCon
CinemaCon will attract upwards of 5,000 motion picture professionals from all facets of the industry –from exhibition and distribution, to the equipment and concession areas – all on hand to celebrate the moviegoing experience and the cinema industry. From exclusive Hollywood product presentations highlighting a slate of upcoming films, to must-see premiere feature screenings, to the biggest stars, producers and directors, CinemaCon will help jumpstart the excitement and buzz that surrounds the summer season at the box office.

About NATO
The National Association of Theatre Owners (NATO) is the largest exhibition trade organization in the world, representing more than 30,000 movie screens in all 50 states, and additional cinemas in 57 countries worldwide. NATO’s membership includes the largest cinema chains in the world and hundreds of independent theatre owners, too.