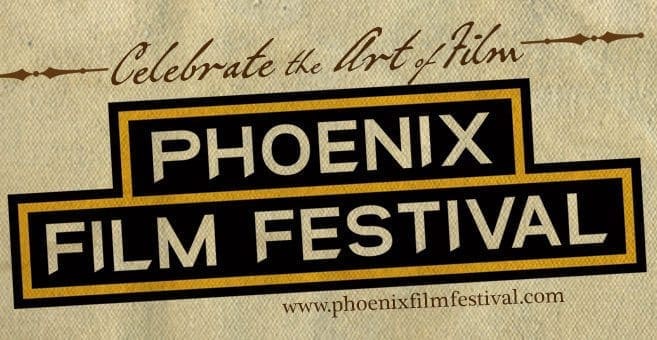 Phoenix, AZ – This weekend saw the opening of the Phoenix Film Festival, in conjunction with the International Horror and Sci-Fi Film festival.  The opening ceremonies were Thursday night, while the main programming started on Friday, and lasted until Sunday.  On Sunday night, the awards for the best films of the show were announced, and they will be shown throughout the week to give festival goers another opportunity to see them if they missed out the first time.
This was one of the most organized, well-run events that I have been to.  The program was very informative, well laid out, and had a handy index and schedule so you could quickly look up what was playing or what theater your film was in.  The volunteer staff all wore distinctive red and white shirts, so they were easy to spot in a crowd.  All of the volunteers that I spoke with were extremely friendly, well-informed, and willing to help out with any questions.  All of them were also film-lovers, so if you could catch one during a lull, they could give you some insider tips on the best films to see.
There were six theaters playing movies throughout the day, with a seventh theater being opened up for special events.  There was also a party pavilion, which offered industry panels, a silent auction, and a place for attendees to gather, drink, and network.  Not being in the industry, and not being much on networking, I pretty much spent the entire weekend going from theater to theater.  Here are the capsule reviews for what I watched.

Love in the Grave – To be honest, I saw this film by mistake.  I got to the festival early, and had some time to kill.  I knew there was a vampire film being shown, and I saw this title was being shown in the timeslot, so I put two and two together and got five.  This was not a vampire film, but rather a documentary made for Czech television about a group of homeless people living in an abandoned graveyard outside of Prague.  (The horror film was called Kiss of the Damned, and I did not manage to see it.)  Despite the lack of undead, this was a well done documentary, focusing on two of the homeless, Jan and Jana; we are shown their day-to-day lives, their living conditions, their attempts to obtain documentation so that they can begin to improve their lives, and how they cope with the news that their graveyard is being renovated and that they must find new accommodations.  A touching film with some beautiful camera work.  This film had a Q&A session afterwards with the director of Photography, and some advertisements for an upcoming Czech Film Festival in Scottsdale in May.

Horror Shorts – This was a collection of 8 short films from all over the country and Canada, ranging from a  fake trailer to a few 15 minute stories.
The shorts included:
Play Dead – This was originally an off-Broadway play that was performed in New York in 2010; two of the productions were filmed and spliced together to make this film.  Written by Teller of Penn and Teller and performed by famed Coney Island showman Todd Robbins, this was an attempt to recreate old-time horror shows.  As the host, Todd Robbins would speak about famous killers, kooks, and con-men, and then summon them to the theater, using various tricks and effects to freak out the audience.  This was a highly entertaining film, although I would not recommend it if you are at all squeamish, or have problems with absolute darkness.  Teller did a Q&A after the film, glossing over the fact that most people don’t think he can speak.  I sort of regret seeing this film, because they have plans to take the show on tour, and now that will be less fun since I know what is involved.
Los Wild Ones – This is a documentary about Wild Records, a small indie record label in Los Angeles specializing in Mexican rockabilly.  The film revolved around the founder, Reb Kennedy, and the family of musicians that grew up around him.  The business is growing to a point where Reb cannot handle it all alone, and he must deal with expanding his business, trying to find an entry into the modern world of digital downloads and social media, all the while playing father figure to the many musicians on his label.    This was a fun film giving an inside look into the lives of the musicians and their label.  Lots of great music.  Oddly, there was no real drama; everyone was like a big family, and any conflicts were handled in an adult, responsible manner.  The director and a few of the musicians were on hand for Q&A after the film. This film won Best Documentary for the festival.
The Ghastly Love of Johnny X – This was a black & white retro 50s psychedelic musical about delinquents from outer space.  The Ghastly Ones, a gang led by Johnny Xavier, are sentenced to Earth until they can commit one unselfish act.  Instead, they quest for The Resurrection Suit, an object of amazing power, and get caught up in a plot to put on a show by a recently deceased rock singer.  This film was weird and funny, with strange dialog and oddball effects.  This film was littered with cameos, including the late Kevin McCarthy, Paul Williams, Creed Batton from The Office, and Reg Bannister from the Phantasm films.  The writer/director/producer, along with the music composer and the director of photgraphy, stuck around after the film to answer questions and hand out movie posters.
They Live – The classic 1988 John Carpenter film starring Roddy Piper as a homeless construction worker who stumbles on to an alien plan to conquer the earth.  Originally intended as a critique on Reagan-era politics, it holds up quite well in today’s #Occupy culture.  It was great to see it again on the big screen, although there was a slight technical difficulty that was quickly resolved. Co-star Meg Foster was around for a Q&A session and autograph signings.
Found in Time – This was my favorite film of the festival.  This is a Philip K Dick-inspired film about an alternate present where people with psychic powers, called Vendors, are harassed by Trawlers, the Psychological Police Force who use their info to prevent future crimes. The main character, Chris, has the ability to pick up objects that will be useful to someone at a later time.  His powers cause him to slip in time, so that he does not experience it sequentially.  When he sees himself getting murdered in the future, he must pull himself together to try and change that outcome.   This is not an easy film to understand; there is no exposition, as the director trusts the audience to figure out the important details without the need for a clunky voiceover or crawl.  If you like intellectual science fiction, I would highly recommend seeking out this film.  The director conducted a Q&A after the film.
The Favor – An up-and-coming advertising  executive asks his best friend from childhood to help him dispose of the body of his mistress, who died accidentally while they were fighting over their relationship.  The friend begins to ask for more and more favors in return, until the inevitable brutal climax. This film was well done, but really had nothing out of the ordinary.  The characters all seemed like stock movie types: The driven business executive, his shallow, social-climbing wife, and the slacker best friend.  The end should surprise no one. The director and one of the actors were on hand for a Q&A afterwards. This film won Best Screenplay for the festival.
He’s Way More Famous Than You – This was about  Halley Feiffer, an out of work indie actress with a bad drinking problem, and her efforts to create a film with which to stage her comeback, while attempting to drag in any A-Listers she can get her hands on. I walked out of this film about halfway through during a particularly unfunny vomiting sequence.  The main character was horrible; I’m sure she was supposed to be seen as quirky and cute, but she was a narcissist who cared only about herself and her booze, and treats everyone she encounters rudely, unless they can help her in her quest for fame.  With no likable characters and no real humor, there is really nothing in this film to recommend. The producer was here for Q&A, and his parents were in the audience.  I hope they are ashamed of him. This is one of the two films in the festival that I know are getting a wide release.  I fear for the plight of the unexpecting audience members.

A Cape Among the Cogs: An Observation of the Wild...