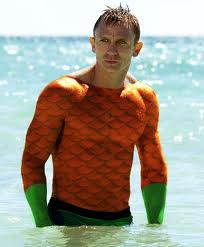 Recently, Wired’s Geek Dad blog published an article entitled “10 Reasons There Won’t Ever Be an Aquaman Movie”.  The author, Curtis Silver, is a self-proclaimed Aquaman fan, and presents several cogent, reasonable arguments as to why an Aquaman film will never see a major studio release.  However, because he is an Aquaman fan, he is dead-wrong by definition.  Because I am not only the first line of defense against all things aquaphile, but a habitual list-writer, I present my rebuttal in the form of a Top 11 list. 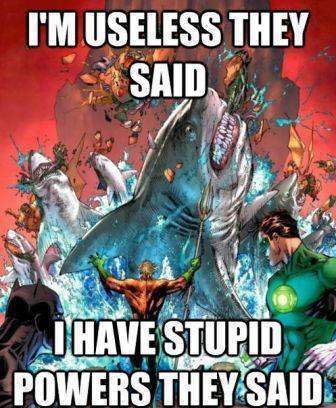 Despite Mr. Silver’s claim that Ocean Master is Aquaman’s greatest enemy, the villain for an Aquaman film would have to be Black Manta.  Due to his appearance in the beloved Superfriends cartoons of the 1970s, Manta is the only Aquaman villain that has any sort of name-recognition outside of hardcore comic book fans.  Plus, he has a great costume, cool themed gadgets and vehicles, and an awesome voice modulator.  He is also the only well-known super-villain that is an African-American.    The role would be a great way for an up-and-coming black actor to really strut his stuff in a high-profile action film, and would provide a role-model for young black kids who want to grow up to rule the world.

Thor is Australian, Superman and Spider-man are British, Batman is Welsh, and Green Lantern is Canadian.  All of our best superheroes are being sent overseas.  Hiring a stereotypical California surfer dude would draw a line in the sand, and help keep the superhero roles in the country that created them.

On-screen superhero costumes have been drawing from an increasingly narrow selection of colors.  All of the heroes are dressed in blues, blacks, and greys, with an occasional splash of red or yellow.  Even Spider-man, whose traditional costume is mostly red, went all-black in that one movie we’d all like to forget about.  Aquaman’s orange-and-green costume would bring a refreshing splash of color to an otherwise drab genre, and maybe lighten the mood a bit for a public still recovering from the grimness of Christopher Nolan’s Batman trilogy.  As an added bonus, any designer that can make an actor look good in an orange-and-green costume is sure to win an Oscar for their work.

4. An Aquaman Film Will Keep the Entourage Cast Where We Can See Them

There was a sub-plot in the HBO series Entourage that saw the lead character starring in an Aquaman film, so it would be only natural to continue that trend and put the cast in any real Aquaman project that might develop.  This is a good thing.  Any major studio superhero movie shoot is certainly going to be long and involved, and while the Entourage cast is filming Aquaman, they won’t be able to infect a movie that you might actually want to see.

An Aquaman movie, if successful, could pave the way for a movie about the Justice League Detroit.  For those of you who are unaware of the term, “Justice League Detroit” was a dark time in comic book history, when Aquaman disbanded the traditional Justice League, and replaced them with a group full of unknowns: a Martian, a gypsy, a witch, a roboty guy, a break-dancer, a supermodel with animal powers, and a stretchy guy.  They were not playing at the same level as Superman, Batman, Wonder Woman, and the other ex-Leaguers.  However, two of these characters were Vibe and Vixen, a young Hispanic male and an African-American female, two demographics that have never been adequately represented in a superhero movie.  (The Catwoman film in no way meets the criteria for “Adequately represented”)

6. Revive the genre of Superhero Comedy

Films like “The Green Hornet” and “My Super Ex-Girlfriend” attempted to add elements of comedy to the superhero genre, with little success.  Aquaman is already universally acknowledged as a joke, so adding some comedy to his film should be easy.  Just imagine: while trying to stop his enemy’s evil plot, Aquaman must look for clues in downtown Phoenix in July, and hilarity ensues!

Global climate change is a growing concern, and an Aquaman movie would be a perfect opportunity to showcase this issue.  70% of the world’s surface is currently covered with water; the prospect of melting ice caps and rising oceans extending Aquaman’s domain should scare even the most hardcore Conservative in to capping carbon emissions.  Just think of the advertising slogan.  ”If you do not buy a hybrid vehicle, Aquaman wins!”  Terrifying.

8. Aquaman Would Provide a Post-Olympics Career for Michael Phelps

Michael Phelps’ record-breaking wins at the 2012 Olympics have made him one of America’s most beloved athletes, but where does he go from there?  It’s not like he can now go pro and enter the National Swimming League.  Soon, the Wheaties endorsement money will run out, and poor Michael will be on the streets and doing drugs.  An Aquaman film would be the next logical step for him, providing a bridge from amateur sports to professional acting.  There is precedence for this: Buster Crabbe was a gold-medal winning swimmer in the 1932 Olympics before going on to star as Flash Gordon, and he did not murder anyone or join any gangs once he became an actor.

9. Aquaman Provides a Superhero That People Can Relate To

Batman was a billionaire orphan who devoted his life to fighting crime and avenging his parents. Superman was an orphan from an other planet who devoted himself to truth, justice, and the American Way; Spider-man was a super-genius orphan who had to live up to the great responsibilities that his great power brought him.  Although they are all great characters, there is not much there for a normal guy with living parents to really latch on to.  Aquaman is a mopey guy who can swim good.  He was King of Atlantis for a while, but decided to blow it off, and currently just swims around, doing what he wants, living off whatever treasure he can find at the bottom of the ocean.  That is a work ethic that most of us can look up to.  Plus, parents can rest a little easier knowing that their kids won’t off them to further their superhero fantasies.

10. A Self-Parody Would Remove The Sting From All The Other Parodies

In addition to the blog that you are currently reading, Aquaman has been parodied on The Family Guy, Robot Chicken, South Park, The Big Bang Theory, and is routinely mocked at every comic book store on the face of the planet.  If DC Comics did a movie showing Aquaman as a no-talent third-stringer, blundering around while trying to do the right thing, it would take power away from the haters, and show that DC Comics is “Hip” and “In on the joke.”  The model for this could be Peter Seller’s Inspector Clouseau , a bumbling incompetent who always managed to get his man throughout a string of popular films.

11. It will be the final nail in the Aquaman coffin

Let’s face it, as much as I love DC Comics, their track record with movies that do not include the word “Bat” in the title is pretty horrendous.  Even when the movie is based on a property published by a subsidiary (Constantine, The Losers) or is based on a non-superhero character (Jonah Hex), DC’s non-Batman movies haven’t been any good since Kal-El was told to kneel before Zod.  With this in mind, a terrible high-profile Aquaman movie is just what the world needs to prove once and for all what a ridiculous character this guy truly is, and maybe we can put this long nightmare behind us and grow as a people.

Follow more of NegativSteve’s rants on Aquaman on his Tumblr: Steve Hates Aquaman.

Stranger Things Meets The Internet In ‘INTO RADNESS’