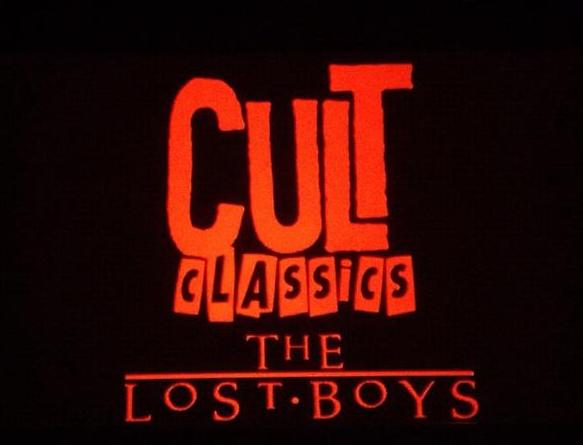 Tempe, AZ – Cult Classics AZ kicked off its first film at its new venue Saturday night with a showing of the 80s vampire classic, “The Lost Boys.” There were treats for the first fifty people in line, and Zia Records had a small booth outside the theater where they sold Lost Boys and Vampire related merchandise. The founder of Cult Classics, Victor Moreno, was also on hand selling shirts and prints, including his new print of the standout characters from the film, the Frog Brothers. Before starting the film, there was a short pre-show. Victor introduced the film and asked everyone to be cool during the screening. Mary from Zia Records raffled off some shirts and Zia gift cards. Before the movie began, the audience was treated to an animated short featuring heavy metal condiments telling them how to behave in the movie theater, and then a few previews of films that are up for consideration for future showings. The last preview to be shown is always the film that will be screened next month, and the crowd went wild when they realized that it would be Beetlejuice. There were some slight technical issues with the film at first, as can be expected at a new venue, but once it got underway, the 200+ viewers were treated to a beloved classic on the big screen. Many of the attendees were parents that had seen the movie when it was first in the theaters, and were bringing their kids to see it for the first time on the big screen.

Cult Classic is dedicated to a monthly showing of quality “cult” movies on the big screen. Previously, they have shown films such as Teenage Mutant Ninja Turtles, Gremlins, Battle Royale, and Back to the Future. They had been doing showings at the MADCAP theater in Tempe, but due to AC problems, were forced to move to the Pollack Family Cinema in Tempe. This theater was a lot of fun even before the movie started; it is jam-packed with cardboard stand ups and replicas of movie characters, some kind of fuzzy animatronic music band, and a large scene from one of the Pirates of The Caribbean films. I plan to go back to this theater in the next week or so, just so I can get some time to take pictures of their collection of props and lunch boxes.

If any of this sounds like fun to you, or if you just like watching your favorite films on a big screen with a group of fans, then check out their webpage Cult Classics AZ, or like the Cult Classics AZ page on Facebook, and keep up with the latest schedule of events.