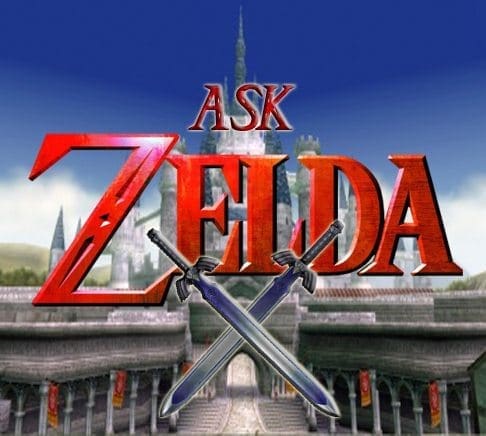 Dear Zelda,
Whats your take on the Zelda timeline that Miyamoto gave out during the release of Skyward Sword?
–Ryan R. via Twitter

Well, I must say that even I’m unsure of what’s happened when. I suppose it’s because I spend most of my time kidnapped and imprisoned. The days, months, even years run together, and I can’t remember if I was kidnapped yesterday or a month ago, or for what reason! (Sometimes it sucks being blonde!)

Have you heard of the movie “Shuffle”? It’s about a guy who, every time he wakes up, he wakes up at some random point in his life. One day he’s 25, the next he’s 8, the next he’s 90. That’s kind of how my life feels, like I’m always jumping around in it!

(Seriously, though, any type of timeline trying to be introduced AFTER so many games have come out is bound to be ridiculous, so I don’t even bother. I love the games, so who cares when they happened?!)

With love (and a little residual confusion),
Zelda

Hrm, that’s a ridiculously hard question. I love so many of them, however the one I keep coming back to would have to be The Crow. He’s the Anti-Hero, he’s not bound by any set of rules, and he’s tortured, nearly broken, but love sees him through until he’s accomplished what needed done to be at rest. I generally dislike the “perfect” heroes who never mess up, as, come on, that’s completely unrealistic! I gravitate towards the darker heroes, so The Crow, I think, would be the best choice.

Then again, if I were to answer this tomorrow, I might say Batgirl, so take it all with a grain of salt!

By Odin’s Beard (and with love!),
Zelda

Dear Zelda,
What in your opinion is the best RPG Classic from 90’s?
–Joseph Q. via Facebook

Hey Zelda,
My roommate takes up all the TV time in the in living room playing Xbox, he won’t buy his own for his TV, are there any games you can recommend for the computer that might have such an addicted affect as the Xbox games? Should I dish out for an Xbox controller for the computer to make the transition easier?
Thanks, John F. via Facebook

Well, without knowing what type of games you like, I can’t really recommend any PC replacements. However I would suggest getting an Xbox PC controller, as that might make it easier to game for long periods of time if you don’t like mouse/keyboard gaming.

Or, and this might be a better idea, tell your roommate to go away and let you play your Xbox. If he’s a jerk about it, then you have a few options. You can do something simple, like take away the controllers when he’s not around, so that he can’t play, or you can go into the “Family Settings” section on your 360, setup a pass-code, and then setup either game ratings control (which will allow you to block any games with a given rating unless you’ve got the pass-code) or setup the “Family TImer” so that someone can only play at certain times, for so long, unless they’ve got the pass-code.

If you’ve got a question you want answered, you can email it (Mrs.ZeldaX@gmail.com), shoot it to me on Twitter (@ZeldaXAZ) or head over to my Facebook page and ask it there! (If you’d prefer to remain anonymous, just let me know!)