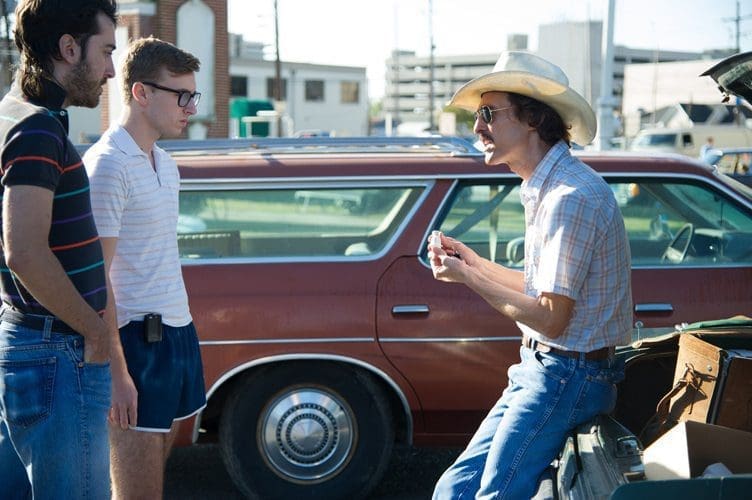 Matthew McConaughey has had a noticeable resurgence in his career as of late. In the 90’s he began acting in films like Dazed and Confused, A Time to Kill, and U-571 which are some of his most noteworthy performances during that time. As soon as the 2000’s hit his career began on a rocky path by taking more paycheck roles and only doing a couple of films that allowed him to showcase his acting ability. Within the last few years he has become a significant actor again by stepping out of the spotlight and taking more independent films that permit him to show that there is more behind his pretty face. Director Jean-Marc Vallée is able to give McConaughey the opportunity to perform such a role in his new film entitled Dallas Buyers Club.

The film takes place in the 80’s and is the true story of a Texas electrician named Ron Woodroof (Matthew McConaughey) who is a man that hates gays and loves women. He drinks, he smokes, he uses drugs, and he has vast amounts of unprotected sex. One day he has a job related accident and finds himself waking up in the hospital. While there, the doctors run blood tests which come up positive for HIV. The news gets out that he is HIV positive and his friends disown him because to them only homosexuals get the disease.  With a diagnosis of only thirty days to live and the need for HIV treatment, Ron gets a tip that a doctor in Mexico will be able to help him with medication. While there, he gets the idea of selling the drugs to other HIV patients in the U.S. because the FDA has not approved the drugs as of yet. This is one of the most touching and tear-jerking films that I have ever seen. McConaughey gives a lasting performance that will leave you both amazed and in awe. Every chance he gets, he chews up the screen and makes Ron Woodroof a character that you care deeply for. It’s not only the fact that he lost a significant amount of weight to play the role but it’s the fact that he allows the audience to empathize with his situation that gives his portrayal such an impact. To add to the phenomenal performance bucket would be that of Jared Leto in the film. He plays a male transvestite named Rayon whom Ron reluctantly partners up with in order to help grow their HIV drug business. Leto’s presentation of a man that wants to be a woman is so uncannily good that at times he made me believe that he really was a woman. He is the perfect addition to Ron’s I-don’t-give-a-shit attitude that it helps attach some levity to the film’s mostly harsh and unforgiving tone.

The film is uncompromisingly gritty and is so in order to shed light on what HIV patients had to go through in the 80’s just to receive treatment. The film is also a showcase of what to me are McConaughey and Leto’s best performances to date. The talents that those two men possess are what make this film an absolute joy to watch. If you are looking for a film that will leave a permanent impact on your life as well as demonstrate what actors can do with unbelievable material, then Dallas Buyers Club is a film that I can’t recommend highly enough.

Synopsis: The true story of a Texas man named Ron Woodroof who was diagnosed with HIV and decided to try and help other people afflicted with the same disease.

“You’re Not You” Movie Review