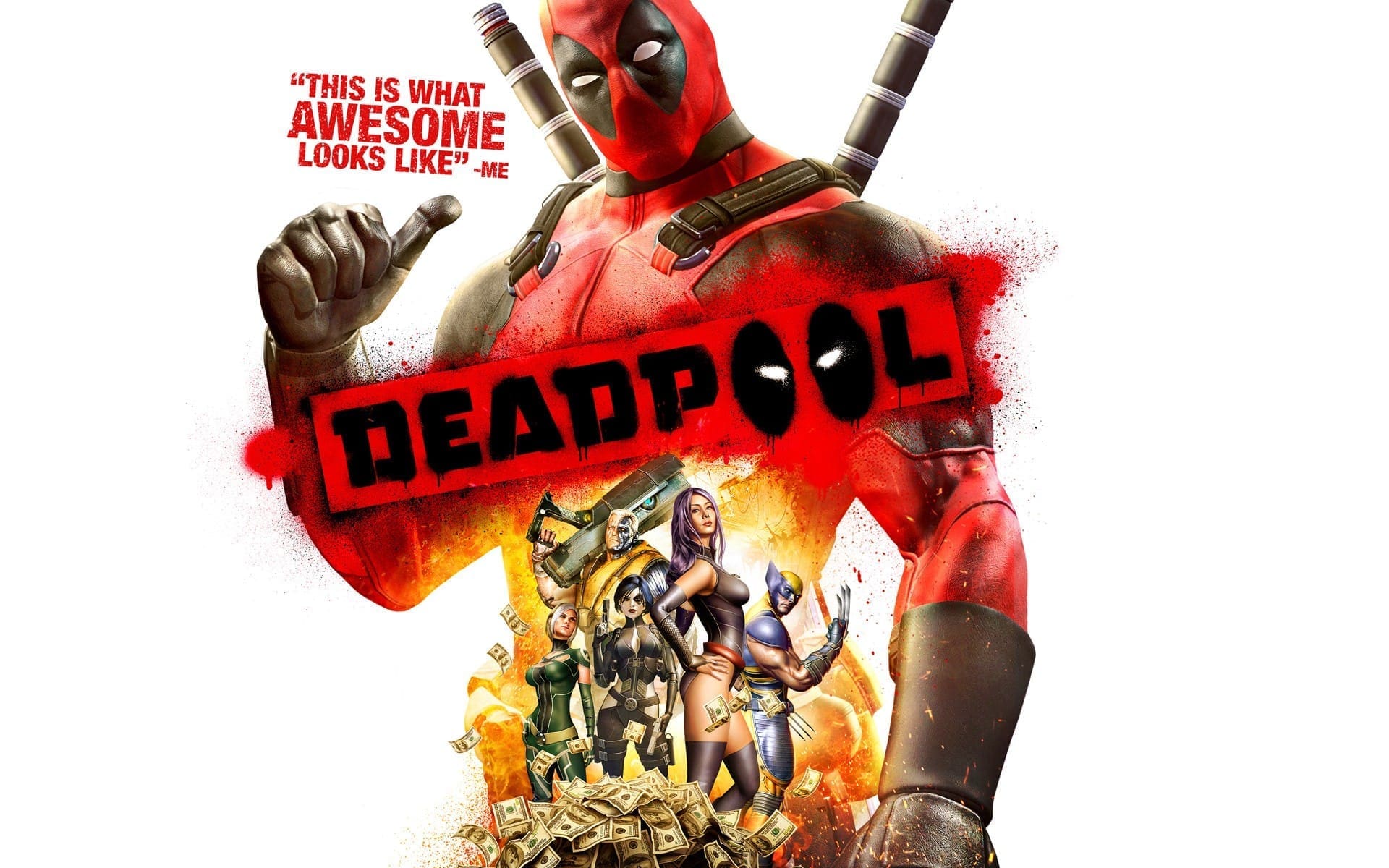 Deadpool is a third-person action game based on Marvel’s crude and rude Anti-Hero. It was developed by High Moon Studios, published by Activision, and was released on June 25th for the Xbox 360, PS3 and PC. Deadpool was written by former Deadpool comic writer Daniel Way, and was voiced by Nolan North who has done extensive Deadpool voice acting. But would this game live up to Deadpool’s standard of awesomeness, or would it fall flat like many other superhero games? I guess you’ll have to keep reading to find out!

The story of the game starts with Deadpool accepting the mission to assassinate Chance White. However, Mister Sinister messes up Deadpool’s mission which costs him money, so for the rest of the game you seek revenge on Mister Sinister. Deadpool follows him to the former mutant haven of Genosha, and along the way you learn that he has been collecting mutant DNA to use in his army. There are quite a few other Marvel characters you will encounter on your search, such as Wolverine, Rogue, and Cable, who you get to fight alongside with. Mister Sinister brings his Marauders as well, with Arclight, Blockbuster, and Vertigo making appearances.

Deadpool The Merc with a Mouth:

The character of Deadpool was by far the best part of the game. The voice acting was phenomenal and the writing for his character was excellent. I think they really captured what Deadpool is all about, and they did a great job translating him from the comics to the game. He is rude, crude, possibly sexist, and still insanely hilarious. This was one of the funniest games I played, with lots of great one liners and funny spins on regular gaming situations. He has got to be one of my favorite characters I have played in a video game. If you’re offended by crude potty, humor then you probably won’t care to play this game. But if you can handle lots of obscenities, you’ll like this character. He was a lot of fun, but some of the gameplay has flaws and really takes away from the game as a whole. I am borrowing this clip from Jovenshire of Smosh Games, but this is probably one of the funniest bits from the game:

When I look at a game, I look at story, character development, and gameplay, and while the Deadpool character was great, and the story was okay, the gameplay was the worst part of the game. The basics of the combat system were light attacks, heavy attacks, shooting people with guns, and teleportation. Also, if you became low on health, you could run away while it regenerated. The attacks themselves were pretty good, as you could create decent combos. The guns were a bit hit or miss though, literally. When you went to aim, it auto aimed on an enemy, however on several occasions, it would auto aim to the left or the right of the person and your shots wouldn’t hit. This was a bit annoying when in the heat of the battle. Yes, you could just aim yourself, but that always takes more time, and the combat in this game is pretty fast paced. One thing I really liked about the guns was that you could shoot behind you while running away. This was quite handy on several occasions. The teleporting feature is one that I did like, but it was a bit annoying to use at times. When in combat you can teleport away from the group you’re fighting four or five times, depending on if you have upgraded it. Then it has to cool down, which is fine. But as you’re fighting, you can counter an enemy’s move with the same button as the teleport button, and if you don’t time it perfectly, you don’t counter. Instead you teleport away, which got annoying real fast. Overall, the basic combat of the game was actually pretty decent; it was other aspects of the gameplay that weren’t that great.

When you progress through the story, you’ll face a lot of the same enemies over and over… and there are a ton of them. It also takes a while to beat some of them down. I would think Deadpool would be able to take these guys down relatively easily, but the combat sequences just take forever and really drag on, getting old relatively fast. I would have to say my least favorite part of the game was the Boss fights. Early on and towards the middle of the game, you will have a boss fight of some kind in each chapter, which are ridiculously easy. You just go in for a few attacks, then teleport away as you regenerate health. There’s not a lot to them. Towards the end of the game, they decided to just throw the kitchen sink at you, with an endless swarm of regular bad guys, and a mix of bigger boss types. But instead of coming up with good enemies that are hard to defeat, they throw numbers at you instead. Instead of one big character you already had to defeat earlier, they throw three of the same type at you at once. I think this was a bit lazy, and they could have come up with better bad guys that were really tough to beat.

There were a few things that I liked in the gameplay though. One thing being the stealth aspect of the game. There were only a few times that you used it, but you could sneak up behind a bad guy and execute or slice and dice them. These were really entertaining, but there was not a lot of it in the game. Another thing that I did like were some of the retro gaming parts. There were a couple instances where the game turned into a platformer, and it was a nice break up from the regular combat. Towards the end of the game, you meet up with Death and from there it gets a bit crazy. However, some missions you do with Death are the best parts of the game. They were great little breaks from the normal aspects; I only wish there were more of them.

There are quite a few weapons and upgrades for the weapons that you can buy with Deadpool Points, which you earn throughout the game. You start off with a standard handgun, but you can then purchase a shotgun, a machine gun, and a pulse rifle. You also start off with your standard swords, but then you can buy Sais and giant hammers. You can upgrade all of these blades and guns to make them do better combos, making them more powerful. That’s about the extent of the upgrades. Along with these, you can buy flash and frag grenades, bear traps, and land mines. My favorite build in this game was the hammers with the pulse rifle. The hammers were the biggest, slowest weapon, but they also do the most damage. You can also upgrade them to do even more damage and stronger combos, which made them a great weapon for taking out hoards of enemies.

The challenges were a decent game mode that you could unlock throughout. In one of these stages, you’d have three minutes to take out three waves of enemies. It added a decent amount of replay value, but I wasn’t crazy about them. The combat in the game was already a bit tired, and just going through a bunch of enemies like you do in the story wasn’t that fun. I would have really liked separate levels – maybe not from the story, where you could play co-op with a friend. Maybe one person could play as Deadpool and the other as Cable. I know it’s Deadpool’s game, but you did get to fight alongside Cable in a few scenes, which was awesome. Deadpool is a tricky game to summarize because the character was so great, and he really was the star of his own game. However, the gameplay itself wasn’t that awesome, and the game time was only about five to six hours long. I would have loved a big sandbox game like the Arkham games or maybe even like GTA, where you can play as Deadpool and you can follow the missions, but also do whatever you want. He deserves a big game like that. This game was extremely linear, and I wanted more Deadpool overall, as opposed to annoying fights with endless baddies and boring boss battles. While Deadpool was a great character who was funny and entertaining, this game wasn’t that amazing.