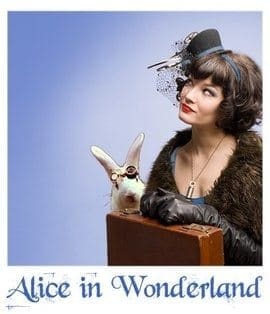 Desert Rose Theatre’s steampunk Alice in Wonderland had its premiere on Thursday October 18th, and it is a show not to be missed. This charming headlong fall into fantasy is an original adaption of Lewis Carroll’s tale written and directed by Katherine Stewart.

Kelly Turner as Alice is not your typical curious little girl. She is a young woman of adventure and mischief who takes pleasure in describing all the things children must not forget – such as that a hot poker will burn you and a knife will make you bleed – much to the distress of her sister Kitty (Faith Willman).

That is not to say that the innocence of the story is lost, for she would still follow a fluttering late white rabbit simply to find out why he wears a waistcoat. In fact it’s that innocence and cheerfulness, the knowing that “everything will turn out alright”, even as the Queen of Hearts is yelling for heads to roll, that keeps Alice from being far grimmer than it could be.

The show has been promoted as a “steampunk” take on the tale and while some recent outings of theatres nationwide fall in to the cliché of “goggles and glue some gears on it”, that is not the case here. The costumes and set are wonderfully designed and show that the designers have a true understanding of the genre. (Though I wouldn’t expect anything less from a theatre where the actors discuss the latest episodes of Dr Who and the artistic director would know exactly what you were talking about if you said “Darmok and Jalad at Tanagra”.)

Here are some of my favorite things about DRT’s Alice in Wonderland (and there are so many more!) in no particular order:

The actors bring the characters to life with energy, imagination and fun. The White Rabbit (Carson Saline) is properly nervous over the Queen’s impending displeasure. The Cheshire Cat (Kellen Garner) leaps and frolics with the kind of confidence only a cat could have in such a mad world. the Mad Hatter (Joshua Hunt) is both outrageously insane and touchingly sympathetic. Each character is larger than life than the one before, building to the crescendo of the Queen of Hearts (Diane Senffner) and her court. Yet even with all their antics you never lose sight of the fact that this is Alice’s journey. Everywhere you look on the stage (designed by Jennifer Shoemaker) at any given moment something is going on. And the show is so well paced that you don’t even realize you’ve been sitting for almost 90 minutes without an intermission til curtain.

Alice in Wonderland runs through Nov 3. Tickets can be purchased in advance through DRT’s official website at: