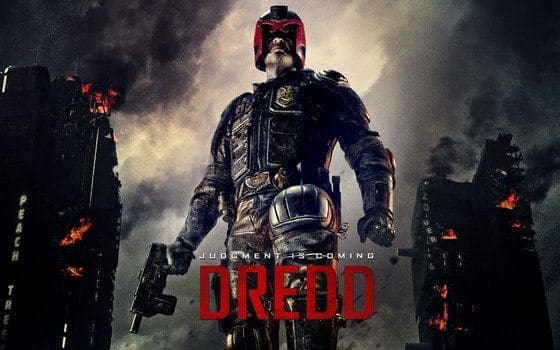 I actually wrote this review twice. I thought it would be a good idea to let a toddler explore my iPad. While I was cheerfully watching her say her ABC’s and pressing the corresponding key she, through some magical combination of button presses, managed to delete all of the text. So for the second time, let’s get started.

Dredd does for the Judge Dredd character what Batman Begins did for Batman. Unfortunately, based on early box office estimates this looks like the last we’ll see of Judge Dredd, at least for now. At that is a real shame because Pete Travis (Vantage Point) really delivers an excellent movie from a screenplay by Alex Garland (Sunshine).

One of the things to note in Dredd is the character development. My favorite happened to be the character of Anderson played by Olivia Thirlby. Anderson is a mutant with psychic abilities and it also happens to be her first day as a judge. This type of scenario has been done in movies before where the rookie comes on board and they don’t know much, which makes you wonder how they passed the training in the first place, and by the end they make this huge arc to a hardened know it all whatever. Where Dredd differs is that, while Anderson is a rookie, she isn’t afraid to get her hands dirty and I was never afraid that she was going to flub things like most movie rookies do. The character of Dredd played by Karl Urban shouldn’t be ignored either. While Stallone played Judge Dredd as a badass who knows he’s a badass and thinks he’s invincible, Urban makes him a badass, not because he knows it, but because he has to be. It’s a violent and dangerous world and he can’t afford to make any missteps. He’s tactical and calculating because he knows he’s not invincible and that makes him even more dangerous.

Mega City One looks and feels like a 1980’s Detroit from the future. There are no flying cars or motorcycles. I’ll be the first to admit I’m a fan of the original Judge Dredd and one of my favorite things from it were the mutants and the giant robot. I kind of missed those in this new vision, but there were no places for them. This time around it’s grounded in reality and centers around the characters and not so much the fantasticalness.

My one complaint is the use of high-speed cameras. Usually when a movie has a gimmick (bullet time) it’s used too often. In the case of Dredd it’s not used enough. The movie features a drug called slo-mo that makes the brain perceive time at 1% its normal speed. There’s a few cool scenes featuring the drug, Dredd breaching a room and someone falling from the 200th floor, but I just felt it was a missed opportunity for some slow motion action.

I’m not familiar with the source material, although now I will check it out, and I hope you will check out this movie and give it the love it deserves because I would like to see more from this cinematic universe.