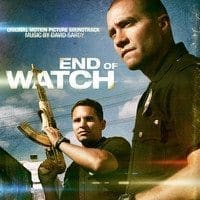 Every once in a while a movie comes along that really makes you connect with the characters and makes you care about what happens to them. End of Watch happens to be one of those movies. Jake Gyllenhaal and Michael Peña had a chemistry that made me believe that these two really were best friends. As a matter of fact the chemistry between all the characters made the entire movie feel like they cut the final product out of the behind the scenes footage. I’m still waiting for the real movie. Now don’t misconstrue those comments as a dislike for the movie, my feelings are far from it. I actually think I had something in my eye toward the end…

When dialogue in movies is cringe worthy it’s usually for one of two reasons. 1. It’s just plain awful. Terribly written and terribly acted (Resident Evil 5). 2. It is how people naturally talk. It just sounds weird because you’re watching it (United 93). End of Watch is more toward the United 93 spectrum, but with a twist, it flows and it’s not cringe worthy. It doesn’t hurt that most of the movie follows Gyllenhaal and Peña around and both of them are solid actors, again with great chemistry.

I honestly wasn’t looking forward to End of Watch, however, I had faith in director David Ayer as he had written and/or directed other exceptional cop dramas like Training Day, Harsh Times, and Street Kings. Ayer has this ability to transfer the pain of his characters mistakes to the ones they love. Christian Bale to Freddy Rodriguez in Harsh Times, Keanu Reeves to his friends in Street Kings, and with End of Watch he takes it to the next level. I won’t give anything away, but the pain affects not only his family and friends, but the entire police force as well. The interesting part of this movie was that it was shot in the “found footage” style of filmmaking (which I hate), but this one isn’t afraid to ditch the point of view of the cameraman and just go “documentary style.” The only thing I thought was weird was that at least one character from each group had an obsession with a camera and always had one in their hand. There was also no stupid disclaimer at the beginning like “this is only known footage of blah blah blah.”

Tension is one of the most difficult things to portray on film. Too many cuts or sound effects can distract from what’s happening and ruin it. I could literally hear my heartbeat pounding in my chest during several scenes and this is something that rarely happens to me. I love watching movies, but I’m like a zombie when I do, so for a movie to affect me like this is a pretty big feat. End of Watch is like a two-hour long, unrated episode of cops and that is ok by me.

“THE HOBBIT: AN UNEXPECTED JOURNEY” Review

Why Him? | Movie Review