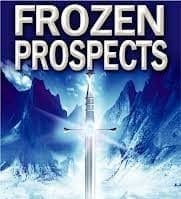 Frozen Prospects, by Dean Murray made me very happy. It was just a great story. I also felt an akinness to the author when I read his about the author and found multiple similarities:

Dean started reading seriously in the second grade due to a competition and has spent most of the subsequent three decades lost in other people’s worlds. After reading several local libraries more or less dry of sci-fi and fantasy, he started spending more time wandering around worlds of his own creation to avoid the boredom of the ‘real’ world.
Things worsened, or improved depending on your point of view, when he first started experimenting with writing while finishing up his accounting degree. These days Dean has a wonderful wife and two lovely daughters to keep him rather more grounded, but the idea of bringing others along with him as he meets interesting new people in universes nobody else has ever seen tends to drag him back to his computer on a fairly regular basis.

Dean Murray crafted a wonderful environment in Frozen Prospects, established without boring the reader to death with direct information in long-winded descriptions. I flowed right through this book, wishing it were longer when I reached the end (though Part 2 is already in the works, I understand). The first chapter of the second book was available in the version I read.

A cold, snow-filled world requires the people to live in caves, many kept warm by the magic gems the secretive Guadel create over decades for this purpose. Va’del, an orphan, and outcast, in his home village, is asked to come to the capital city to learn to become one of these notorious Guadel. There is little choice but to agree to travel through the cold world to this far away city, where this secretive group live and train.

Va’del was a character both believable, and likable, his potential making him someone to reckon with, while his background creates an air of unknown around him. When he meets Jain, I found myself genuinely happy for the character, and wishful that real people might allow their compassion to rule their worlds more often.

The ending was a bit fast. I would have liked to have had the final battle extended a bit more, though in reality, the way it’s written is very- well, realistic (from the perspective of the author’s universe, etc). Even so, I wanted to see Va’del kick some more butt before the end, just to rub all the snotty elitists noses in it.

I feel the YA genre has taken over this type of fantasy, making this book an even greater find! This is how I remember fantasy to be. Not over the top with the flashy; not beaten down by teen angst, but driven by character and story. Thank you Mr. Murray for this!

I was also brought to ponder the idea (again) of what makes a good story while reading this. This book, by Dean Murray, while very good, still reads a little elementary at times. It was a thing I couldn’t quite put my finger on, but did notice every once in awhile. Maybe the flow of the sentence structuring? Maybe the use of particular words? Definitely not enough to take away from anything, but enough that I noticed this… somethingness about the language. Or maybe I’m some kind of weird word snob… either way, great book that I give 4 out of 5 stars to!

The Kindle edition of this book is currently… FREE! Get it here