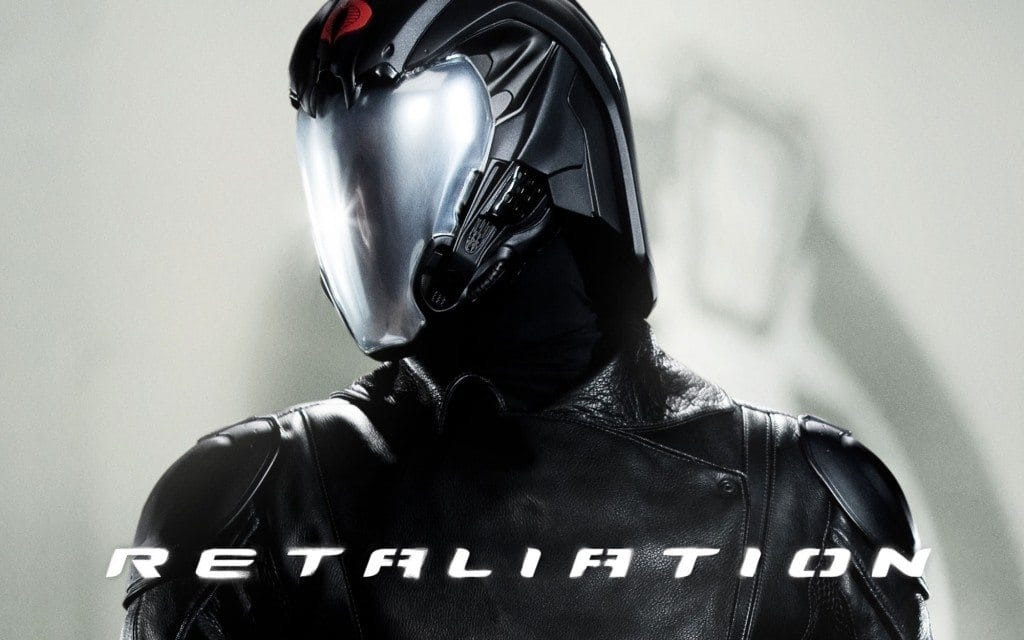 I wouldn’t necessarily say that I grew up on the original G.I. Joe TV series. I had the movie, the one where Cobra Commander slowly turns into a snake and the weird reptilian amoeba lady, and later in life Cartoon Network would show reruns of the show at night before I passed out. What I was more familiar with were the toys. I had everything from the small 4-inch guys to the big 12-inch behemoths. This isn’t to say I wasn’t familiar with the characters, because I was, I just wasn’t familiar with the story lines. In 2009 when the first movie was released I didn’t know what to expect. I’m not a purist, so I’m not going to sit here and say “that’s not a G.I. Joe movie,” because what is? Personally, I think the original story line was pretty clever in explaining certain things like how Destro got that tin face. Yes, Stephen Sommers was a weird choice, but honestly, I’ve never not liked one of his movies. They’re not good movies technically speaking, but they are enjoyable. I mean, we’re talking about a cartoon wherein one of the main bad guys wears a cobra headdress, so I’m not sure what the complaints were about. But that’s not why we are here. We’re here to talk about the follow-up, G.I. Joe: Retaliation, so let’s get started.

Sometimes when a movie makes so much money and the studio wants a sequel, but the first one was less than liked by fans, the knee jerk reaction is to make the sequel but forget all about what had happened before, or even forget certain installments of the series (see: Super Returns which was a sequel to Superman 2, but not 3 or 4. Fox is also doing this with X-Men: Days of Future Past, but in a more clever way). Every once in a while though, the studio moves ahead with a sequel that acknowledges the original, but at the same time says “alright look, we messed up, this is still a sequel, but we’re going to fix things and do it the way it should have been done the first time” (see: Alien vs. Predator: Requiem). This later was the case with G.I. Joe: Retaliation. The movie picks up right after the first one and even gives us a little back story into what happened during the interim. This time around the controls have been handed over to Jon Chu, the director of Step Up 2, Step Up 3-D, and the Justin Bieber movie, and you thought Stephen Sommers was an odd choice. Chu is a self-proclaimed fan of G.I. Joe and I think his love of the franchise really comes through in the story elements and the action scenes. Remember, this is a G.I. Joe movie and not Zero Dark Thirty so there are some fantastical elements, maybe not as much as the original, that can be eye rolling if you’re not going in fully prepared. For example, at the beginning the Joes raid a compound to supposedly steal back a nuclear war head, but they don’t sneak in like the SEALS, no, they’re party crashers. They burst in guns ablazin’ with no discernible plan of attack other than “hey, I’m on your side so don’t shoot me.” This soon leads to the Joe’s camp being attacked, which is probably the coolest scene in the movie, no wait, I take that back, it’s the second coolest scene, but more on that later. After the camp is destroyed, spoiler, so are most of the Joes, and if you’ve seen the trailer to this movie, or seen any movie, or have just a basic understanding of story then you know who survives. The president, who’s not the president, condemns the Joes and the remaining members are forced to defeat Cobra and clear their name.

The helicopter attack is really where the movie should have started. One of the main complaints of the original is that there are too many story elements going on. Retaliation is no different. One of my favorite moments of the original was when Cobra Commander finally became Cobra Commander so I was jacked to see him in this one, unfortunately he’s in for a grand total of like 12 minutes. He’s such a menacing character, but he spends most of the time behind a proverbial shroud. When he ducks away at the end, like all villains do, it’s very unceremonial. The Joes apparently have this vendetta against him because he killed Duke, oops, but when he gets away they act like a kid who missed the ice cream truck, “oh well, he’ll be back tomorrow.” Hopefully they’ll play him up more in the inevitable follow-up.

There are a lot of cool elements in the movie. One of which involves nuclear disarmament of the world’s super-powers so Cobra can take control with its own weapon of mass destruction, which is one of the coolest things I’ve ever seen. It involves dropping this giant tungsten rod from space that when dropped does some pretty significant damage to Great Britain, or any country that might be unlucky enough to be in its way. The only problem is it isn’t introduced until the last thirty minutes of the movie and the Joes somehow knew about it. The other element is the fabled ninja fight. You’ve seen a portion of this in the trailer. Snake Eyes and Jinx are tasked by RZA, yes, to travel to this mountainside to capture Storm Shadow so he can help aid the Joes. Things go awry when a bunch of red ninjas don’t like that they’ve kidnapped their boss. A zip line infused, cliff side ballet ensues in one of the best uses of post-converted 3-D I’ve ever seen. I felt like I was actually mountain climbing when they started to fight, “oh look, honey, ninjas. Let’s watch.”

G.I. Joe: Retaliation is solid attempt to correct the faults of the first movie, while building upon its successes, in order to win back the love of fan boys. As a fan of the original I can say to you that this one is definitely worth checking out.